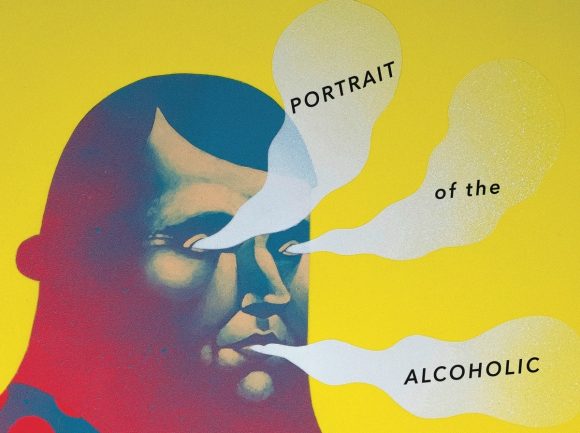 I carried Kaveh Akbar’s Portrait of the Alcoholic around for weeks before I actually read it. In that time, the slim book traveled from Boston to New York and Washington, D.C. with me. It went to four libraries, two protests, and one bar. I do this from time to time when I know a text is going to challenge me beyond the ways in which poetry is always challenging; I like to prepare for a confrontation. I had ordered Akbar’s debut chapbook a few days after my friend Eli died from a heroin overdose, and my own relationship to addiction was changing in ways I still, months later, don’t understand. When the book arrived after the new year, I left it in its cardboard envelope and put the whole package in my backpack.

I had read “Some Boys Aren’t Born They Bubble,” which appears as a sort of prologue to the chapbook, when it was first published in Puerto del Sol. In the poem, the boys that “bubble / up from the earth’s crust” seem to accidentally survive the demands of their own desires. “When they dance their bodies plunge / into space and”—against all odds—“recover.” In other words, there is always an afterwards for them. Or a hangover. Eli was like that, always hungry or bleeding or disappeared until he resurfaced. Both of us were. Being alive, as Akbar writes in a later poem, “seemed so effortless.”

On one hand, Akbar’s cadenced poems are about the alcoholic’s complex relationship with addiction. The speaker addresses his cravings the same way one might talk to a longtime companion. “To hold you / always seemed as unlikely // as catching the wind in an envelope,” he writes in “Portrait of the Alcoholic with Craving.” Verses move back and forth across the page as the speaker simultaneously longs for and resists his thirst, which hums loudly at night “like a child / put in a corner.” Despite the noise, despite its relentlessness, dependency is regarded with a sort of tender acceptance: “I don’t mind / much; I have never been a strong sleeper, and often // the tune is halfway lovely. Besides, if I ask you to leave / you won’t.”

In his review of Portrait of the Alcoholic, Christopher Nelson explains it is through this simultaneously ruthless and compassionate self-scrutiny that the speaker personifies his addiction:

He renders three-dimensional the engulfing reality of the relationship between drinker and drink. And it is a relationship, as nuanced as those we might have with living beings, a relationship with history and memory and expectations. Here alcohol is gracefully and painfully personified; it grows in our minds as we read through these poems, as a character does in a novel.

In this way, each portrait is also an epistle; Akbar’s portraiture reflects the shared history of the addresser and addressee, “the drinker and the drink.”

On the other hand, the book is also about the poet’s relationship to language. In “Calling a Wolf a Wolf (Inpatient),” the speaker attempts to control his cravings by naming them, as if the signifier would protect him from the signified. “I’ve given this coldness many names,” Akbar writes, “thinking if I called a wolf a wolf I might dull its fangs.”

But the right words often elude him. “I don’t remember how to say home / in my first language, or lonely, or light,” the speaker explains in “Do You Speak Persian?” The speaker’s struggle with language plays out over the course of Portrait of the Alcoholic, indicating a deeper conflict between his Iranian childhood and American upbringing:

I remember only
delam barat tang shodeh, I miss you,

Are you still drinking?
Shab bekhair

For so long every step I’ve taken
has been from one tongue to another.

This back-and-forth between tongues and, by extension, selves only makes the speaker thirstier. Beyond wanting a drink, he wants to remember the words he has forgotten, to be satiated, to rest. Over the course of the collection, he goes on to question his use of verb tenses and words. He fuses colors into one-word combinations like “bluebrown” or “bluewhite.” And he creates his own adjectives by hyphenating similes: his thirst is “lonely-as-the-slow-charge-into-a-bayonet thirst.” Maybe this is another form of craving.

When Eli died, I didn’t know what to do. I called friends on the phone and made a list of all the stupid things he had somehow survived. I drove across Massachusetts to go to his funeral. Eli loved despair, which meant he loved Roberto Bolaño. He’d nagged me about reading 2666 for years. I eventually gave in when I found a worn copy in the basement of my apartment building. Though I couldn’t bring myself to reread it just then, I took it to his funeral.

I had never been to a Jewish funeral before, but I watched his family members use the back of a shovel to move small mounds of dirt into his grave and, when my turn came, tried to do the same. As I passed the shovel to next person, I thought about a line from The Savage Detectives, another novel by Bolaño: “We interpret life at moments of the deepest desperation.” I wanted it to be true.

In Portrait of the Alcoholic, these moments of desperation aren’t interpreted as much as recalled or replayed; each portrait depicts a collision of dependencies, languages, and memories. Unfortunately, desperation doesn’t always lead to understanding. But Akbar’s work succeeds, in the words of Christopher Nelson, through what it “renders three-dimensional.” By recalling these moments of desperation and simply making them visible, the poet transforms them into something that might just be understandable.