Home
»
Uncategorized
»
This Is Not a Breakup Letter 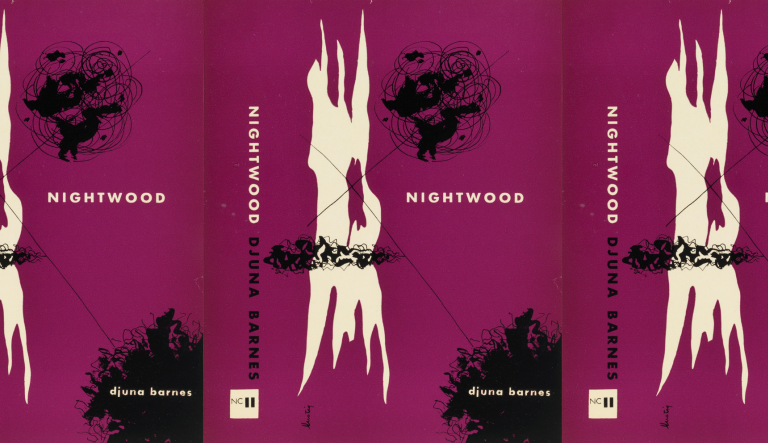 Look. It’s nothing personal, but every time I start reading Nightwood, I get four pages in and quit.

Even T.S. Eliot writes, in his introduction to the novel, “When I first read the book I found the opening movement rather slow and dragging…”

The splendor and pain begin with Nightwood‘s Faulkner-length first sentence:

Early in 1880, in spite of a well-founded suspicion as to the advisability of perpetuating that race which has the sanction of the Lord and the disapproval of the people, Hedvig Volkbein–a Viennese woman of great strength and military beauty, lying upon a canopied bed of a rich spectacular crimson, the valance stamped with the bifurcated wings of the House of Hapsburg, the feather coverlet an envelope of sating on which, in massive and tarnished gold threads, stood the Volkbein arms–gave birth, at the age of forty-five, to an only child, a son, seven days after her physician predicted that she would be taken.

I love the “military beauty” and “tarnished” elegance, the strange act of giving birth in 1880 at forty-five. However, there is a certain trudging involved for the reader, a trudging that, for me, begins with enthusiasm and ends with fatigue pages later. Djuna, your prose is smart, but often mud-thick.

But this failure to dig in–it’s me, not you–I think.

I know your biography, and the biographies of women you loved. I’ve read your journalism, plays, poetry, Ladies Almanack, and criticism of your work. I recently checked out your Selected Works from a private library. I own copies of other publications, including the creepy Creatures of an Alphabet, which smells like the last owner’s cigarettes. (And that line about the donkey practicing solfeggio–I thought that was really quite dirty, until I realized it was a singing technique.)

You’re incisive, thorough, a swell drawer, and have an envious vocabulary (e.g. bifurcated). Fascinated by you for years, I named one of my first chickens Djuna. I’m pretty sure you wouldn’t like that a bit. You never struck me as a girl with a sense of humor.

I put nothing past you and expect to be delighted, shocked, and humbled by your work. When I can get through it, that is. I know I can’t profess to understand you or comment further on your oeuvre until I’ve read your most important work. My inability to finish Nightwood is an irritating failure.

So here’s my question: why can’t I fight my way through your novel? I want to read it. Where is my stamina? Where are my tools and tricks? It shouldn’t always be easy, right? I should be prepared to work for the satisfaction of finishing a difficult book.

Part of me worries I won’t like Nightwood any more than I like the first four pages. I worry I’ll decide you’re aping Joyce (I know, I know–who hasn’t succumbed to influence?).

The other part of me is lazy. I can’t find the easy way in, the low resistance route to literary pleasure. (Did I mention I have a one-year-old?)

And still there’s another part of me who’s worried I just won’t get it–and what does that say about me? It reminds me of Megan O’Rourke’s essay “Unfair Sentence,” an admirable and level-headed response to the infamous B.R. Meyers essay on “purple” prose, “A Reader’s Manifesto.” Meyers expressed his disdain for the establishment’s current praise of literary fiction, which he felt was “everything written in self-conscious, writerly prose.” O’Rourke posed that a dislike of difficult books was related to “a buried anxiety about cultural elitism, a peculiarly American distrust of showiness and artiness.”

Djuna’s overt nod to style, or her “artiness,” is a barrier to an easy read of the novel. But what kind of reader am I? I don’t balk at artiness. I’m open minded, and usually hungry.

When I recently brought your Selected Works home, and vowed to try Nightwood again, I went back to O’Rourke’s essay. This is the line that got me: “But the danger of Myers’ irritation is self-evident: It implies we needn’t ever challenge ourselves as readers. It wants a literature of lucidity and leaves little room for mystery.”

I want challenge and mystery! I want to dig deep and slog and look up from the work days (hours?) later with satisfaction. Djuna, I hereby confront my laziness, and vow to finish the book, and report back in a future post.

What I hope I’ll discover is what T.S. Eliot promises in the conclusion of his introduction to the novel: “What I would leave the reader prepared to find is the great achievement of a style, the beauty of phrasing, the brilliance of wit and characterization, and a quality of horror and doom very nearly related to that of Elizabethan tragedy.”
If that is the case, dear Djuna, the years-long fight will be worth it.

This is Megan’s seventh post for Get Behind the Plough.