Home
»
Interviews
»
“This is not a time for frivolity or entertainment”: An Interview with Cecille Pineda 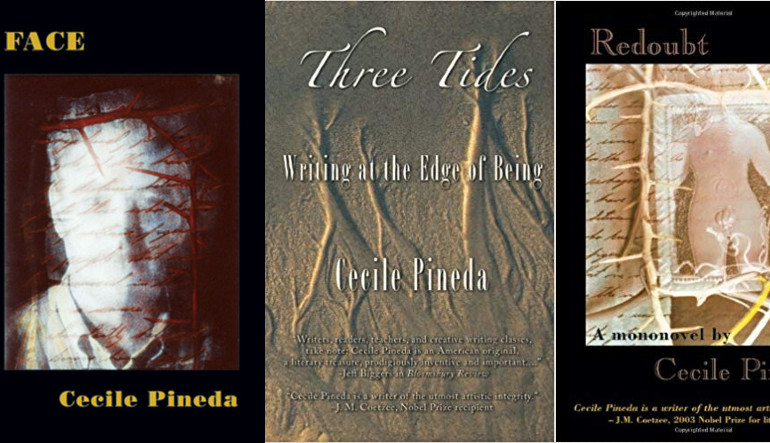 In the thirty-four years since Cecille Pineda’s debut novel Face was published, she has established herself as a writer and activist with a profound sensitivity to the lives and stories of those living at the world’s margins. Face chronicled the story of Helio Cara, a favela-dweller in Rio de Janeiro who, after a horrible accident, begins the arduous task of reconstructing his own face. A classic of Chincanx literature, the novel offers a moving depiction of the struggle of recognition and embodiment by marginalized people. While the novel was met with considerable critical acclaim at the time of its publication, its renown has only grown over time—it was a finalist for the National Book Award for a First Work of Fiction in 1985 and, many years later, became a finalist for the 2014 Neustadt International Prize for Literature.

After Face, Pineda published five more novels: Frieze (1986), The Love Queen of the Amazon (1992), Fishlight: A Dream of Childhood (2001), Bardo99 (2002), and Redoubt (2004). In the years following September 11th, 2001 and the continued incursions of American imperialism around the globe, Pineda also began to write nonfiction, which spoke to her activism and sense of justice—Devil’s Tango: How I Learned the Fukushima Step by Step (2012), Apology to a Whale: Words to Mend a World (2015), and Three Tides: Writing at the Edge of Being (2016). Pineda’s fiction grappled with narratives around marginalization and displacement, with her later works, what she called mononovels—short books filled with the intensity of feeling, venturing into experimental and radical directions. Her nonfiction continues in this vein, using environmental degradation as its primary point of inquiry.

Pineda, who was born in New York City in 1932 to a Swiss-French mother with American citizenship and an undocumented Mexican father, came to fiction from the stage. Following a move to California in 1961, she founded and ran the Theatre of Man in the San Francisco Bay Area. After nearly twenty years in experimental theater, she shifted to writing fiction and nonfiction. She is currently at work on Palimpsest, a work that explores the possibilities of a life and culture erased from her upbringing.

I recently spoke with Pineda, whom J.M. Coetzee called “a writer of the utmost artistic integrity,” about Face, its enduring legacy, and the extraordinary story of her family.

Nishant Batsha: Why did you write Face? You already had a career running an experimental theater company at the time. Why did you turn to fiction?

Cecile Pineda: I have to be very honest. I wrote it to make money. I had a godmother who was in her last years, and she was afraid she was going to outlive her meagre savings. She had been a schoolteacher all her life in a very prestigious and progressive school in New York City. I was very devoted to her in a way that I did not find it in myself to be devoted to my own direct family members. I thought, “I’m going to write a fantastic novel. It’ll make piles of lucre and I will be able to support her final days in comfort.”

That was my main motivation. However, it goes back a little further in time to an article in 1977 in the San Francisco Chronicle. I read a fill article on the back page about a man in Rio de Janeiro who had reconstructed his own face. He had done so because he had suffered a catastrophic facial accident. What interested me about that was not the sensationalism of a destroyed face, but rather that he was a working-class person, a marginalized person, who grabbed his living where he could.

NB: Were you drawing upon your own background in radical theater when you were conceptualizing Face?

CP: No, I can’t say that. But certainly, my background in radical theater was extremely formative for me. There was no way it was going to be absent from anything that I did, so its presence was unconscious.

There were two other factors that prompted me to do this. One was that Reagan came to power in 1980. The funds for the arts began to dry up, and so did the survivability of my own theater company. That was an important factor.

There was another important personal factor, which was that my family had broken up. It was certainly the first test of my life. Though I was being supported with alimony, I released my husband. I told him that I, from henceforth, would take responsibility for my family—and I did. I was raising two sons. So, with the demise of my theater company, I was retooling myself. A year before I hung that up, I started to write what turned out to be Face.

NB: How have readers reacted to Face since its publication?

CP: It has become rather iconic. It is read in faculties all over the United States, even though it was published back in 1985 by Viking Press. One of the student remarks that most warmed my heart was from a professor in San José. When the class finished reading it, a Latinx student said, “This novel is about us.” When I heard that, I felt like I had done my job.

NB: Given that it’s now a classic of Chicanx literature, I’m struck by the fact that the back of the first edition was so sparsely designed—there were no blurbs when it was first released, right?

CP: It does have one blurb! It says “speaks of interesting things in interesting ways,” if that isn’t certain death.

I appeared in New York on the half-shell, so to speak. I was in my fifties already. The editor who bought the novel at Viking asked me, “Who are your friends?” I took that to mean, “Who should blurb this book?” I said I didn’t have any friends, because this wasn’t my world. It didn’t occur to me to say anything else because I had friends in theater circles.

She said, if you don’t have friends, what writers do you like? I adored Coetzee at the time. He had published Dusklands and what I think is his best book, Waiting for the Barbarians. I had no idea that Coetzee would go on to win two Bookers and the Nobel, but I admired his lucidity as a writer. So, I said Coetzee, and they sent him a galley. I’m not sure if he ever opened the envelope.

I was disappointed because I really wanted him to read this book! So, I sent it to him later with a letter. Ever since, we’ve had a correspondence. I’ve sent him all my work. He’s always been very encouraging, and he’s very funny! In very few words, of course.

CP: After 9/11, I began to write nonfiction. It’s not that I stopped writing novels, but I abjured writing novels. This is my take on things: we have not entered a frivolous time by any means, and this is not a time for frivolity or entertainment. This a time for very serious thinking and very serious examination about where we have come as a species. Nothing frivolous can answer those questions.

NB: Since then you’ve written about environmental degradation and displacement. What are you working on now?

CP: My latest book is called Palimpsest. The reason it’s called that is because it’s two texts, one on top of the other. One is my life story.

I was born to a Mexican father who was educated at Harvard and his interest was linguistics. He taught Romance languages at [City College of New York] in New York City when I was born. Children, being what they are, accept the realities around them as normal. From a very early age I understood that things were extra-normal, though I couldn’t articulate what they were.

When I was four, my father took me to see an eclipse. We were outside and he gave me a photo negative to hold up to my eyes to protect them. When I went to hand him back the negative, he wasn’t there. He disappeared.

Finally, I had enough self-possession to ask, “Why do you disappear like that?” And he said, and I quote, “I need to see what you would do.”

NB: Your father was an undocumented Mexican migrant. Did he ever reveal that fact to you?

CP: He was terrified of what might happen to him and me because from 1931 to 1938, 1.8 million Mexicans were swept up from the streets and deported. He wanted to protect me, and to appear and pass as a gringa.

It occurred to me at a certain point in my writing life that there might be unconscious traces of my true history that my father had withheld from me. I began to think about that and consider how my father hid behind my mother because of her papers. My father never took US citizenship. If he tried, he would have been embarrassed by many questions, namely, how did you get here in the first place?

Could he have hidden behind her whiteness? Was he in fact a person of color? Of course!

It occurred to me one day that I would Google my grandfather because I knew his name. I thought finding him there was most improbable, because my father presented his father as a two-bit lawyer in Mexico City.

But I Googled him, and to my absolute astonishment discovered that he had been immensely illustrious! He was born in Juchitán in 1851. It was a town that had been loyal to General Diaz in driving the French out of Mexico. Incidentally, my great-grandfather was one of those Frenchman. My grandfather was illegitimate and half-Indian.

To reward that town, General Diaz selected six promising young men to be educated at public expense. My grandfather had been one of those men. From there he went to the city of Oaxaca to the Institute of Arts and Sciences and grabbed a law degree under the mentorship of General Diaz’s brother Felix Diaz.

Because he had made this connection with Diaz, who eventually became president of Mexico, he began a political career as a lawyer. He represented the town of Juchitán in the National Assembly. From there he proceeded to be reelected, and so forth, until he became one of Diaz’s favorite cabinet ministers. He was also half-Indian in an otherwise white European cabinet. What did that mean? My cognition about that is that there must have been daily insults that perhaps were not said, but were felt. He died young, at 63. All of that I didn’t know a year ago.

NB: Has this changed the way you’ve viewed yourself?

CP: These are the things that stamp me as a writer and thinker from the very beginning. This is the link to come back to my origins as a person of Central American descent whose father ran the risk of deportation. To cap the whole thing, I discovered that those deportations began a year before he married my mother. The circumstantial evidence seems to make a very good case for what I believe to be my back story.

There’s much more to Palimpsest. It’s an act of mourning for a culture that’s been denied to me. I’ve felt that pain from very early on. When it seizes me, it’s a crippling pain. My father, as much as he turned his back on his past, was fundamentally Mexican. That’s what I feel I lost.