Home
»
Critical Essays
»
This Land is My Land, Not Yours 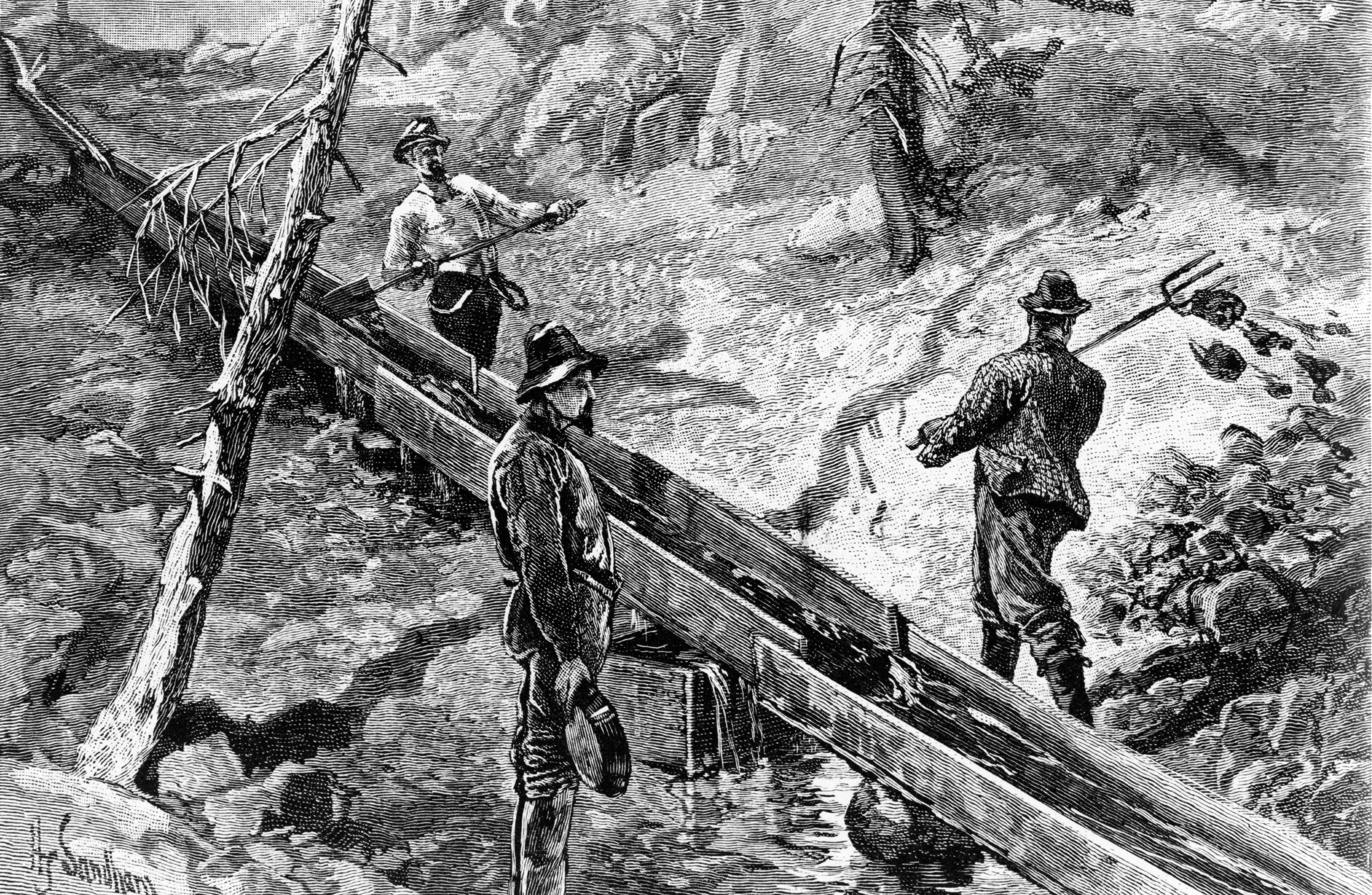 In his book, Season of the Witch, David Talbot describes the tumultuous rise of San Francisco in the 1800s: “A gold rush city of fortune seekers, gamblers, desperadoes and the flesh peddling circus that caters to such men.” Recent immigrants and others from around the United States settled the Pacific Coast by land and sea. A kind of unsanctioned, perverted manifest destiny took place, Native people displaced. This western land captured the American zeitgeist and came to represent lawlessness, harboring vice and greed.

Hernán Díaz returns to this pivotal historical period in his novel In the Distance, a finalist for the Pulitzer Prize. He shows an America in transition, fixated on the promise of prosperity, power, and property. It’s a bloody affair where the violent draw borders, quick to identify and exploit outsiders. Díaz’s story revolves around such an outsider named Håkan, a young Swede who, along with his brother, escapes vicious landowners for New York. They get separated in England—Håkan takes a ship around South America by mistake, all the way to California—and Håkan heads east in search of his brother, working against the grain of a caravan heading west for gold. Decades pass as he wanders. He finds no sign of his family. Friends and foes betray him in their pursuit of land and its luring riches.

In the tradition of William Faulkner, Gabriel García Márquez, and Toni Morrison, Díaz explores his characters’ connection to the land and how it claims them in return. While Håkan learns to respect the land and live off it, those he meets along his voyage seek to exploit it for personal gain. The latter exposes a devastating image of human nature driven by greed. For example, Håkan’s first friend, an Irish man named James Brennan, withers as his obsession with and failure in finding gold delves his family deeper into famine. James stares into his pan after submerging it in the river, “transfixed, as if he were looking into a mirror without recognizing the face that was supposed to be his.” When they go back into town, Håkan sees a depleted and muddy America, the land like clay, unwilling to be shaped by greedy men. It takes them instead:

their weather-beaten faces were bark and leather abstractions. Still, the onlookers retained faint traces of civilization that life in the wilderness had completely erased from the newcomers’ countenance.

Even Lorimer, Håkan’s naturalist friend who teaches him how to care for the land, seeks fame in his never-ending quest for the answers to humanity in nature. He risks his men’s lives by nearly starving them and dies dehydrated, his body bloated and beaten by the arid terrain. The land emerges as a caustic metaphor of the American Dream. One after another, men try exploiting the land, wanting to reap wealth without sowing fruits. And so it punishes, men’s bodies decomposing before death, called back to the dust from where they came.

These sickly and dying bodies in the caravan form an ever-evolving organism that, in Díaz’s hands, symbolizes a social cancer, seeking to spread its disease of violence. Its members establish small camps that churn out factions known for raping women and killing men over land deeds, commercial power over property their ultimate goal. Håkan stays on the periphery of this social phenomenon, never a part of the caravan yet never fully apart from it. When he travels alone in the desert, he suffers from loneliness. When he returns for food or community, the caravan rejects him as other. They try killing him then attempt to force him to kill others (he only does so in self defense). This evil smells of decay; it warns Håkan when he nears camp: “Rancid meats, feces, sour milk, sweat, porridge, vinegar, rotten teeth, bacon, disease, wax, mold, blood, broth.” Such human sickness protects itself from any possible cure—especially in the guise of outsiders like Håkan who carry a moral code of peace and equality. In the Distance, then, develops America’s heritage of exclusion, which enacts geographic borders to protect the established majority’s wealth.

Håkan seems uninterested in these man-made borders, crossing them and roaming the land free, which makes him strange and dangerous to others. As Håkan ages, Díaz develops him into a beastlike figure. As a child, after leaving the Brennan family near San Francisco, an unnamed woman locks Håkan in a room for her own pleasure: “she dressed, undressed, and dressed him again . . . He spent his days staring out at the desert, hoping [his brother] would feel his gaze through the osseous void.” Later, as an adult, people begin trapping and hunting him like game, exasperated by his wearing a lion’s mane as a protective garment. He’s a wild beast to be caged and gazed at, foreign and different. This constant persecution comes to represent the immigrant experience. We’re reminded of Central American child immigrants processed and forced into cells along the Texas border over the past year, or of the thousands of immigrant families quarantined in Ellis Island and Angel Island over the last two centuries. They, too, were placed in cells after entering the United States.

While violent characters aren’t able to keep Håkan for long, they capture his myth. From escaping locked rooms to being chased across the desert, people tell stories of him as a fearless beast who allegedly leaves bodies in his wake, despite his defense of women and children and of himself. As the years pass, he witnesses his own life reenacted on the streets of California:

Håkan saw a gigantic man wearing a lion skin [like his], his head invisible under the beasts head, holding a gun and a bloody knife. . . . a sheriff and two deputies come in. Shots are fired. No one is hit. Somehow, the sheriff and his men prevail. The giant in the lion skin is captured and dragged out into the darkness.

Two men from the acting troupe then collect contributions for their performance. They’ve fed the audience’s appetite for killing the other, portrayed as beast, and fill their own purses, but not Håkan’s. He’s now the villain in his own story, not those who killed his friends or tried killing him. Moreover, in this street play, the authorities kill the immigrant, legitimizing violence through a fictional representation of legal precedence. It’s the master narrative Toni Morrison has warned us about, a fiction that infects reality. It influences the majority and subjugates the minority. Håkan could be replaced with a Mexican rapist in today’s headlines, a greedy Jew in the funny papers at the turn of the twentieth century, or political cartoons of Uncle Sam kicking the Chinese out to promote the Page and Chinese Exclusion Acts at the turn of the nineteenth century.

Díaz achieves something subtle yet tremendous through In the Distance. He looks back at yesterday to find a hyperbolic image of America’s immigration story today. The current narrative protects borders from the inside, much like the caravans moving west and land deeds over a century ago. The recent death of seven-year-old Guatemalan, Jakelin Caal Maquin stands out among the daily surplus of immigrant stories. These are repurposed and prepared for the white majority. The US Customs and Border Patrol, for example, responded to Jakelin’s death by saying: “There is no indication that it was a lack of attention that resulted in this.” Politicians and pundits then suggested that migrants shouldn’t have made the trip in the first place. It’s a passive-aggressive attempt to place the blame in the immigrant’s hands—they crossed a line and must pay the consequences, their human value notwithstanding.

Tags:Hernán Díaz, In the Distance