Spring is in the air, and good books are in our hearts! Read on for our picks for this spring’s best literary offerings. 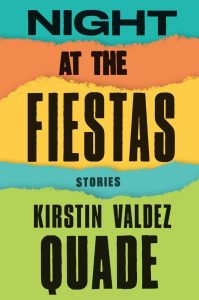 Kirstin Valdez Quade is one of the National Book Foundation’s 5-Under-35 honorees, and her debut story collection proves that she’s a writer of remarkable depth and precision. With stop-offs in Utah and California, much of the collection is set in Quade’s homeland of New Mexico. Beneath her pen, an almost impenetrable landscape reveals a violent history that still beats with a tender heart.

Each of the ten stories offers a lyrical aria of its own, but together they create the music of generations, of families, and of a people. In “Nemecia,” a young girl hopes to step out from behind her cousin’s shadow by leading the Corpus Christi parade. “Mojave Rats” demonstrates how a day spent in a frigid trailer between mother and daughter can turn into a prescient portrait of their shared inheritance. A man’s ambition to carry the cross and bear the pain of Jesus during Passion week in “The Five Wounds” becomes complicated when his pregnant daughter appears at his doorstep. There are boa constrictors, faux family reunions, blueberry fields, and enough hard-earned resilience to withstand a tough winter, the long absence of a loved one, and the struggle of caring for a new life while growing old.

This is a collection to be celebrated not just for its fine storytelling and subtle sentiment, but for its cultural exploration of those who inhabit the hardened and tortuous lands of the mythic Southwest. 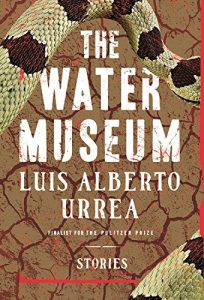 Pulitzer Prize finalist Luis Alberto Urrea specializes in readable magic, and his new short story collection is a literary road trip through Iowa, South Dakota, San Diego, Arizona, Massachusetts, and beyond with a soundtrack that includes The Who, Muddy Waters, Nine Inch Nails, and Jethro Tull.

Urrea’s work echoes a history of people and stories disappeared and returned, and The Water Museum features a cast of recurring rowdy characters forced into moments of sobriety. In “The Southside Raza Image Federation Corps of Discovery,” two friends set out in a canoe on a Lewis-and-Clark-like expedition only to find themselves in the crosshairs of border control. “The National City Reparation Society” depicts the divided allegiances of a man returned home to help an old friend loot abandoned houses. A cross-country trip finally turns cathartic when a car breaks down in the middle of nowhere in “Taped to the Sky.” Young love is tested, paint brushes are wielded, and in “Bid Farewell to Her Many Horses,” two enemies start to look something like companions in the wake of grief.

Pitch-perfect and penetrating, The Water Museum traverses the rich borderlands of the human heart with humor, mystery, and grit. 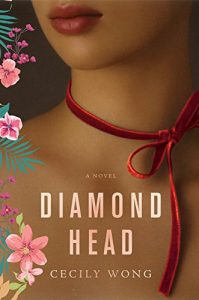 This lyrical novel held my heart captive from its opening scent of hibiscus to its final image of the dark and mighty volcano that bears witness to the rise and fall of one of Hawaii’s most prominent families. For three generations, the Leongs found true love and lost it at the hands of war, unrest, and deception from the time of the Boxer Rebellion to Pearl Harbor and World War II. Narrated by the women who hold these memories in their hearts, these are the stories that have both built and broken the Leong dynasty, a family knitted together by the red string of fate that ties one heart to its sole intended mate.

Trespasses in the ways of love cause knots in the red string that run generations deep, and Wong’s novel unravels them one by one. Entrepreneur Frank Leong is a devoted family man whose heart can’t help but conceal its past. His eldest son Bohai is dedicated, often overlooked, and yet the foundation upon which the family stands. Amy is a poor young woman desperate to escape from her life until she finds herself making an impossible choice. And when Theresa, eighteen and pregnant, is left holding the knotted strings of her ancestors, she must find a way to protect her own restless heart.

At its core, Diamond Head is a literary heartbreaker of a novel about the ways the heart betrays us, the ways it leads us to the truth. 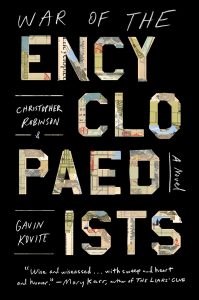 The War of the Encyclopaedists
Christopher Robinson and Gavin Kovite
Scribner, May 19
$26
Buy: book ∣ebook

This original and inventive collaboration between a poet and a soldier begins at a blow-out party before best friends Hal Corderoy and Mickey Montauk plan to head to Boston for grad school. The Encyclopaedists, as they call themselves, are lovers of banter, wit, and all things cultured and pop-cultured from Borges to Star Wars. But when Hal abandons his girlfriend Mani and Mickey gets called up for duty in Baghdad, the intellectual whimsy and boyish spontaneity that previously defined their friendship quickly dissipates. It’s 2004, and each half of the pair sets out for what he thinks may be the making of him, Mickey to fight in an increasingly ambiguous war and Corderoy to maneuver the rigid tunnels of literary academia.

Not much for sentimentalities, the friends keep in touch by editing their own Wikipedia page entitled “The Encyclopaedists.” As both young men dig into their lives and into the consequences of their own actions and the actions of others, what started as a shared forum for ideological verve transforms into an eloquent missive on humanity’s crooked architecture: betrayal sprouting from seeds of kindness, estrangement born from mutual mistakes, and attachments that defy distance, desertion, and reason. The masks worn by The Encyclopaedists are equally as important as what they conceal in this debut masterpiece that explores the evanescent link between what makes us each, by turn, a hero and a villain.