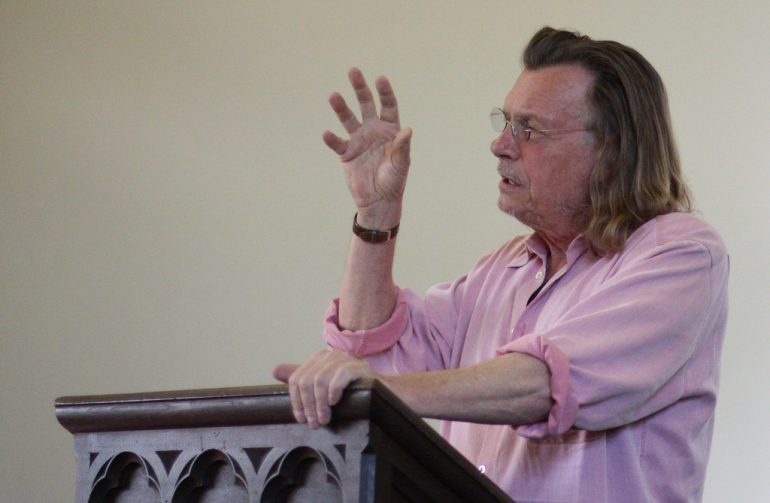 Thomas Lux was the first living poet I ever met. I had read a few of his poems—including one from a Best American Poetry volume that I treasured—but even the voice there (wry, direct, effusive) didn’t prepare me for the man himself as he read. He looked like a cross between a rock star and an engineer with his long blonde hair and professorial glasses. His voice could have carried across a football field. I asked him to sign a book, shyly, and slunk away. I had no idea then that I would eventually be accepted to an MFA program where Lux taught, and I would have the luck to hear him read many more times.

When Lux died on February 5th, at the age of seventy, I thought a lot about what made his poems so resonant, what made them stick in the mind beyond just the personality delivering them so memorably. Although there are numerous craft elements I could point to  (this New York Times obituary does an admirable job pinpointing what makes Lux’s poems stand out), it seems to me that their central quality is so often a large-heartedness that is difficult to describe, but unmistakable to encounter.

Take the poem “Toward” as an example. It is a marvel of craft: a seemingly straightforward love poem centered around different modes of transportation that could be used to carry the speaker to his lover, it is organized by complex repetition. The phrase “towards you” is used ten times in thirty-three lines. Each time, the urgency of the poem’s movement is increased. The poem’s own movement towards its resolution becomes the reader’s obsession the way the lover is the speaker’s. Lux capitalizes on this sense of urgency beautifully by concentrating the anaphora near the end of the poem. The first half of the poem contains only three of the ten repetitions; the last half contains seven, often coming very close to each other, as in “Towards you more oxygen / each breath, towards you” (21-22) or, four lines from the end, “run two towards you, towards you” (30).

In the case of the soundplay, too, the sheer exuberance of language dovetails with the unabashedly joyful declaration of love. In the opening sequence, where Lux describes a series of straightforward vehicles, he first begins to run the words together to increase movement, and then slips into alliteration: “on wheels—car, bus, cycle, truck, scooter, (roller) / skates, trolley, tram, tumbrel. / Towards you” (2-4). Although the middle of the poem contains more fantastic soundplay (“by a big rubberband, jumbo / airbus, on Dumbo’s / neck, one-seater copter” [11-13]), it’s the dialing down at the poem’s conclusion that catches me as a reader. Although the speaker never actually reaches his lover, he not only indicates that he is “on a sure course,” but uses a final list to describe the ultimate rest he will imminently achieve in union, with “harbor, origin, heart.” The music here is a complete turnaround from the irrepressibly nimble sounds prior to the resolution, and it slows the movement almost to a halt, suggesting an arrival. The five words in the final line—“towards you: harbor, origin, heart”—are linked by the repetition of the satisfying “r” sound, and by the mirroring words “harbor” and “heart.” I am as sensitive to sentimentality in poetry as any MFA grad worth their salt—which is exactly why it’s so moving to see it risked, vulnerably, and earned.

Lux turned his generous eye outward in poems, too. A piece like “I Love You Sweatheart” (always a showstopper at readings) takes a piece of misspelled highway graffiti and uses it to embody the highest impulses of love:

A man risked his life to write the words.
Love is like this at the bone, we hope, love
is like this, Sweetheart, all sore and dumb
and dangerous, ignited, blessed – always,
regardless, no exceptions,
always in blazing matters like these: blessed. (16-21)

And in “Triptych, Middle Panel Burning,” a poem about his childhood on a rural dairy farm, Lux opens with the image of his uncle grabbing his hand as a young boy and with the other hand touching an electric fence. The speaker, looking back, defends his uncle—even thanks him: “He / took the voltage first and besides / it only slaps and never burns” (5-7). A few lines later: “Thank you, Uncle. / You made sure I’d never murder—not / after they fried the guys who deserved it / in the movies” (17-20).

Lux was especially beloved to the Ploughshares community, as an alumnus of Emerson, then as faculty, and as a frequent guest editor. He was apparently as generous in these roles as his work would suggest. And 2017 seems a time when large-heartedness is needed more than ever. I don’t know if such a thing can be learned, but surely reading Lux’s poems would be one way to begin.