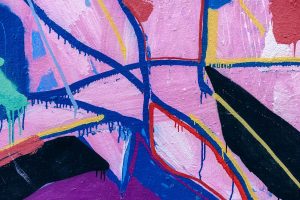 Chapbooks that combine the work of a writer with that of a visual artist are rarer than, perhaps, they should be. Though most presses work hard to match a cover’s imagery and design with a writer’s work, there’s something special about flipping open a chapbook to find art within its pages as well.

Small presses that are interested in the intersection of different artistic disciplines have found a way to mesh the visual and the written art in offering access to chapbooks online, reaching new audiences, and addressing challenges posed by the constant digital revolution. Three chapbooks, from daughter of the yam press, 7×7, and pizza pi press, stand out, combining beautiful language with vibrant images.

Reporting from the Belly of the Night by Sojourner Ahebee, visual art by Kamakshi Duvvuru  (daughter of the yam press, 2017)

In Sojourner Ahebee’s Reporting from the Belly of the Night, “desire is always / an American thing,” and figures from American history haunt its pages—Sojourner Truth and Walt Whitman feature in the very first poem, “Song of Myself.” The allusions throughout the book range from these nineteenth-century figures to mentions of contemporary icons, like Viola Davis, Azealia Banks, and Beyoncé. The idea of self, as posed by Ahebee via her reference to these women, is complex. It comes to her in moments of intimacy: sensuality is a way for the women in these poems to lose themselves within themselves, despite the harshness the world forces them to engage with, internalize, and move beyond—but not forget.

Womanhood is attached to girlhood in this chapbook. Speakers are often young, sometimes naïve, often full of pent-up desires. In the titular poem, the speaker, thinking of her younger self, celebrates beauty that emanates kindness “so black diamonds and pearls on the shine / so black your tongue after liquorice / so black i am purple of an azalea bush” (lines 18-20) and the memory of feeling that “some days, i planned to look destruction black” (line 50). These lines, recall lyrics by Azealia Banks.

Kamakshi Duvvuru’s dreamy watercolors enrich the chapbook, their hues pairing well with the moods of each poem. Many of them are abstract and add extra layers to the poetry. Others are soft depictions of women, brush-stroked onto the page and lacking fine detail, so that a reader may understand that the woman’s complexities are within her body, not visible on her surface—an idea that matches the complexities of the chapbook’s women and girl speakers.

Something Like a Labyrinth by Colette Arrand, visual art by Preston Spurlock (7×7, 2016)

The 7×7 site is dedicated to works like Collette Arrand and Preston Spurlock’s Something Like a Labyrinth, where writers and visual artists collaborate on works built directly into the website. When a reader clicks through the site, images and text appear, simulating the experience of a labyrinth—apt for Arrand’s text, which follows the narrative of a girl trapped for over 30 years in a maze.

Spurlock’s first visual is an illustration that feels very M.C. Escher-meets-early 1990s alternative album art, featuring staircases coming out of veined eyes and neon colors. The visuals illustrate the story, often utilizing various forms of media to give the story a campy and gruesome mood.

Arrand’s opening text situates her tale as a retelling of the King Minos myth, and introduces us to a dystopia where girls are removed to labyrinths. The rest of the chapbook reads like a survival guide for maneuvering the feeling of being lost. Though a reader hopes any train of thought will lead the girl from the labyrinth, it’s the embrace of hopelessness, the becoming of Other, rather than the regaining of the pre-Labyrinth self, that is truly what empowers her, and makes this chapbook extremely compelling.

one day i will be louder than all the bruises on your knees, Elaine Hsiang, illustrations by Tiffany Mallery (pizza pi press, 2015)

Elaine Hsiang’s, one day i will be louder than all the bruises on your knees, is a chapbook of poems paired with black and white illustrations, by Tiffany Mallery, each of which takes a moment, image, or metaphor from the poem and brings it to life. Hsiang’s poems are surrealist visions of what it’s like to be a twenty-something in and out of messy relationships.

The first few poems rely on food and kitchen imagery, so the drawings include, for example, a group of people who look like they’ve been mummified within ginger root and a woman eye-to-eye with a burger. When the speaker exits the home, the imagery goes from the familiar—kitchen tiles and faucets—to the uncanny. Many of the poems set outside of the home read more like dreams whether the speaker is “melting into each taxi cab,” as in “american is a hyphen,” or “tak[ing] the extra cable cars and latch[ing] them” to her back pocket, as in “doctor says no derailment.” Home offers a level of comfort that the outside world cannot, and the speaker slips further into the surreal when she leaves it.

The speaker reverts to a certain level of reality more clearly when there is someone else to experience it with her. In “heirloom,” she finds comfort in the vanishing distance between her and a lover, even as “he slips sorry in and out of me until I am a thanking machine and all the broken turkey legs i have hidden.” Hsiang succeeds in mapping the interiority of a self-aware, young woman whose certainties about herself are equal to her very honest uncertainties, all with bizarre metaphors and surreal illustrations that are grounded in a strange view of the familiar, keeping a reader’s attention through the end.

Tags:Colette Arrand, Elaine Hsiang, Kamashi Duvvuru, one day i will be louder than all the bruises on your knees, Preston Spurlock, Reporting from the Belly of the Night, Sojourner Ahebee, Something Like a Labyrinth, Tiffany Mallery