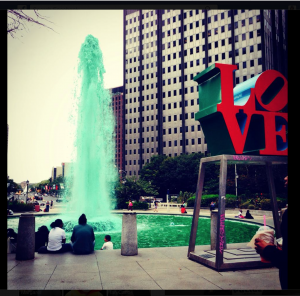 Philadelphia is home to a variety of presses, literary journals, and reading series, as well as the poetry and book arts festival Philalalia. These stellar institutions are supported by a strong cabal of Philly-based writers. Three of Philly’s poets, Pattie McCarthy, Alina Pleskova, and Rachel Milligan, have published chapbooks on a medieval visionary, conceptions of desire and identity, and the sometimes-creepy underbelly of reality.

eth Press publishes post-medieval chapbooks—those “inspired by, adapted from, or otherwise inhabited by medieval texts,” according to their website, and margerykempething by Pattie McCarthy, a lover of this sort of history and previous contributor to this press, fits the bill. This chapbook was inspired by a fourteenth-century-born English Christian Mystic, Margery Kempe. Known for being the woman who wrote the first ever autobiography, Kempe figures as inspiration for McCarthy’s speaker, who writes to her, about her, and through her.

Each poem within is around the length of a sonnet and portrays Kempe as both a mother and a woman. In this vein, the speaker focuses on Kempe’s attention to her body. A poem about parturition reads: “her body / betrays her in a new way or an old / way that’s new to her”; another quotes Kempe discussing herself: “take me in / the armys & kyssen my mowth.” McCarthy showcases the relationship between Kempe, her speaker, and embodiment; she also connects this to how people today relatedly feel about their bodies.

The chapbook’s poems have a deep connection to the present. In a book so attached to an earlier time, anachronistic insertions of the speaker’s own life do not intrude but rather blend into the overall relationship that the speaker has with Kempe. Reading this chapbook is like reading Kempe through someone else’s knowing eyes. There are lessons for the reader but then lessons to Kempe as well, as though she were also learning about our day in age through our reading, just as we read her to learn about hers.

What Urge Will Save Us by Alina Pleskova (Spooky Girlfriend Press, April 2017)

In What Urge Will Save Us by Alina Pleskova, distance and desire both play a role in self-reflection and self-definition. The speaker is consistently musing: who am I based on what I want, where I am, how I see myself, and what I see myself rejecting. The first poem, “Q Train Poem,” showcases these themes, as well as the ethics of sexuality, the impact of climate change, and how advice from one’s parents both helps and bites.

The poems feel like one side of a smart conversation with the speaker, who, in working through “figuring it all out,” realizes that maybe part of life is knowing that some things will never be understood. Pleskova’s use of astrology and other spiritual guides in leading the speaker through the messiness of life. The speaker still knows, however, that despite these guides, it’s important to know it’s not possible to know everything. Pleskova uses the power of negation to signal this, as in “Magpie,” when she writes, “It’s never enough / but at luckiest, // the white light holds / for an instant.”

Pleskova’s poems all are packed with these larger-than-confessional collisions of self-deprecation with relatable contemplation of the present. In “Saturn Return, her speaker is in one moment revealing how she keeps spiritually clean and the next” discussing how “our economic system / is structurally rigged.” Her voice and tone shift easily from the conversational to eloquent that the conversational itself finds its own eloquence.

There is a muted sense of the horror in Queen Carrion by Rachel Milligan: the idea that behind the masks of things that at first appear normal there is something lurking. For Milligan, behind the mundane, such as a meal made for a lover or turning down the radio to hear the story someone is telling, there is something horrible. Bats that fly into furnaces alone are odd, but telling that anecdote at the same time as someone else as in “Are You Foaming At the Mouth?” is what gives Milligan’s chapbook the sense of the uncanny.

The chapbook’s opening two poems are like spells. In “Is the Silhouette You Traced of My Body Still on Your Dining Room Table?”, the speaker says, “He makes me / cloudy like broth”; in “Is There a Way To Sleep This Season Off?”, the poem ends “He did not mar / me with rain.” These quiet moments are calculated to test the boundaries of the world Queen Carrion builds, which is a reality with its own set of rules, even if it might look at first much like the reality we live in.

There are also moments where darkness does not lurk beneath normalcy but bares its fangs openly, such as in the poem “Well, What Are You Running From?” In this poem, Milligan writes, “A woman is not a series of rooms. I am not a thousand tongues. I am only one giant one,” lines that are meant to figuratively unpack what the speaker both and isn’t, with the reality of what she is being something grotesque but also subversive. A woman’s plurality is often taken for granted; Milligan’s speaker is sure she is one, and as one, more prominent than many.