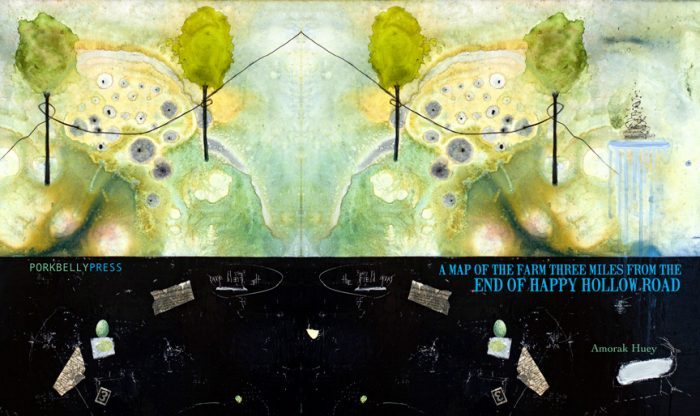 Porkbelly Press is a Cincinnati-based press that puts out chapbooks and micro-chapbooks as well as a literary magazines and anthologies. It describes itself as an “indie queer-friendly, feminist press” and produces chapbooks that are hand-stitched. Porkbelly is as diverse as its description claims, boasting titles like Eloisa Amezcua’s Mexicamericana, Billie R. Tadros’ inter: burial places, and Wren Hanks’ Ghost Skin, in addition to those reviewed below, which exemplify the high-quality writing the press values.

This chapbook centers on place and memory, with each title naming a geographic feature or structure followed by a prepositional phrase further defining but more often placing it in the landscape that creates the map that is the title of Amorak Huey’s A Map of the Farm Three Miles from the End of Happy Hollow Road. Most of the poems are concise, with one even being as short as one line, and the longest only thirteen lines. The metaphors Huey creates in giving life to the landscape combine the abstract with nature, such as in the opening poem “The Pond in the Corner of the Yard,” where “memory’s post-dawn sky already fevered with desire” or in “The River Beyond the Pasture,” where “time is water where it’s too shallow to swim / creek-stones slippery beneath my uncertain feet.”

Huey is doing more than engaging with his speaker’s childhood memories in this chapbook, though, in addressing the human impact on the places they grow to know like family. The speaker understands how nature pleases and nourishes the human body and soul, yet acknowledges that this need combined with a lack of understanding regarding how to reciprocate that nourishment has a negative effect on the environment’s continued ability to provide these things to humanity. This is most apparent in a poem titled “The Kudzu, Everywhere,” where the kudzu as “an invasive species, colonists, trespassers” is a metaphor for humanity’s far reach into nature but lack of understanding of its fragility and depth. Ultimately, as with non-native plants, “eventually the world forgets / what it looked like without us.” This comparison of colonialism with the destruction of the environment is a strong and lasting image, as is the final image of the book: a truck of lumber that Huey refers to in “The Barn at the End of the Path” as “the barn this will become / the barn it already used to be,” reaffirming in so few lines the controlling themes of the book of place, memory, and environmentalism.

This chapbook is a combination of both narrative and lyric in that it tells a story within its pages but still directly connects to the heart of its speaker. The form of hiku [pull]’s first poem plays with the Japanese haibun, a combination of prose and haiku, with prose often fronting a poem, and compounded words or phrases following it. An example is in the first poem, which holds a key to the rest of the poem. While the people depicted are only referred to as “he” and “she,” readers can piece together these as the speaker’s mother and father. The poem is in two prose stanzas that lack punctuation and end with a third stanza that finishes the second’s sentence in compounded words describing a body at the bottom of a cliff: “neckback armswarming.” In the second poem, a widow uses outmoded technology to communicate with her husband who committed suicide, and in the third, a connection is made to the speaker.

Piece by piece, the grief suffered by the speaker and his family unfolds as he grows up. This is a chapbook centered on family but also one centered on identity, on learning about one’s self through the eyes of your family and having to understand that as a part of how you understand yourself. Sibling differences also are featured prominently, as in “Onii-san [‘Older Brother’]:

This chapbook is memorable, but more impressively fits a lot into one small beautiful book. The imagery is vivid, the themes make a reader both think and feel for the speaker, and the chosen form of mostly prose poetry paces the book well.

Haunting the Last House on Holland Island, Fallen into the Bay by Sarah Ann Winn

While the first two Porkbelly chapbooks discussed here are from their 2016 chapbook series, Sarah Ann Winn’s Haunting the Last House on Holland Island, Fallen into the Bay is a micro-chapbook, a fact distinguished only by its shorter length. However, similar to White’s book, Winn’s poetry packs a lot of punch for the small amount of space it takes up on the shelf. The collection engages with an ecopoetic tradition above all its other themes, though also explores parallels and contrasts of land and ocean, memory, fantasy, the haunted, and the passing of time.

Its opening epigraph is from a newspaper report about an actual island on the Chesapeake Bay that vanished, noting the final house’s descent into the ocean. The chapbook proceeds with a cento (and also ends with one) that takes such a wide variety for its source texts and explores what composes an end. The following poems are playful but simultaneously serious, addressing issues of climate change by weaving myth with legend. The speaker is a ghost whose concerns are so often earthly despite the fact her home is underwater. The marriage of the earthly with the oceanic makes for lines beautiful in sound and image, such as in“Housewarming the Last House on Holland Island, Fallen into the Bay,” which reads  “a bivalve falls in love with / an old butterfly hair clip,” or  in“Holland Island Home Tour,” reading “our street regulates snap shot clamshell / gardens, they monitor the change time brings / note newly shifting ephemerals into our yard.”

For a micro-chapbook, Winn packs an impressive amount of content into these poems.