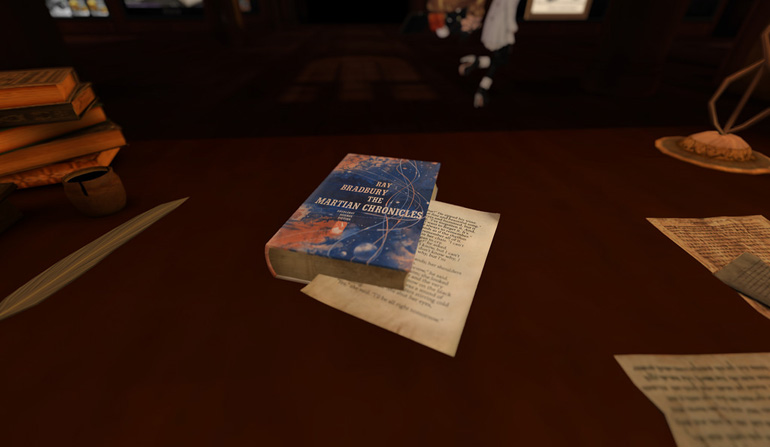 Throwback Thursday is a series that highlights classic texts commonly assigned to students that deserve to be revisited and reconsidered in adulthood. This month’s selection is The Martian Chronicles by Ray Bradbury.

The United States adds another year of distance from the revolution which emancipated Americans from the British with every 4th of July that passes, and the scars of colonization grow ever more faded. But the world we live in isn’t free from the tyranny of self-imposed ownership; in fact, the stability of nations and the common goal of forward-looking progress appear to be increasingly more tenuous as we press on into the 21st century. It’s within this context that a book like Ray Bradbury’s The Martian Chronicles packs a tremendous punch.

A collection of intricately linked yet inherently stand-alone stories, the central plotline of The Martian Chronicles follows the semi-allegorical colonization of Mars by the Americans, and documents the removal of the planet from the aboriginal Martians and subsequent attempts by the Americans to create a second version of their beloved home. The stories can be broken into three loosely correlated groups: attempts to reach Mars, the success of which results in a complete annihilation of the Martian race, attempts to colonize Mars and make it into a second America after the Earth is cut off by a nuclear war, and attempts to reconcile the idea that the intrepid individuals who made the trip to Mars are no longer Americans and instead have become Martians.

As it echoes the well-documented ups and downs of the American frontier, it’s not surprising that the novel is chosen for many high school reading lists as it wraps together the takeaways of the three-way struggle between the Native Americans, the American settlers, and the British colonists while also emphasizing the value of empathy and understanding, all wrapped up with a tidy science fictional bow.

On a personal level, The Martian Chronicles was required reading in my 7th grade American literature class. But it was one of the books that had the most profound effect on my sensibilities both as a reader and as a person in the modern world that we know nearly twenty years later. That’s why I’ve chosen to kick off this series by recommending a second look at the collection—despite being published during the height of the Cold War in 1950, and being shot through with the terror that struck much of the world at that time, equally present in the text is a second underlying message that unifies the collection: aspiring to cultural homogeneity is morally and ethically wrong, and will only end in destruction—a sentiment which is increasingly prescient in the current geopolitical climate.

To elaborate further: Britain is looked at as the country who had the heaviest hand in the earliest colonization of our world, and after the UK’s historic vote to leave the European Union last month, it became quite apparent that the ideals we’ve taken for granted as a modern, advanced society are no longer the force that they once were. It also means that Britain’s unification with other countries and the resulting shift from owner to member of a union doesn’t carry the weight it once did—they’re once again seeking to be the dominant power as opposed to a cooperating nation. And when placed side-by-side with the spread of ISIS not just in the Middle East but across the globe, it’s hard to avoid the perils of misplaced power and social injustice, and the stasis we’ve enjoyed as a developed world is no longer guaranteed.

Seeking a world (be it the future version of Mars, or the global delineation we now know) in which all people share the same values and sensibilities is a terrifying prospect. One of the things that stuck with me the most after reading this book not just the first time but every time I read it, is the heartbreaking lack of consideration given to the individuals who existed before the clamor for power and sameness took over. And that’s what makes The Martian Chronicles so special: the stories in the collection highlight the death and destruction that emanates from an overwhelming discomfort with the unknown, and for once you see exactly what happens when that desire to make everything the same actually comes to fruition—but it’s done in such a way that it doesn’t come across as preachy, instead it serves as a cautionary tale against placing the cultures of others on the same level as your own.

Putting aside the implications on a global scale, it’s important to note that the book is filled with beautiful, unique prose that sticks with you in an eerie way—the Martians, as portrayed by Ray Bradbury at the beginning of the book and prior to their extinction, have the ability to control your mind and what you see. And somehow that’s exactly what he does with the book; the same notes are hit across all the tales in the collection, and you find yourself lulled into another dimension, feeling the pain and fear of the characters on a psychic level.

If all this makes The Martian Chronicles sound like a very serious and strife-filled collection, that’s because it is. But it’s also a celebration of the things that make us unique, and a reminder of the importance of embracing the cultures you’re surrounded with, and not trying to make them into replicas of your own. Reading it in 2016, nearly 70 years after the book was first published, is a reminder that while we may seem to be a nation and frankly a world that’s moved on from the transgressions of the past, history does, in fact, repeat itself. And we’re the only individuals who can prevent that from happening.