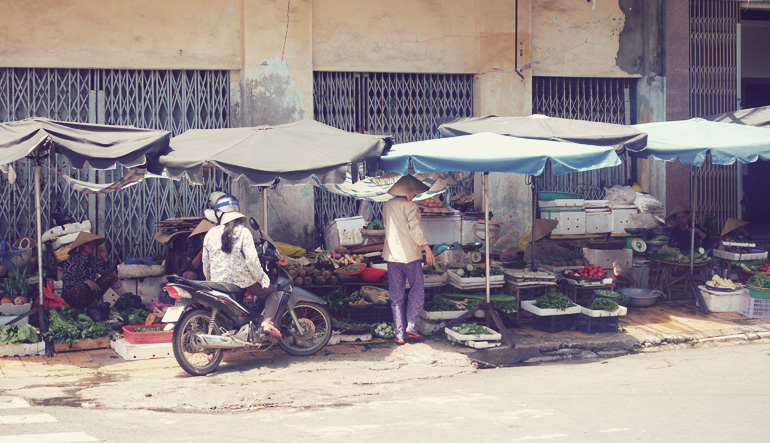 Throwback Thursday is a series that highlights classic texts commonly assigned to students that deserve to be revisited and reconsidered in adulthood. This month’s selection is The Quiet American by Graham Greene.

In 1956, the United States was in crisis. The Vietnam War had begun overseas, and anti-communist sentiment peaked with McCarthyism on the hill. For the first time, Americans were beginning to question the viability of being ‘the greatest nation in the world.’ It’s no surprise, then, that when the New York Times reviewed The Quiet American that year, Robert Gorham Davis described the central thesis of the book as “quite simply that America is a crassly materialistic and ‘innocent’ nation with no understanding of other peoples.” What is surprising, though, is that nearly sixty years later that thesis feels like it could’ve been written today.

At its heart, The Quiet American is the story of a struggle between extreme cynicism and idealism—the juxtaposition of intentions and actions, the disconnect between the native and the foreigner. Set against the backdrop of the war in Vietnam, the novel has three central characters: a bitter British journalist named Fowler, an undercover American CIA agent named Pyle, and a twenty-year-old Vietnamese dancer named Phuong.

Pyle is naïve, hopeful, and quick to believe that the loosely-conceptualized policies that he has carried with him to Vietnam are capable of changing the lives of the suffering citizens of that country. Fowler consistently tries to challenge these beliefs—his nature being skeptical though based on a solid base of knowledge and experience—and is immensely frustrated by the idea that the young American is driven by abstract philosophy known as the ‘third force’ that has no chance of succeeding.

Across battlefields and behind closed doors, the two men attempt to understand one another and convince the other that they know the way forward in a situation that seems to have no solution—and it’s clear that neither one will ever budge from the position that they take. Instead, that’s the role that Phuong takes on: to create a love triangle of epic proportions, a triangle which threatens to destroy the things that both men hold dear.

While Phuong initially takes up with Fowler, who provides her with much-desired security and comfort, she realizes that she isn’t satisfied with playing the role of domestic partner to the older man—packing his pipe, entertaining him at odd hours, lounging around his home. She longs for the glamour and power of being the wife of an American, a role which her family would approve of and would up her status in life. When Phuong meets Pyle, it’s clear that Pyle and Fowler will not be able to co-exist, and that one man will succumb to the other. It’s only a matter of time.

Much of the criticism of the book, after publication, came on behalf of Americans who found that the battles that Fowler fights for his integrity are too easily won, his arguments never met by an equal level of intensity by his seemingly innocent foe. And Pyle, for his part, is searching for a sense of democracy that he doesn’t quite grasp. His foolish whims drive him to take actions that carry a high human cost, and it seems, to a certain degree, that the repercussions that these actions incur are believed to be a necessary evil.

At the climax of the story, Fowler attempts to save his lover from the man who’s trying to lure her away. But he justifies this to himself by saying that the American must be destroyed, not just for himself but because Pyle’s inexperience and naiveté will only cause casualties and not achieve the democratic end goals he believes he’s aiming for. The final twist of the plot is painful, laden with meaning, and a predictor of the real-life unwinnable battles that were to come in the Vietnam War, but it’s also the most perfect example of convincing one’s self that they are doing the right thing even if it’s the moral low ground.

Now, in 2016, we find ourselves in a similar predicament. Two individuals have put forth their vision for the future of the country we live in, and both sides find the other to be oppressive and overwhelming. The conflict between a woman with much experience and knowledge, and a man with instincts and ideals is being inflamed by their desire to win over the lover, which is represented by the highest office in the United States. It’s an allegory that is perhaps not instantly intuitive, but when reading the way that both Fowler and Pyle articulate their beliefs and make their cases for being right, it’s incredibly hard not to draw parallels between the conflict abroad and the conflict happening right here before us at this very time.

The Quiet American is an important novel; it’s a reflection on the cost of war and the toll it takes on the soul and morals of the average citizen, but it’s also an examination of the humanity that is lost in the crossfire between those that believe that they know the best way forward. It’s also a love story that centers on a subject whose bitter indifference seems not to warrant the level of devotion from the two leading men, but despite the indifference we see, the depth of character is drawn from the passion with which they approach a situation and attempt to win over the vote of confidence from a woman.

The tale is one that’s been told many times, but it’s worth revisiting this story to understand the driving forces behind our political beliefs and ideations, and the lengths that we’re willing to go in order to end up where we think we should be.