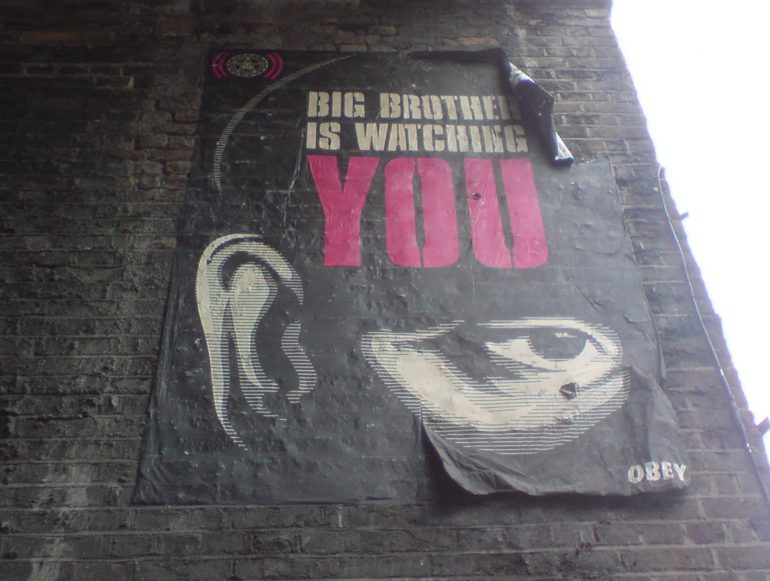 Throwback Thursday is a series that highlights classic texts commonly assigned to students that deserve to be revisited and reconsidered in adulthood. This month’s selection is 1984 by George Orwell.

Just two days after President Donald Trump took office, Counselor to the President Kellyanne Conway took a seat across from Chuck Todd on Meet the Press. The conversation that followed will be remembered for decades to come. Conway calmly stated that White House Press Secretary Sean Spicer hadn’t spoken falsehoods in a press conference the day before; he was merely stating “alternative facts.” For many, this phrase harkened back to the dystopian vision of society presented in George Orwell’s 1984.

“In the novel, the term ‘newspeak’ refers to language in which independent thought, or ‘unorthodox’ political ideas, have been eliminated. ‘Doublethink’ is defined as ‘reality control,”’ the New York Times reported when analyzing the Orwellian connection to “alternative facts” a few days later. It wasn’t just the Times who noticed the similarity. Less than a week into the new presidency, the list of top-selling books on Amazon was flooded with dystopian fiction and non-fictional accounts of fascist regimes—a sharp contrast to the list’s usual mass-market paperback staples. The American people had spoken in the way they know best: by spending their hard-earned money to try to make sense of the current state of the world.

First published in 1949, 1984 tells the story of Winston Smith, a thoughtful Londoner who works for the Records Department of the Ministry of Truth. His job is to rewrite history, to transform facts into new truths that match the perpetually changing message of the government. The work takes a toll on Winston, and he begins to crave a way to lash out at Big Brother, the totalitarian leader who watches his every move–literally, through screens that constantly monitor citizens’ activity. Winston lives in a near-future Britain that exists under a Stalinesque rule, where conformity is mandated and breaking rank is the highest form of treason.

Filled with a sense of hopelessness and despair, Winston turns to the most basic form of revolt: he begins a diary. It’s the act of writing that allows him to recognize potential allies, and that awareness brings him together with the love of his life, Julia, who helps awaken his inner passions and drives him to fight against the powers that be. Winston’s newfound ability to trust is how he ultimately gets caught: his writing has, in fact, been monitored from the beginning, despite his belief that he was discreet and undetected.  Winston trusts others with knowledge of his dissent and is shortly apprehended.

He’s taken to the Ministry of Love, a government facility where citizens are remolded to accept Big Brother’s ideology. Winston is subjected to a barrage of deprogramming exercises designed to convert his thoughts back to the “doublethink” of the masses. Losing Julia is the final factor in breaking him, and he is reverted to the emotionless, thoughtless state of existence that the government prefers for its citizens. When Winston is reintegrated into society and happens upon Julia in public, he doesn’t feel a thing.

I first read 1984 when I was in the 7th grade, and while I understood the basic lessons that the book imparted, I don’t think I quite understood the implications for the world at large. Nor did I think that the basic freedoms I believed to be eternal could ever be taken away. The idea that “Big Brother” was watching was a reality that I acknowledged, but I never thought that the passive “thoughtcrimes” imagined in the novel could become real-life criminal offenses, that the truths we considered everlasting could be erased and rewritten in the blink of an eye.

1984 seemed more relevant than ever when Edward Snowden first leaked the NSA’s spy programs and was forced into exile under threat of the harshest punishment. But in 2017, we’ve encountered even more reasons to revisit the novel’s rich text, in which aspects of humanity are compromised by popular belief in a truth that has been massaged, and society adheres to a common set of rules without possessing a definite set of facts. Now, more than ever, it’s important to understand the implications of conforming to a reality that we know isn’t real, and to accept that while it may not be easy, we must fight to maintain our beliefs and stand up for what is right.

It’s no surprise that 1984 is a best-seller, but it’s imperative that we never let a writer’s imagined future become our powerless present. We don’t have to follow that which we don’t believe, and we shouldn’t–even if Big Brother is watching.