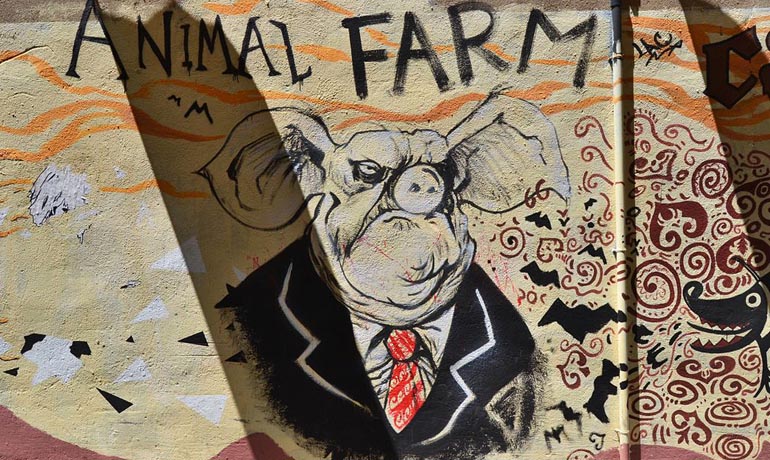 Throwback Thursday is a series that highlights classic texts commonly assigned to students that deserve to be revisited and reconsidered in adulthood. This month’s selection is Animal Farm by George Orwell.

In 1972, British librarian and scholar Ian Angus made the miraculous discovery of a previously unpublished manuscript of George Orwell’s preface to Animal Farm called “The Freedom of the Press.” Angus would go on to run the full text in the Times Literary Supplement of September that year, nearly three decades after the novella’s initial publication. But there’s something incredibly striking about the substance of this preface—even above and beyond the prescient nature of the story itself:

The servility with which the greater part of the English intelligentsia have swallowed and repeated Russian propaganda from 1941 onwards would be quite astounding if it were not that they have behaved similarly on several earlier occasions. On one controversial issue after another the Russian viewpoint has been accepted without examination and then publicised with complete disregard to historical truth or intellectual decency.

Here, Orwell presents a case composed in 1943, in the era of Stalin and a cruel Soviet Russia—but one that has enormous resonance in the modern era of fake news and misinformation, and brings a new lens with which we can (and should) approach his classic text in 2017.

Animal Farm is, at heart, a fable set around the concepts of tyranny and revolution. Mr. Jones treats the animals of Manor Farm in a way that is unacceptable to those who inhabit it, and his drunken cruelty only serves to underline the class difference between animals and humans. Old Major, the de facto leader of the animals, calls a meeting in which he describes a dream he has and presents them with a song that speaks of revolution and just treatment. The elder pig promptly dies a few days later, leaving the excited crowd to follow two young pigs—Snowball and Napoleon—toward the end goal of equality that they seek.

Commandments and laws are set out by the community, and the name of the farm is changed to reflect the progress that the coalition has made. It’s in this context that they are able to subvert a potential takeover from the vengeful Mr. Jones, and all seems to be moving forward. But just as with humans, the two pigs show their true colors once they are in a position of power. It does not matter that they do not have the same pedigree or disposition of their former leader, they still face the same temptations to suppress threats to their rule, and do so in vicious fashion. The two pigs turn on one another, and it becomes clear that they have not staged a revolution and that the resistance has been futile. The animals of the farm are not only just where they started out, but almost return to a diminished position as they’ve now lost their hope in equality, too.

The moral of the story is perhaps a bit dark, and the suggestion that there is no way to revolt and gain substantive change is perhaps one that has evolved in the nearly three-quarters of a century since the time that the novella was published. But there’s certainly something lasting in the importance of the integrity of the mission, and the belief of the one who takes up the position of power—and a warning about what can happen when the motives are not pure, but inherited.

Today’s politics reflect a similar mindset: what we’re doing isn’t working, and we must find a way to change our fates by changing our foundations and the way in which we approach the democratic process. But that doesn’t mean we should throw it all out—or follow those who claim to want to subvert the past without a clear path forward to the future. The leaders we seek should be contingent on their ability to provide us with this mission, and not just those who we believe will take us away from the path that we’re on right now. It’s that true passion that underlies a successful revolution—and what was lacking in the stooges who took up the mantle after the one who built the plan was lost.

To return back to the preface that never was: Orwell saw the threat of Russia to the democracy of the West, and the lack of power one had as an intellectual individual against a never-ending wave of baseless propaganda. The only way to move forward as a society is to deal with facts, to question the things that we’re told, and to examine every aspect of what we’re given for signs that things may not be indicative of a just and prosperous future. And only once we’ve gotten to that stage where we’re willing to interrogate falsity and injustice outright will we be able to proceed with the resistance—and the only way in which we won’t end up like the animals on Animal Farm.