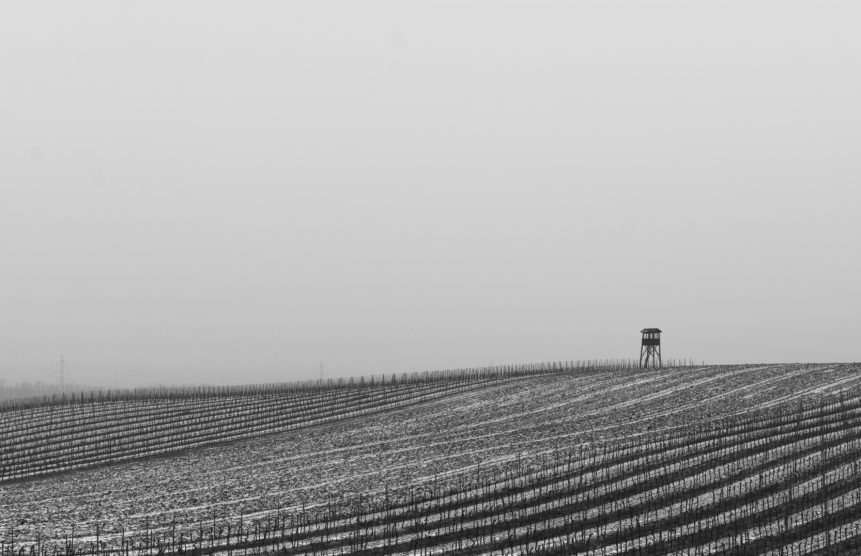 Time has been strange lately. The spatial bounds of my world are narrow—grocery store, neighborhood walk, cluttered desk—but time keeps passing, albeit with new distortions. Days feel at once brief and interminable; a week ends without my realizing. On a Friday that might as well have been a Monday, I revisited some poems by Czeslaw Milosz. His work explores the disorientation of time, the pain of dislocation, and the porous border between community and solitude. He writes with awe and bemusement about both small moments and large expanses of time. He evokes eternity in everyday encounters between people, and as a result, his poems feel at once lonely and communal, metaphysical and down-to-earth.

In his 1936 poem “Encounter,” Milosz captures, in four stanzas, a brief moment between travelers and a landscape. The poem begins with energy and immediacy: “We were riding through frozen fields in a wagon at dawn. / A red wing rose in the darkness. // And suddenly a hare ran across the road. / One of us pointed to it with his hand.” These lines are electric with the unexpected, the half-glimpsed: the red wing and the hare emerge from hazy surroundings. Much is a mystery. We don’t know who is in the wagon, where they’re going, how they’re related to one another, where they are in history. But the immediate moment is intensely familiar: an early morning journey, a creature darting in front of the wheels. We’re drawn in—we recognize, we feel less alone. In the poem’s last stanzas Milosz introduces time and distance, and the lines takes on a wistful tone:

That was long ago. Today neither of them is alive,
Not the hare, nor the man who made the gesture.

There’s a sudden expansion of time here: the poem isn’t just about the titular encounter, but about the passage of years. The speaker is full of wonder not about the individual man or hare—he knows they’re gone—but about the energy of the moment, its intensity. It seems impossible that those crackling, immediate things—the wing, the pointing hand—could disappear. At the poem’s close, there’s again a sense of the communal—we know these kinds of moments. There’s also a sense of loneliness—we’ve experienced nostalgia towards a seemingly insignificant moment that’s forever gone.

In “Late Ripeness,” moments expand and years contract in similar ways. This poem’s speaker is approaching his “ninetieth year.” The first stanzas of the poem are full of calm movement and a focus on the self: “One after another my former lives were departing, / like ships, together with their sorrow.” As the poem continues, the speaker relinquishes this focus on the self: “I was not separated from people, / grief and pity joined us.” This refusal of separateness, the speaker’s insistence on a community of those who suffer, expands into musings on deeper, more mystical connectedness: “For where we come from there is no division / into Yes and No, into is, was, and will be.” The speaker assumes not only an emotional network between people, but extrapolates to a connection with metaphysical or spiritual undertones. In this essential connectedness, time disappears. The past encroaches and looms, awaiting expression:

Moments from yesterday and from centuries ago—
a sword blow, the painting of eyelashes before a mirror
of polished metal, a lethal musket shot, a caravel
staving its hull against a reef—they dwell in us,
waiting for a fulfillment.

This stanza evokes a different register of poetry, of storytelling—it feels epic. But the moments it describes, even if they’re from centuries past, are tiny: a ship bobbing in waves, a woman applying makeup. They’re as fleeting as the hare in the road, the red wing in darkness. Milosz suggests again the timelessness of these small interactions. We’re connected in our minor gestures and interactions in the present; we’re also connected to those who’ve had similar encounters in centuries past. What links people in the present to those from “centuries ago” isn’t anything lofty and grandiose, but a shared experience of similarly fleeting moments. After this epic of the everyday, this survey of centuries, the poem’s final stanza descends again into a register of concrete images: “I knew, always, that I would be a worker in the vineyard, / as are all men and women living at the same time, / whether they are aware of it or not.” This final image is intensely communal: everyone living in the same moment in history is creating something together. The loneliness that lurks behind the image is that we don’t always realize this connectedness.

That obliviousness—a failure to realize that we’re connected—is central to the tragedy of Milosz’s “A Song on the End of the World.” Written in 1944, it’s a poem about the apocalypse. It begins with a sense of uneasy normalcy, a stanza with the cadence of a storybook rhyme:

On the day the world ends
A bee circles a clover,
A fisherman mends a glimmering net.
Happy porpoises jump in the sea,
By the rainspout young sparrows are playing
And the snake is gold-skinned as it should always be.

Everything is as it always was. People walk under umbrellas, boats are on the sea, vendors sell fruit. The populace is in denial: “And those who expected lightning and thunder / Are disappointed. / And those who expected signs and archangels’ trumps / Do not believe it is happening now.” The beauty of the world is simple, exaggerated, almost fabulistic: “As long as the bumblebee visits a rose, / As long as rosy infants are born / No one believes it is happening now.” There’s a naïveté to these happy images, a refusal to acknowledge the precariousness of the society, and even nature. The final stanza punctures the blissful picture:

The call of this non-prophet is to come to terms with the darkness that is the flipside of any happy village, to understand that the end of the world will look much like life in the world as it is. If timelessness and connection are rooted in small encounters, catastrophe also has its roots in the everyday. In “Late Ripeness”, Milosz suggests that connectedness through time depends on the fleeting, the mundane—in “A Song on the End of the World” he suggests that disaster and apocalypse are also products of our everyday interactions, rather than the result of any sort of cinematic, biblical rupture involving archangels. Either way, he suggests, we should look to everyday interactions for answers.

By turns hopeful and apocalyptic, these poems, with their focus on time, change, and community, remind us that we’re not alone—and that our togetherness is a necessity and a responsibility. It’s in moments of interaction that we can briefly glimpse something like eternity. Milosz’s poems suggest that moments of pain can be not only oppressive, but connective—and that ultimately, they’re fleeting. As Milosz writes in another poem, “Ars Poetica?”, “The purpose of poetry is to remind us / how difficult it is to remain just one person.” That’s what these poems do: sometimes they make us feel alone and sometimes they remind us of connectedness. They show us the value of both.

Tags:A Song on the End of the World, Czeslaw Milosz, Encounter, Late Ripeness