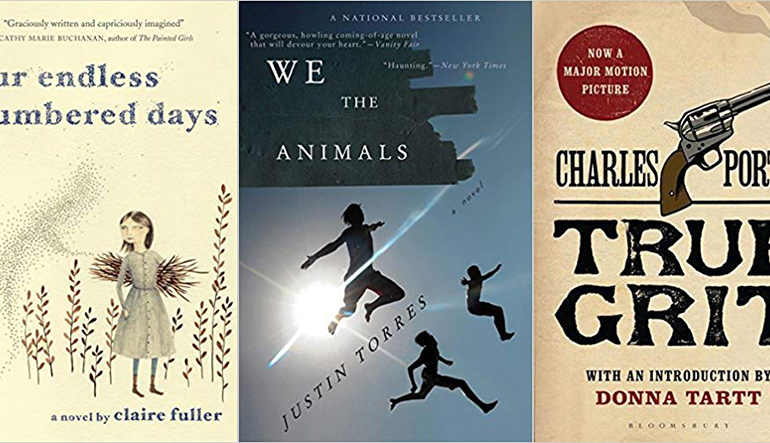 Most of my favorite narrators are children. Plenty of people would put this down to a fundamental immaturity, and those people are probably correct, but they’re missing something, too. Great child narrators feel like a Oulipo trick, pulled off seamlessly. Instead of writing without certain letters, writers of child narrators blind themselves to certain truths. A child doesn’t know everything they need to about the world, and so the writer’s task is essentially to write a great ignorance onto the page, making it sympathetic and interesting even for someone who doesn’t share it (or doesn’t think that they do). Three of my favorite books featuring child narrators are Claire Fuller’s Our Endless Numbered Days, Justin Torres’ We the Animals, and Charles Portis’ True Grit.

Our Endless Numbered Days revolves around a huge missing piece in its narrator’s understanding. Peggy Hillcoat, whose age spans from eight to seventeen over the course of the book, begins her narration thusly: “This Morning I found a black-and-white photograph of my father at the back of the bureau drawer. He didn’t look like a liar.” Peggy is eight years old when she is kidnapped by her father and brought to live in isolation in a cabin in the woods. Waking her up in the middle of the night, he tells her that the world has ended and they are the only ones left alive. She goes willingly, because she still believes in her father’s intentions. Ignorance makes her vulnerable—it’s the seed of her isolation, and it grows into the root which holds her fast over the years: why would she leave when there’s nowhere else to go?

Despite this central, gaping hole in Peggy’s understanding, Fuller is careful to present her as an intelligent, resonant character. Even before she was taken, Peggy has some sense of when people are being used. Early on, she describes her mother as crossing the room in an unusual way when they had company, “all hips and waist.” Peggy, looking back at her eight-year-old self, notes that “Even then I know she did it because people were watching.” But somehow she misses the wider pattern—who really wants what and why. As children, we understand details so well, but the larger picture not at all. By the time it comes into focus for Peggy, her lack of understanding has led to a trauma that she may never overcome.

We the Animals is shot through with the traumas of more everyday not-knowing, but they are no less visceral for their mundanity. Though Torres’ debut novel is most often written in first plural, the novel is told from the point of view of a specific one among three young brothers. The “I” hiding among the “we” knows he is missing plenty of truths about the world, and that these missing things threaten. Among others, they threaten relationships, as when the brothers, dancing in the kitchen with their father, realize that they don’t fully understand his upbringing as a “purebred” Puerto Rican, and it is “hard to tell if he was mad or just making fun.”

But Torres knows to be playful with his tonal balance. A lack of worldliness can be endearing as well as traumatic; it can break down barriers between strangers. My favorite instance of this is in a half-poem, half-banter dialogue that takes place between the three brothers and a pregnant woman they meet while playing.

‘All babies got daddies.’

‘give this to your baby. Tell him it’s from us.’

The brothers are missing some worldly manners but already possess a sad wisdom about men and childbirth. The final “us tricks” is a tingling reminder of the heady mix of innocence and clear-eyed world vision that a child narrator can bring.

The tension in most stories narrated by children stems from the fact that the current state of ignorance will not go on forever, from the promise of a coming-of-age. In We the Animals, the narrator’s mother begs him to stay six forever, but we know that is impossible. He knows that is impossible, even at six, and by the end, he is indeed grown up, with vast new reservoirs of knowledge about the world and himself in it. The secret to our love of great child narrators is that in many ways, there is not really a clear line between them and the adults they will become. Adults also have gaping holes in their models of the universe. It’s the child self as frame that allows adult readers to grapple with their ignorance, but often, this is considered something that has been grown out of.

True Grit makes no choice between portraying the universe of an adult and that of a child. Charles Portis’ characterizations are virtuosic across the board: funny, vulnerable, gritty, and always, always true. Everyone down to the peripheral, malaria-ridden horse salesman feels just strange enough to be real. But Portis’ most impressive character work is with his narrator, who is convincingly both child and adult, simultaneously. It’s the novel version of that optical illusion where your brain switches back and forth between the profiles of a smiling old woman and a young girl. The novel’s narrative is framed around Mattie Ross, looking back on the revenge mission she undertook as a fourteen-year-old, from the vantage point of her twilight years.

True Grit is a book driven by its language, but the kind of language that melts into the narrative without calling attention to itself. It’s driven by voice, present in dialogue and narration. Mattie acts and speaks her dialogue when she is fourteen but writes her narration from much later, as an old woman. Some of Portis’ line-blurring lies in mixing traits of the young and old across the lifetime: child Mattie has the business acumen of a particularly savvy adult (save a few mishaps early on in her adventure). She proves herself early in this regard, by hiring the infamous Marshall Rooster Cogburn to track her father’s killer. She negotiates several other deals with baffled adults, including a return of her late father’s recently purchased ponies. At the same time, older Mattie narrates in short, simple sentences that often retain the bluster of her younger days: “I never was afraid of animals. I remember once I rode a mean goat through a plum thicket on a dare.” Even as an older woman, Mattie’s voice asserts that plain, declarative honesty is the best way of meeting the world. This belief, alone, is enough to cement the double impression of youth and wisdom.

It is clear, though, that young Mattie is a child with the mind of a child, not just an author making his voice squeaky. Her self-confidence is not always earned, as when Rooster challenges her to load her father’s pistol, saying “All right, let me see you do it. There is powder, caps and bullets.” She replies, “I don’t want to right now. I am sleepy and I want to go to my quarters.” There are blind spots, after all, in young Mattie’s knowledge of the world, though as a child she covers them up. As an adult, Mattie is more forthcoming. The central thematic statement in the narration is this: “There is no knowing what is in a man’s heart.” Mattie says this twice from her future perch, once close to the beginning, and once towards the end. Portis understands that this is the blind spot that never goes away—it is true for children just as it is true for adults. The black box of the heart perplexes us throughout our lives, and is never fully revealed.