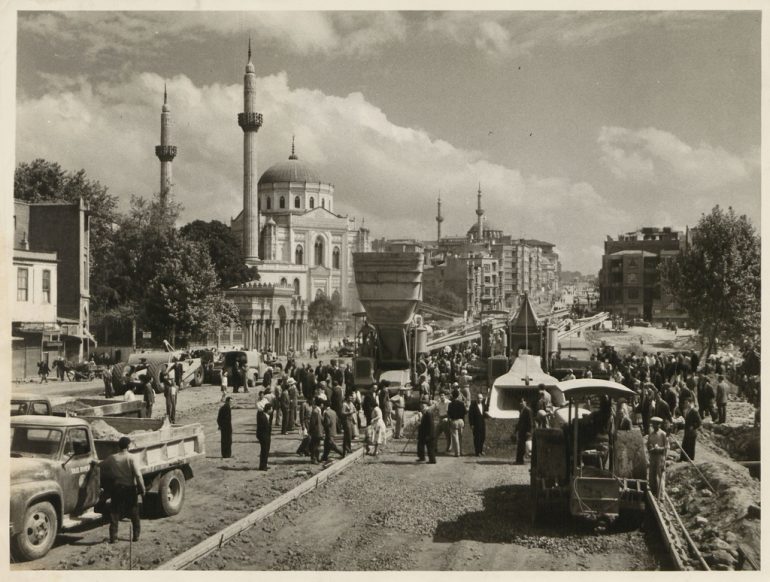 I had the honor of speaking with Dr. Mutlu Konuk Blasing and Randy Blasing, the formidable translators of Nazım Hikmet. The Blasings have translated six books of Hikmet’s poetry together, and on their own they have a long record of contributions to scholarship and poetry. Dr. Blasing is also the author of the Hikmet biography, Nazım Hikmet: The Life and Times of Turkey’s World Poet. We chatted about the challenges of translating the leftist poet and contemporary American poetry’s turn away from realism.

Randy Blasing: When Mutlu and I married, since I’m a poet, I said, “I wonder what the poets in Turkey do.” I was just curious about that. When I was in graduate school at the University of Chicago, I went over to the Near Eastern Library and could find one book of Turkish poetry, and it was Nazım Hikmet, in French. Luckily, both of us studied French in college.

We read the translations in French and loved it, and the trouble was, Hikmet’s work had not become available in Turkish. It only became available after he died in ’63. This was 1965. So the next year, when we went to Turkey, we could pick up a few little books of Hikmet’s poetry and began translating it. It was very difficult, because the shorter the poem, the harder it was to translate. It’s too vocative, it’s got to be perfect. There’s no talk. We started that way, very unsatisfactorily. It wasn’t until ’70 that there was a Selected Poems of Nazım Hikmet that we could really sink our teeth into.

These days, people go into translation as part of their career or something like that. This was just really wanting to know what he was saying. In the process, I learned some Turkish, so it was double duty. Then in 1974, American Poetry Review did a big spread on Nazım, of our translations that we had sent them. After that, Braziller took a book of his poems, which got done by Persea Books, not Michael Braziller, George Braziller’s son, when he made a new publishing house. Then he was in the public domain finally.

We were lucky because he hadn’t been translated into English before. There was a small book in the early ’50s published by a progressive political organization, New Masses, by Turkish women under aliases, but that was the only one—and it wasn’t widely published. We were fortunate in that way.

ME: Could you tell me about your process in working together?

RB: Fighting. You know, poetry uses words in almost all of their meanings. So, “Oh, what does he mean by this?” “Does he mean sadness, does he mean sorrow, does he mean grief?” It could mean any of those things in Turkish. So, battles like that a lot over the words. And then it’s a question of the poetic line. Hikmet is a free verse poet, but he’s a free verse poet who also used the line. Not a scheme, but the line. And he also put in a pretty regular line, the way that Whitman even does sometimes.

We had the conflict of what does it mean and how should it sound, and we finally came upon a solution: If it has to do with the meaning, Mutlu has the last word. If it has to do with sound, what is the poetic line, what works, I got the final say. That seemed to reduce some of the fighting, though not all entirely. It’s a struggle between what it means and how it should sound. I wouldn’t recommend it to people who aren’t married. “I’m just walking out the door right now.” [He laughs] So we stayed together at least for Nazım.

ME: How long did it take you to translate Human Landscapes from My Country? I assume by that point you had your system down, so tackling something so massive must have not been as intimidating.

RB: I would estimate four years while we were teaching.

Mutlu Konuk Blasing: No. I disagree.

RB: Mutlu disagrees. What do you think?

MKB: We were translating Human Landscapes from My Country for many years. We were. It took many years, certainly not four years.

ME: Could you talk about the challenges in translating it?

RB: Well, the challenge is mainly working in the voices of the characters. All of them have a certain inflection, a variety of Turkish that they speak. So we had in some way to suggest the particular use of Turkish of particular characters, and we actually got praised by that by one of the reviewers that we did it pretty well. That was the hardest part. Otherwise, it’s an element of doing it how you would translate a novel, because that’s what it is, a novel in poetry. There are characters that had to develop. To translate it, I remember sitting down and reading War and Peace finally. I remember sitting down and reading Joyce’s Ulyssses to get elements of epic in the culture that I had not yet read, because Hikmet drew on all manner of epics, including elements of War and Peace. Human Landscapes comes from a history of epics. Of course I’d read Homer and so on, but I also read the Aeneid again. That helped to get the scope of he was trying to do.

ME: Mutlu, would you agree that these were the challenges of this translation?

MKB: Turkish is like English from England. You can tell from the way that somebody is speaking what social class they’re from, what region of the country they are from, and that’s it. It’s like the whole work is a social history of Turkey. You can hear it in the speech and in certain grammatical constructions. American English is also sort of like that. It would be very hard to translate anything from English from any poet who actually uses the patterns of American English. It’s such a challenge. I don’t remember all that fighting, but I remember what we would come up with. Oh God, the wording.

ME: Is there something you wish you could have known when you started embarking on this journey of translation?

RB: [laughs] That translation is impossible. Wish I had known that because you set out saying, “Well, how hard can it be?” That’s the issue. You’re trying to find an equivalent that really doesn’t exist. You’re making it all up. You’re writing a new poem, but it has to be also based on the original poem. One of the reviewers, Tess Gallagher, said, We didn’t care if the poems were accurate or not. We cared if it was accurate or not, but what she means is, the poem came across in English as a poem. That was our primary goal, and that’s the most difficult combination.

MKB: I teach and I work on American poetry. That’s what my critical work is about. What you produce in translation is a poem in the target language. It’s not so much of a problem with Human Landscapes, but with little short lyric poetry, you try to find a way of saying what he’s saying. Though not necessarily in the very exact words, which sometimes don’t care about the poetical. I’ve learned a great deal from the difficulties of translating what poetry’s really all about.

RB: I think in terms of Nazım’s cultural visibility, it seems that certainly American poetry is turning away from reality. It’s off there somewhere. I pick up a volume of Poetry Magazine and I can’t for the life of me figure out what those poems are about. Nazım is a poet of the real world. He doesn’t have the kind of presence that he certainly had from 1975 to 2000, and I think he’s a victim of the flight from reality of American poetry. My concern is for Nazım’s continued viability. It’s not the viability he had twenty years ago. I can’t read American poetry and I’m a poet.

MKB: Nazım’s very well known in Europe. The first known translations of his poetry were in Italian, and he’s translated into Spanish, French, because his second wife was a native speaker of French. I think the most important thing is that I’m kind of proud that we introduced him to America. That’s something. Yes, he had followers. I mean, he’s a great poet. I just wanted to say that America needs to know about him. I think what Randy said, is right, because a lot of this poetry is like, I’m talking to myself, but you don’t need to be around, because I don’t care about you.