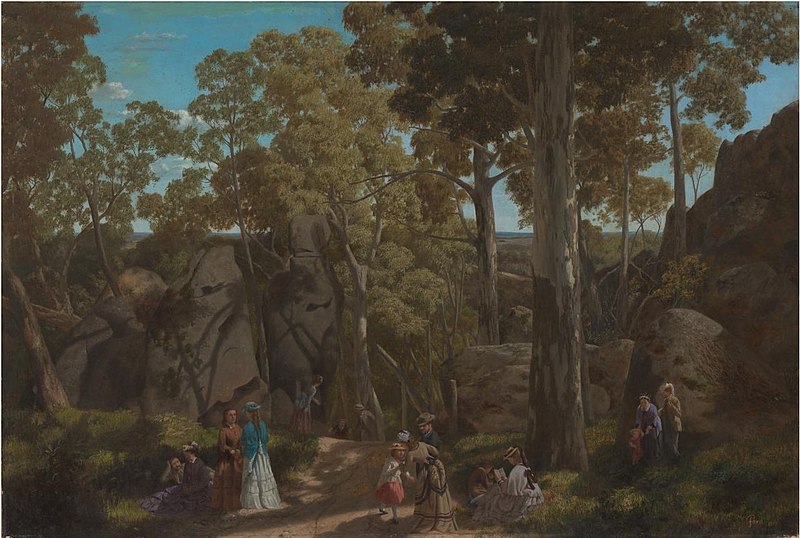 The critic Mark Fisher, writing about eeriness in fiction, summed up Joan Lindsay’s novel Picnic at Hanging Rock with a single phrase: “a disappearance can be more haunting than an apparition.” To that, I might only add: a disappearance haunts, and the haunting is not egalitarian.

Lindsay’s historical novel traces the hazy contours of a mass disappearance at the end of the Victorian era. Lindsay herself was a wealthy woman, but her characters run the gamut from poor to working-class and comfortable to rolling-in-it. Her skill in characterizing class runs a parallel gamut, from limpid (“a Public School education being by no means a guarantee of adult expression”) to stereotyping (“‘Good morning,’ said Michael in his pleasant English voice . . . . Albert’s response was equally characteristic of his class and country, ‘Hi! You! Hope you had the sense to get yourself a cuppa?’”), but one aspect of her portrayal is exceptional. Picnic at Hanging Rock is, in part, a book about the transformations that take place after trauma. Through these transformations, Lindsay examines the distortion of trauma when pressed into the molds of different class experiences, and the final shapes we are allowed to assume.

Lindsay wrote Picnic at Hanging Rock in 1967, but the setting is the year 1900, in Victoria, Australia. A widowed entrepreneur, Mrs. Appleyard, runs an expensive boarding school for teenage girls. The school holds an annual Valentine’s Day picnic at the titular site of local geological interest. Lindsay is elusive about the size and topography of Hanging Rock, but it is large and treacherous enough that three senior students and one teacher attempt to explore it one year and go missing. The disappearance is both described and not: the last we see of the three classmates, they are wandering, trancelike, across the rock. Only one reappears days later, but the ultimate fate of the others is never discovered. In the weeks and months that follow, the friends, guardians, and chance acquaintances of the missing women enter into private journeys of reckoning with their sudden, unexplained loss.

The transformations in Picnic at Hanging Rock are physical and internal, mystical and mundane. They are also notable for what they are not. Despite Lindsay’s scholastic setting and the young age of most of her central characters, she rejects a coming-of-age plot. Picnic at Hanging Rock is, in fact, a kind of anti-campus novel. The narration feeds itself on a steaming disdain for Appleyard College, particularly for its relationship with the surrounding land: “Appleyard College was already, in the year nineteen hundred, an architectural anachronism in the Australian bush—a hopeless misfit in time and place . . . . Why this particular stretch of flat sparsely wooded country a few miles out of the village of Macedon crouching at the foot of the mount, had been selected as a suitable building site, nobody will ever know.” The college is purely a money-and status-making machine for its owner and namesake, and the girls’ education is discussed mostly in terms of social niceties that are, like the school itself, mocked for their uneasy union with nature: “Insulated from natural contacts with the earth, air, and sunlight, by corsets pressing on their solar plexuses, by voluminous petticoats, cotton stockings and kid boots, the drowsy well-fed girls lounging in the shade were no more a part of their environment than figures in a photograph album, arbitrarily posed against a backcloth of cork rocks and cardboard trees.” Lindsay is anti-didactic, her teachings are un-teachings, and the only instructor she would have us trust is the rock itself.

The disappeared women belong to different socioeconomic classes, though all of them are, by Mrs. Appleyard’s calculation, “valuable to the prestige and social standing of Appleyard College.” Irma Leopold, who eventually returns, is a fabulously wealthy young heiress; Marion Quade, who is not wealthy, is a brilliant scholar; the beautiful and enigmatic Miranda (just Miranda—though her disappearance is by far the most impactful, Lindsay never supplies her a last name) is beloved by her prominent family; and the mathematical genius Greta McGraw is an irreplaceable governess. The host of people left behind also vary in terms of wealth, but the ones that Lindsay focuses on are notable mainly for their lack of extraordinary characteristics.

The Honourable Michael Fitzhubert (he prefers “Mike”) is the English nephew of a Colonel staying at his Uncle’s estate near Appleyard College. Picnicking nearby, Mike happens to see the women exploring the rock before they disappear. He is struck, watching them, by Miranda’s swan-like grace, and subsequently becomes obsessed with finding her. He fails but rescues Irma in his attempt. His failure, and Miranda’s permanent disappearance, haunts him in the form of a swan that he begins to see everywhere. Mike, always a little unequal to the expectations of his family, becomes increasingly neglectful of the social engagements “required” by his high society life, and eventually retreats fully into his escape.

Mike’s self-exile from the company of his class (though not from the material privilege it affords him) is most disturbing to Irma, who fell in love with him after her rescue. Irma’s transformation is another haunting absence: she is left without any memory of her exploration of Hanging Rock. In her separation from the other missing women, Irma seems to have turned down one kind of transformation—she was found completely unharmed, with nothing missing save her memory and, mysteriously, her corset. Rather than follow where her corset (already established as a shorthand for false and uncreative aristocratic society) and her friends have led, Irma tries to return to her privileged life, exactly as she’d left it. She also fails: not only does Mike reject her, but the other girls of the college are afraid of her. When we watch Irma through her remaining classmates’ eyes, we see that she will be forever entangled with a sublime and terrifying vision of the mystery of the picnic, “They see the walls of the gymnasium fading into an exquisite transparency, the ceiling opening up like a flower into the brilliant sky above Hanging Rock.”

Mike and Irma’s lives are shown only in the short term, and for the time being, they are changed. We know nothing of their later adult lives, save that they survive and keep their high stations. Irma becomes a countess; Albert settles down on an estate in Northern Queensland. But while the rich mourn the visions of what was lost to them, the social world around them pauses. People are mostly gentle toward Irma, fearful symbol though she may now be. Mike’s remove baffles his family but ultimately he can do as he pleases.

Thirteen-year-old Sara Waybourne is not so lucky. Unlike Irma and Mike, Sara is exceptional—she is a budding artist. A sensitive orphan in love with the missing Miranda, she is also completely penniless and attending Appleyard College only with the help of a never seen, Dickensian patron. Because of her low class, Sara doesn’t fit in at the college; Mrs. Appleyard despises her for her willfulness and for her lack of social or monetary value to the school. Miranda, it seems, was Sara’s only friend. But rather than being allowed to choose her own way of grieving, rather than becoming or fighting against becoming a part of the symbolic memory of the mystery of Hanging Rock, Sara also disappears. Or rather, she is disappeared. Mrs. Appleyard, seeing that the missing students spell the beginning of the end for her school, chooses Sara as her emotional scapegoat. She begins a campaign of terror and erasure against the child—removing her from her favorite art class, threatening to return her to the orphanage—and unlike Irma and the other women, Sara has no would-be rescuers. When, in the end, her dead body is found hidden in a patch of flowers, it is unclear whether she has taken her own life or been murdered by a crazed Mrs. Appleyard. Sara’s crumpled form is not a protagonist’s final transformation. Hers is not a protagonist’s arc through trauma because we look for agency in our protagonists.

The breadth of agency we like to read about, the kind that allows for revelatory internal and external transformations, is not available to everyone equally. This is the suffocating cruelty of our world: some are given the space and leisure to respond to trauma, and they become the main characters of the stories we tell—Irma, Mike. Others are bound by force to take the forms, or the absence of form, that is made for them. When Miranda disappeared, she became an angel, a swan, immortalized in the newspaper clippings that Lindsay weaves through her text. When Sara disappears from the world, she disappears even from the newspapers.