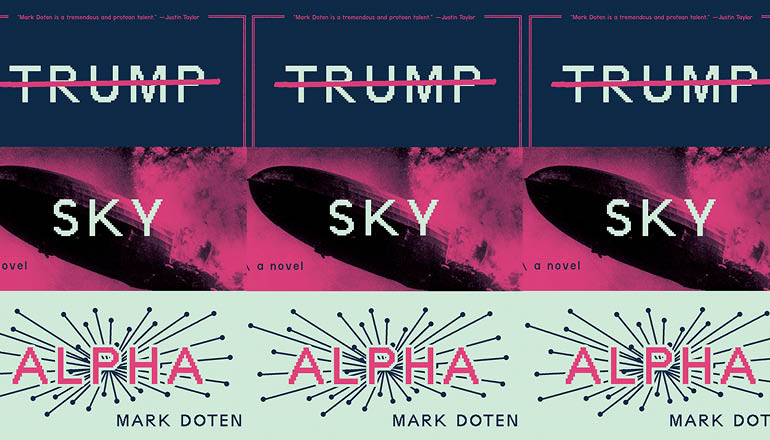 Like many Americans, I can’t bear to see or hear Trump speak—I turn the channel when CNN goes to footage of a press conference or rally—but I thought reading fiction about a world where Trump was president would be easier than reality. And I really wanted to read Mark Doten’s new novel, Trump Sky Alpha, in which Trump is a character who brings about nuclear war. But as I started reading, the book scared me. Its Trump character is so realistic and its social commentary so spot on that I couldn’t shake the feeling that its plot doesn’t seem very farfetched.

The novel opens with the fictional Trump making a bad decision. All over the world, the internet has gone down. When it comes back up, for reasons no one quite understands, he uses the nuclear codes. In response, countries bomb one another haphazardly. Entire countries go up in smoke, and Trump sneaks on to Trump Sky Alpha—something similar to Air Force One except it’s been turned into a moneymaker for his businesses—and takes off. From the air, he livestreams and tweets. His messages sound very much like the real Trump: “Generals doing great job! Say they’re glad it’s me, not Hillary! Don’t listen to lying media. We Keep America SAFE!!!”

Thirty pages later, six billion people are dead. Those who are left are either imprisoned in containment zones or are on the run—“feral.” The story picks up from the perspective of Rachel, a former internet reporter for the New York Times. She’s lost her partner and daughter in the nuclear blasts, and agrees to do an assignment for Tom Galloway, her former editor who’s trying to get the news organization back on its feet. If she does a story on “internet humor at the end of the world,” he’ll make sure she’s allowed to visit the mass grave where her family is buried.

Did I mention the book was funny? When characters aren’t getting holes drilled into their heads or dying of radiation poisoning, when journalists aren’t being imprisoned for reporting on the truth, it can be hilarious. Much of the humor comes through in the fragments Rachel uses to write her article: memes, interviews, random tweets. As the world was ending, people posted on the internet like never before: lots of cute animal photos—kittens, “horses touching heads, cheetah cub and baby chimp ‘best friends.’” People everywhere were dying, but the posts continued: “5,332 notes for a Tumblr post with a video of Muppet Crazy Harry detonating explosives. 11,328 likes and 132 comments on a post of a cartoon Solange in an elevator kicking an apocalypse zombie’s head off.”

The novel is not, however, an easy read. Reflecting the fragmentation of our culture, it moves around in time, in point of view, and in form. It can be gruesome and relentless. There is an entire chapter devoted to the man who tortures Rachel while he’s drilling holes in her head with a “Craftsman cordless.” Events and characters in this novel are grotesque, but the humor saves the novel from itself becoming grotesque.

Trump Sky Alpha also makes incisive and important points about our internet culture. When Rachel interviews a novelist, Sebastian de Rosales, who wrote about a fictional group bent on destroying the internet, he recounts a (real life) commencement speech Steve Jobs made to Stanford in 2005. In the speech, Jobs (really, and in the book) tells students to “stay hungry, stay foolish.” Sebastian tells Rachel: “I don’t want to put too fine a point on it, but what this really is, is the voice of blind, endless consumption, a consumption that doesn’t care who it rolls over and destroys.” The hippies who started the internet turned it into yet another entity that made humans consumers—the internet, after all, clears “fifty trillion dollars in transactions” each night, according to the novel. After Sebastian’s book is published, a group who sees the web as “a project of colonialism and control” decides to copy its events, “breaking” the internet through a BIND attack.

But Trump Sky Alpha is more than social commentary. Anyone can think up worst-case scenarios about life in modern America. All you have to do is turn on cable news for your fill of them. What makes this novel eloquent and urgent are its human elements: Rachel’s regrets about her last interactions with her family; the desperate, joyless sex she has with a woman in her containment zone; Tom reading Chekhov and David Sedaris to Rachel as she lays comatose after she’s had holes drilled into her brain.

When interviewing Sebastian, Rachel tells him she was somewhat ambivalent to the “resistance” after Trump was elected. She didn’t want to wear a pussy hat. “So you just let it happen,” he says. “You think I should have marched more? You think that would have made a difference?” Rachel says. The novel forces readers to ask the same questions. In times like these, what can we really do? Sebastian, from his death bed answers back: “I think that someone should have done something . . . more.”