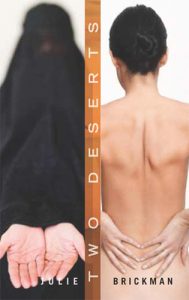 After a detour into the Land of Internet GIFs, I’m back on the music train, bringing you tunes to accompany Julie Brickman’s new story collection, Two Deserts, released the first of this month from Hopewell Publications.

Brickman’s stories examine the breadth of love—love between mother and son, husband and wife; between those ill and those well, those who lean extremist and those who don’t. The collection acknowledges myriad aspects of Capital-L-Love: endurance, lust, dedication, and small, bright sparks of joy.

I hope this playlist brings a small, bright spark of joy to your day.

Listen  to the playlist here and read on after the cut!

“Night at the Souk”: “Sin” by The Hollywood Studio Symphony

In the opening story to Brickman’s collection, Emma, an American in an Arabian Gulf country, dresses in a traditional “abayah” in order to experience life as a woman of the country, rather than as an outsider. The story is quiet and shrouded. A song lacking words felt fitting.

“The Cop, The Hooker, and the Ridealong”: “Roxanne” by Future Soundscapes

I chose this song for reasons that are perhaps obvious. Yes, there is a hooker in the story as the title says. But this softer version of the classic song better suits the characters’ resignation.

“Message from Ayshah”: “Bad Reputation” by The Dragons, et al.

I wanted to include the Joan Jett original, but silly Spotify denies its existence. Maybe if we all close our eyes and wish real hard, we can give the protagonist of this story the song every strong-willed teenage girl deserves.

“The Dying Husbands Dinner Club”: “My Moon My Man” by Feist

The women in this story all have ailing husbands. They’re frustrated. They’re sad. But they know “there’s nowhere to go but on.”

“An Empty Quarter”: “The Circle Game” by Joni Mitchell

A Muslim mother contemplates how best to rescue her son from a radical jihadist movement. Culture, country, and religion aside, she is a mother and he is her son. This song speaks to that love.

In this story, Brickman looks at repression as the cause of violence. The story focuses on the Unabomber, among other notorious terrorists.

“Iggies”: “Eleanor Rigby” by The Beatles

This is an odd duck of a story, a commentary on writers’ groups that is more self-aware than any other story in the collection. In the end it touches on the idea of “[lifting] brilliant passages…from works that have run out of copyright,” and so I present to you what The Independent lists as the most covered song (131 times as of 2008) in the world. The song also gets at the heart of the story (and the collection, really): everyone’s a little bit lonely, even in love.

This movement from “The Nutcracker Suite” suits this folktale. It’s all movement, light and airy, occasionally drifting down into the minor key.

“Gear of a Marriage”: “The Machine” by Mary Lambert

I apologize in advance for possibly making you cry. Here. Have a tissue.

The list of objects that make up “The Gear of Marriage” gradually shifts from camping gear to books on coping to complicated medical equipment. It’s sad and understated in the same way as Mary Lambert’s haunting song.

“Breakfast on the Balcony”: “Fake Plastic Trees” by Radiohead

In a time when a woman could really use a friend—a kind neighbor—no one knocks on her door. The neighbor who makes this observation admits to being exactly this kind of distant presence.

“The Rainbow Range”: “Desert Song” by Edward Sharpe and the Magnetic Zeroes

“The Rainbow Range” speaks to the dangerous draw of the desert. This song echoes that sentiment.

Poor Professor Rob has lost his lust. His female students no longer strike him as objects of desire. Instead he must face them as dynamic people. A sort of role reversal happens here—a play on gender stereotypes.

“The Back of Her”: “Generator ^ First Floor” by Freelance Whales

The protagonist in this story sends her ailing husband’s nurse home for the day. She spends the the whole day caring for her husband. It’s a physically taxing day, but happy in the simple opportunity to be together as husband and wife. This song is brief and simple in much the same way.

A priest on the edge of the Arctic circle falls in love with a man in his congregation. It’s the most honest happiness he has experienced to date, yet it’s tinged with tragedy. He must choose between his love of this man and his love of the priesthood. This song celebrates both sides of Love’s coin: joy and heartbreak.