Home
»
Critical Essays
»
Under His Eye: On The Little Clan by Iris Martin Cohen 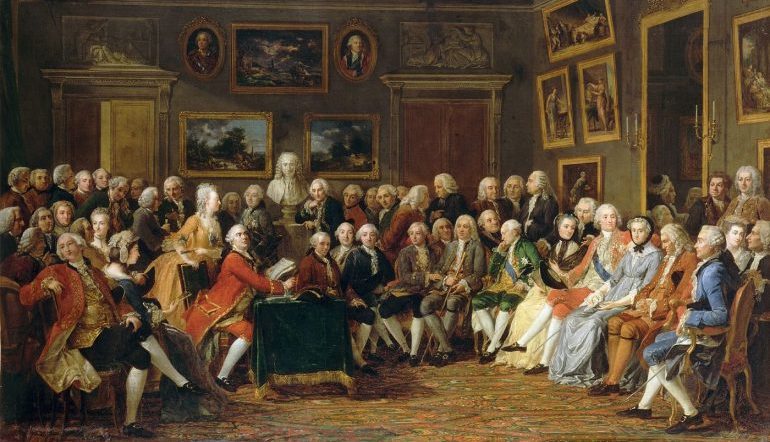 The world of Ava Gallanter, the protagonist of Iris Martin Cohen’s debut novel, The Little Clan

, is very small. It consists of the library, hallways, and apartments of the Lazarus Club, a prestigious private members club where she works as a librarian, lives rent-free, and hardly ever leaves. But to Ava, this world looms large with possibilities. It is a world of grandeur and anticipation, the pomp of all things past.

It is the world of Dead White Men. A world in which a young woman can sit around forever, dreaming of all the great things she might become and achieving nearly nothing.

Fostering dreams of literary genius, Ava, just a couple years out of college, has no interest in reading about, writing about, or living in the world of her contemporaries. Her passions lay far back in the nineteenth century, a world in which men prevailed and women’s books—if they wrote them at all—were considered secondary, frivolous. It is no wonder, then, that on the rare occasion that she sits down to write, she finds herself, time and again, stuck.

Ava is not so much trapped in the past as she is within the grip of patriarchy: that iron fist that rules us all, lulling us into staying put when we might otherwise get busy tearing down walls. She fantasizes about becoming somebody but is guided by all her role models to remain nobody. And so, naturally, she resists when her college frenemy Stephanie approaches her with an entrepreneurial proposal: to start their own literary salon within the Lazarus Club.

The motivation is different for each of these young women. Ava dreams of a place where an introvert like her can finally feel at ease, quietly discussing the brilliance of times gone by—a world in which her own ambitions and talents can come to the fore. Stephanie, a former child beauty pageant star, fears a future of middle-class domesticity. She feels the only way to avoid such a fate is to get rich, get important, or die trying. But while these young women are both attempting to create a world in which they can thrive—or, at the very least, survive—the onus of anxiety and debt is on Ava, while Stephanie flutters from one venture to the next. If she agrees to the proposal and the salon fails, Ava has a credit card bill, a lost job, and a nulled rental lease to contend with. But if she fails to rise to the occasion, she might lose Stephanie, the one person that makes her feel like a part of the contemporary world.

Thrilled and terrified, Ava agrees to the venture. But she quickly discovers that Stephanie’s real intention for the salon is to design it as a line of parties, where she can rub shoulders with millionaires in the hopes that some of the glamour might rub off on her. As Ava watches the quiet, thoughtful salon of her dreams quickly snowball into a rave brand, with models scampering in the nude and wine sloshing over antique rugs, her stomach turns at the unthinking damage caused to the mighty Lazarus Club—the scale by which she measures all things worthy, as well as her source of livelihood—and at the acute sense of, once again, trying to fit in somewhere she simply does not belong. Growing more and more anxious and despondent, she begins to wonder if there really ever was a place for her.

These days, I have a strict writing schedule that fits snuggly into my overall schedule. By “snuggly” I mean I am in charge of squeezing it in, no matter what. If I don’t insist on getting a certain amount of writing done, I know I will slip pleasantly into an Ava-like existence, anxiously obsessing over the same few chapters, going nowhere. Like Ava, who distracts herself from her own ambitions by rearranging the library books or collecting antique oddities, I know that if I don’t rein myself in whenever anxiety, stress, or fatigue inevitably strike, I’ll be leaning in a little too hard into the unpaid labor of the domestic. The cooking, the cleaning, the grocery shopping—all of these essential tasks that offer a convenient escape from creative work. All the essentials for giving off the appearance of a perfect exterior, so that no one could possibly have any complaints about me. On days when I manage to ignore the call of the dishrag and stay focused, I watch my husband, who never has qualms about concentrating on the work that matters, stepping unconcerned among the dust bunnies, Cheerios crunching underfoot, and I know that—much like the Lazarus Club—my beautiful home and alleged work-life balance have become a delightful prison. And I know that my husband is on the other side of the iron bars, a free man.

To get where they are trying to go, Ava and Stephanie require men. Rich men, powerful men, persuasive men. Men who will become investors, men who will donate their time and talent, men who will contribute their influence. Men who are willing to entertain these women’s cute ambition as long as they can ogle at their young bodies. While Stephanie is well-versed in this kind of reciprocation, Ava is befuddled, an amateur in the art of balanced flirtation, either avoiding the situation entirely or taking things too far. Then in her romantic life, when she is left unsatisfied by a sexual encounter or feeling unheard or unaccepted, she comes to the same conclusion. Like many of us, she suffers from the deep-seated, profoundly dangerous internalization that women’s endeavors simply matter less, which is also why she is embarrassed to admit she likes Edith Wharton. In a world demanding that she continually prove her worth and simultaneously demure to having any, she is left blaming herself. “I’m bad at this,” she apologizes.

“I’m bad at this,” I think as I take another Internet break while writing a particularly difficult passage, damning myself and excusing myself all at once. This is oddly easier than admitting the truth: that stopping and starting over is part of the process, that I pause because writing the truth is emotionally taxing and because why would anyone even care about what I have to say? … that struggling through does not mean I am not doing it right.

Being honest and open is a labor, more demanding and aggressive than we writers imagine it to be when, as young children, we envision long hours of blissful silence spent at a small desk with a notebook and pen. In my kid mind, this happened in a spare attic, à la Anne of Green Gables. In the fictional Ava’s mind, this takes place in an elegant study adorned with all manner of antiquities—a vision she has tried hard to bring into fruition in her actual studio apartment at the Lazarus Club. But when Ava sits down at her desk to write, she finds that she cannot pull off the honesty. She escapes to tropes, to overwrought traditions, and, finally, to pointless depictions of staring and contemplation. In spite of herself, she envies Stephanie for the comfort she feels within her trendy, glamorous parties. She too craves recognition and attention, even if it comes at the expense of her only chance of formulating some kind of social circle she can actually run in. But it is the awe of the unbelonging, the ones looking achingly at the ease of sociability while walking around with bricks tied to their ankles. When Stephanie is in the spotlight, Ava envies this attention, but when it is her time to shine, she feels awkward, out of place, spooked. All she can think of is retreating to the quiet comfort of a private room, an open notebook, endless possibilities. But, of course, when she sits with her notebook, these possibilities become too anxiously momentous, and she proceeds to fantasize once more about that moment when her work would burst out of her, pulling her out to be seen by the world, seen so hard she would most likely flee for solitude once more.

But something miraculous happens to Ava. As she burns her bridges, watching with horror as her club joyously chips away at the perfect marble and hardwood of the Lazarus Club, her anxiety and fear are slowly transformed into the freedom to begin again. She discovers that removing the weight of all that past leaves her light enough to create a future. She finds, astonished, that she is the one holding the hammer.

There is only one way out, and it involves doing the work. That might entail giving up dreams of instant fame as well as poised propriety. It might involve chucking the old, heavy traditions for the sake of a lightness, a space for change. It certainly involves giving up on some perfect little picture in our minds, the picture we project onto the minds of those around us. To be a woman at work, one must be prepared to push away what some men think and keep hammering on. To be a woman at work, one must be willing to start a fire, break down a wall.