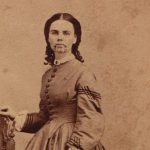 A life of reading often produces the waking sensation that you have seen a ghost. The spectrum of your experiences multiply, your emotional range balloons, you experience déjà vu by virtue of the lives you’ve lived, shared, or been privy to on the page.

Despite a lifetime of this kind of consciousness, both strangely comforting and weirdly irksome, I couldn’t have been prepared for the ghost I glimpsed while noncommittally binge watching AMC’s admittedly B-list television series, Hell on Wheels.

“That must be the new girl.  The savage one,” says Mickey McGinnes (Phil Burke) to his brother as they glimpse the back of a woman hanging laundry across the makeshift railroad town that is the setting of the series. Hell on Wheels, which just wrapped its sixth and final season, follows the tenuous construction of the Union Pacific railroad through the amorphous American West. The railroad with all its attendant corruption and vice is figured as suturing the nation which, according to the opening credits of the show’s pilot episode, is “an open wound” at the close of the American Civil War. Imagine my eye roll.

“[She was] taken captive years ago, sold to the highest heathen bidder,” Mickey continues when it’s clear, his brother Sean (Ben Esler), hasn’t heard the rumors making their way through camp. “Some say she was a slave, others an Indian princess.”  When Sean dismisses his brother’s bombastic story as “tall tales,” he is goaded into approaching the laundress, named Eva (Robin McLeavy), a new addition to the outpost’s thriving brothel. As Sean greets Eva, the camera occupies his line of sight. She turns dramatically toward him, revealing a facial tattoo—5 blue lines, some with embellishment, that run from her her lower lip to the base of her chin.

I gasp.  Sean, too, is visibly taken aback at the sight of these markings.  His jaw drops and his body jerks backward with a combination of surprise and fear. With his gaze locked on Eva, Sean falls into the mud. He regroups, non-diegetic fiddle music signals the close of the scene, and Sean stumbles away, casting one last look over his shoulder at Eva’s face.

I scroll back and watch the scene again. There’s no mistaking it. This is Olive Oatman. Or, at least, it’s her face.

Oatman was exceedingly famous during the nineteenth century, but has dropped entirely out of our national memory. She achieved almost instant celebrity in 1856 when she emerged from a 5-year “captivity” among the Tolkepaya and Mohave Indians in the Mohave ancestral lands that would soon become the Arizona territory. Oatman was 19, had lost nearly her entire family in the attack that led to her sojourn in the Mohave Desert, and was marked with the traditional facial tattooing of the Mohave Indians. Five dark blue lines of varying thickness, some with embellishments, ran from Oatman’s lower lip to the underside of her chin. She was photographed using new tintype technology—the first white woman to appear in a photo with visible tattooing. Her sensational story and image circulated widely. Within a year, Oatman had written a titillating autobiography through amanuensis. The book, which is problematic and wholly fabricated in parts, was a best seller, boasting sales of a whopping 26,000 copies in three years. Oatman embarked on a fairly lucrative lecture tour throughout the 1860s, continued circulating portraits of her striking image, and became a touchstone of the American West.

I stumbled across Olive Oatman as a doctoral candidate specializing in 19th century literature and visual studies. Her death-defying rise to notoriety and current obscurity were both fascinating and troubling to me. Oatman’s story is mysterious and marked with telling contradiction. She had been taken captive in the southwest even as the autochthonous ground she occupied was passed from Mexican to U.S. territory. When the country’s territorial avarice pushed west with the juridical, social, and military imperative for Indian removal and genocide, Oatman came east to give public speeches on the quickly shifting culture and habits of the Mohave Indians in the last years of their sovereignty. Seeking to secure the private, domestic, and feminine powers attributed to white womanhood of the era, she ascended the public sphere’s lecture podium, a platform typically reserved for men. As conflict mounted over the black lives embroiled in U.S. oppression and enslavement, Oatman spoke publicly about white slavery. For those interested in the nuances: skip Oatman’s sentimental account, and head right for Margot Mifflin’s excellent 2011 biography, The Blue Tattoo. Mifflin theorizes, and I tend to agree, that Oatman felt pressured to disavow the Mohave family she had been adopted into. What is evident from the existent information on Oatman’s return to public life is this: that in a nation and a world working hard to shore up racial and gender identities, Oatman’s obvious intimacy with Amerindians was simultaneously a curiosity and a menace. It’s the menace—the evidence that white femininity was permeable—that produced our collective amnesia on Oatman’s story.

Hell on Wheels demonstrates that Oatman’s tale, though relatively unknown, is still as charged as ever. From her introduction into the series, the show capitalizes on an anxiety about Eva’s belonging. “She was but a girl, white as we,” Mickey says. Speaking of her race and gender in the past tense, Mickey’s character invites the audience into an immediate disorientation, an inability to recognize Eva—her former girlhood locked in a timeless past with a bygone whiteness. Though she shares few biographical details with Oatman, the show plays on Eva’s conditional relation to whiteness. Eva consorts, unlike the blonde heroines of the series, with Irish and black characters that pass through the railroad town, and, later, participates in a steamy love affair with the recently emancipated exoduster Elam Ferguson (Common). In their first sexual encounter, the pair performs growing intimacy when they discuss their mutual experiences of enslavement—Eva as an American Indian captive and Elam as an enslaved man laboring in the southern plantation system.

Hell on Wheels presumes the 3.52 million viewers that tuned in for this episode (and the countless subsequent audience members garnered, like me, through streaming television) will recognize in Eva a personification of anxieties surrounding consolidations of race and gender. These anxieties are inseparable from the show’s nineteenth-century periodization and still unresolved and titillating to its contemporary viewers. Identity that is untethered from a fixed, immobile position—white, female, etc.—can, with little context or clarification, produce the same readings it might have over 150 years ago.

Olive Oatman’s appearance, her body untethered from her story, demonstrates that it isn’t just me who is haunted by forgotten literatures. As Americans, as tenuous as even that identity category seems in our current political moment, we all have a haunted past.