Home
»
Critical Essays
»
Vietnam and the Loss of Innocence 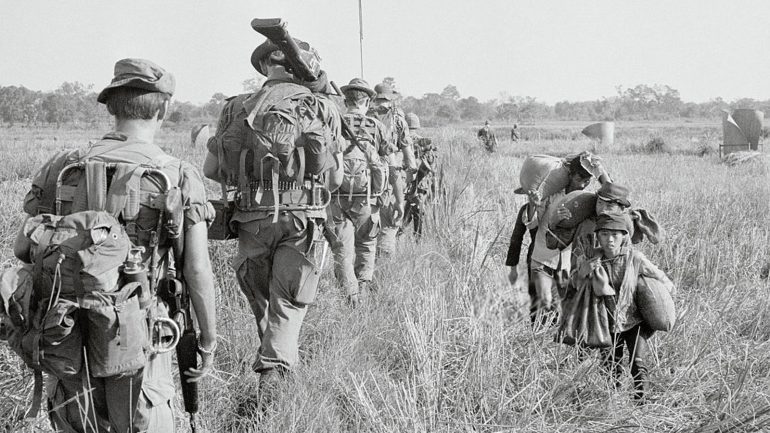 The Vietnam War has long been recognized as a turning point in the United States as a country, in which Americans lost their “innocence” with regards to politics and war, though we usually leave the war to a brief mention at the end of our American history classes and call it a day. But if you look at the war and the particular cultural moment in which it happened through the works of writers such as Robert Stone, the importance of understanding our current culturally and politically frenetic moment through the Vietnam era is pretty clear.

There’s wide recognition that Vietnam changed our attitudes toward war. Unlike Europe, which had its sea change in the brutality of the new technologies of World War I, embodied in Wilfred Owen’s “Dulce et Decorum Est,” the US came into WWI late, and was thus spared the shock of discovering trench warfare and gas. By the time World War II came around, US involvement became a symbol of American potency and the heralding of the country’s entrance as the leader of the new world order, which is now such a crucial part of American national mythology that we continuously ride off that moment today in films like the Captain America franchise and a large number of self-congratulatory superhero movies being pushed out by DC, even when they don’t concern World War II.

Perhaps it’s because of a general shame surrounding our involvement in Vietnam that we don’t focus on it much at all in our high school curriculum, but perhaps also that it represents the start of a fractured world that the Baby Boomer generation still doesn’t know how to make sense of.

Writer and journalist Robert Stone’s works on Vietnam and the 1960s certainly suggest that the particular cultural moment of the 1960s of drugs and economic excess fed into a loss of innocence. In his novel Dog Soldiers, most of Stone’s characters display a profound disillusionment with their surroundings, whether in Vietnam itself via the yellow journalist John Converse, or in his wife, Marge, who is constantly on drugs. Both of them in their own way are avoiding reality; Stone depicts a world in which no one trusts anyone else. The sentiment is familiar now, but, in some respects, shouldn’t be: one of the principal ideas of what it is to be American is that, beyond the Protestant work ethic, Americans are on the whole a trustworthy, honest lot.

In a 1984 article by the legendary New York Times critic, Michiko Kakutani, Stone says that America knew at the time that the war was a mistake, and to manage with that difficulty, passed the blame around:

Everyone was putting everybody else on—kidding themselves and lying to one another. Generals were lying to Washington, and Washington was lying to the press. And for the guys on the line, the nature of the war didn’t afford the satisfaction of taking enemy ground, so to keep morale up, the brass made the body count a measure of success. That really shocked the G.I.’s, and it reinforced that whole nightmare feeling.

Indeed in Stone’s memoir about the 1960s, Prime Green, that feeling of “passing the buck” continues. While Stone describes his and his cohort’s mostly drug-enhanced experiences as part of the exploration of the period, one can’t help but think that all the experimentation was an attempt to run away from the circumstances and pass off blame. In running to London in the late 60s, Stone describes the time as “fucking, drug taking, drinking, press agentry, but above all it was not writing—nobody, nothing.” He says it was also a time when much had been given to the American people—so much that they didn’t do anything with it—and, for all the advances we can think of in that time period, like the pioneering moon landing, to think back on that time period today through Stone’s contemporary reflections is to feel that it didn’t amount to much.

We’ve got enough similarities today. Stone notes in Prime Green that the feeling in one’s twenties that “the world I had anticipated as a child, day-dreamed about and planned adventures in, simply disappeared before I could get to it” is a “universal modern experience,” with the certainty that comes from being assured of one’s place in the world (particularly if one belongs to the white male majority). I would argue that that feeling is not a universal modern experience, but one that comes every once in a while during a profound upheaval in the order of the world, and that it may be the hallmark of life to come in repetition.

Millennials, likely the most reviled generation in existence according to news headlines, came of age around the time of the 2008 housing crisis and a technological evolution that shattered the expectations we held of work and life. The prosperity of the early 2000s, as well as our own parents’ unprecedented success in the 60s and 70s, is what set the stage for what millennials (myself included) expected of our lives and what we were expected to materially achieve. The well-researched and written article, “Generation Screwed,” documents this, and presents enough evidence that even a Baby Boomer could understand the source of our own disillusionment and not following the “set paths” to adulthood—full-time job, marriage, house, babies—that their counter-culture eschewed.

While we’ve certainly increased the number of voices writing about Vietnam, we still haven’t learned from that war or that time period. If there is one concrete lesson to be learned from that time, it is to key into our discontent and lack of trust to hold our politicians accountable, and to embody change ourselves. The odds are stacked against us, but we won’t be able to confront our country’s past if we allow ourselves to be numbed to our surroundings.