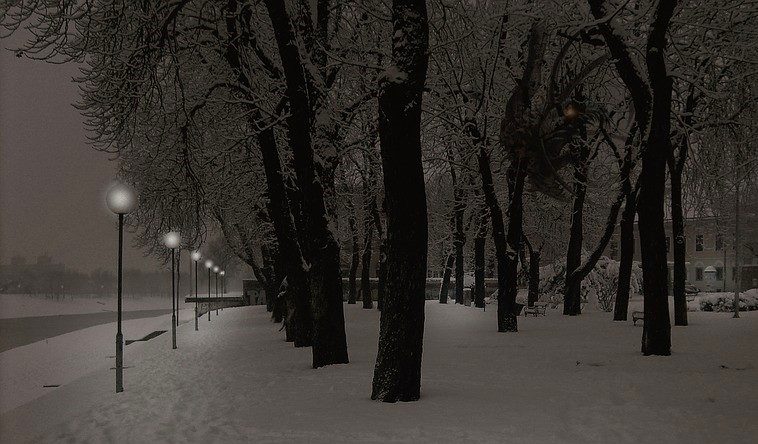 “No one perhaps has ever felt passionately towards a lead pencil,” begins Virginia Woolf’s essay “Street Haunting.” It is the idea of the pencil, and the prospect of its purchase, that sends her narrator wandering through the streets of London at dusk in winter.

Woolf’s pencil reminds me of what psychoanalyst Donald Winnicott called “transitional phenomena,” those objects like the child’s tattered blanket, or a well-worn teddy bear, that exist at the threshold of the self—substitutes for the mother’s body that are still perceived as separate but not fully recognized as belonging to the outside world. They are not-me objects that mediate between one’s inner reality and the shared external world, “a resting place for the individual engaged in the perpetual human task of keeping inner and outer reality separate and interrelated.” In “Street Haunting,” the mind drifts as the body drifts, and yet the pencil remains the point of departure and return.

“Street Haunting” starts with the escape from the house, the room of one’s own. To enter the public sphere, the anonymity of the crowds, is to shed soft domestic comforts, the familiar sense of oneself: “For there we sit surrounded by objects which perpetually express the oddity of our own temperaments and enforces the memories of our own experience.” Woolf’s room—with its china bowl and the brown stain on the carpet—is a place of fixity, whereas the street knows nothing but movement and flow, the self unsplit and uncontained. The search for the pencil, the transitional object, is the search for connectedness, for undifferentiated oneness, when the boundaries between self and world thin to their most tenuous.

In her diary, Woolf once wrote, “How immense must be the force of life which turns a baby who can just distinguish a great blot of blue and purple on a black background, into the child who thirteen years later can feel all that I felt on May 5th 1895—now almost exactly to a day, forty-four years ago—when my mother died,” and it could be that “Street Haunting” is such a prelapsarian return—to the early colorful sensual experiences of the child, to the phenomenological aspects of the world released from the burden of understanding.

Part of street haunting is also dipping into consciousnesses that are otherwise remote (“inaccessible lanterns” she calls them later). Points of view become fluid. Woolf was interested in giving voice to those small zones of mystery known as other people, through a sort of imaginative projection that we might today label a form of psychic colonization. Midway through the essay, the narrator temporarily inserts herself into the mind of a dwarf trying on shoes in a shop. “What, then, is it like to be a dwarf?” she asks. Afterwards, she describes seeing two blind men, an old woman, a bearded Jew. With a fair amount of bourgeois condescension, she speculates about their “fantastic” lives and in the process exoticizes their vulnerability—they cannot escape their bodies as easily as Woolf. For her, they symbolize the fringes of society, a state that both excites and unsettles her, giving physical form to the “outside” she craves to know. “Walking home through the desolation one could tell oneself the story of the dwarf, of the blind men, of the party in the Mayfair mansion, of the quarrel in the stationer’s shop. Into each of these lives one could penetrate a little way, far enough to give oneself the illusion that one is not tethered to a single mind, but can put on briefly for a few minutes the bodies and minds of others,” she writes.

The divisions between self and other, past and present, the perceived and the real, are blurred in “Street Haunting;” all flows together. It is as if the conventional boundary markers we have come to expect in literature, the traditional means of organizing experience, have been mostly dissolved. We ride and float and swell, cresting wave upon clausal wave, pulled deeper and deeper into the currents of thought, until the moment when the syntax can longer sustain such intensity; something breaks and the object resurfaces. The pencil, like a fussy bureaucrat, reorients the reader in time and space.

“It is, in fact, the stroke of six; it is a winter’s evening; we are walking to the Strand to buy a pencil.”

When the pencil returns, the prose has a way of stiffening back into shape. Woolf’s sentences become shorter, and the distinctions between individuals become clearer as reality slowly chisels itself out again. The pencil ballasts the narrator to the social world, a weight upon the free-floating eye/I. This is the essay’s primary tension, endowing it with a sense of narrative momentum: we wander, looking and daydreaming, forgetting about the pencil until it reappears again.

The repetition of the pencil, the story of its loss and reappearance, works as the essay’s organizing principle. Woolf’s treatment of it is similar to the fort-da game described by Freud in “Beyond the Pleasure Principle,” in which the child similarly rehearses small acts of disappearance:

“The child had a wooden reel with a piece of string tied round it. It never occurred to him to pull it along the floor behind him, for instance, and play at its being a carriage. What he did was to hold the reel by the string and very skillfully throw it over the edge of his curtained cot, so that it disappeared into it, at the same time uttering his expressive ‘o-o-o-o’. He then pulled the reel out of the cot again by the string and hailed its reappearance with a joyful ‘da’ [‘there’]. This, then, was the complete game-disappearance and return.”

The wooden reel, like Winnicott’s transitional phenomena, is a surrogate for the displaced mother, and the child’s casting away of it is seen as a way of reconciling, and gaining mastery over, this essential lack. We know the death of Woolf’s own mother—the inspiration for Mrs. Ramsay in To the Lighthouse—was a great trauma. In her diaries, she mourned what she had lost: “To be a family surrounded; to go one exploring and adventuring privately while all the while the family as a whole continued its prosaic, rumbling progress.” The death of her mother Woolf framed as kind of expulsion from Eden, the event after which Woolf “tumbled out of the family shelter” that had become “cracked and gashed.” She describes the scene in the stationer’s shop, when buying the pencil, as searching for a ghost.

The pencil is the joint between autonomy and connectedness, freedom and security, and the individual and the collective. Woolf limns the transcendent pleasures of traveling toward the outermost precincts of the self only to be reeled back again into the world of solid forms. I think she was looking for the furthest edge of solitude, its utmost ecstatic limit, before it crosses into madness. Insanity, after all, is the tragic point at which one’s personal signs supersede the shared reality. It is the point at which we are flooded; when there is nothing solid to grab onto, the water overcoming us.

At the conclusion of “Street Haunting,” with the streets emptied, the narrator returns home. She returns to the safety of objects, the self once again securely bordered and housed. “Here again is the usual door; here the chair turned as we left it and the china bowl and the brown ring on the carpet.” Perhaps we invent disappearances only in the hope of being retrieved.

In the end, Winnicott argues, children outgrow the blanket but not the need for it. In fact, he claims, our blankets only become more complex, evolving into the greater and more intricate abstractions we call art. Works of art, shared and yet solitary, commonly experienced and yet privately felt, enact a deep paradox: our need to be connected and separate both. What passes between the primal ruptures of birth and death are a long succession of symbols created to redeem these losses; as Woolf wrote of her mother in her diary, “It is perfectly true that she obsessed me, in spite of the fact that she died when I was thirteen, until I was forty-four.” It is significant that the lost object in “Street Haunting” is a tool for writing—only after To The Lighthouse did she declare herself purged: “I wrote the book quickly, and when it was written, I ceased to be obsessed with my mother. I no longer hear her voice; I do not see her.”

Anya Ventura is a Visiting Assistant Professor at the University of Iowa.