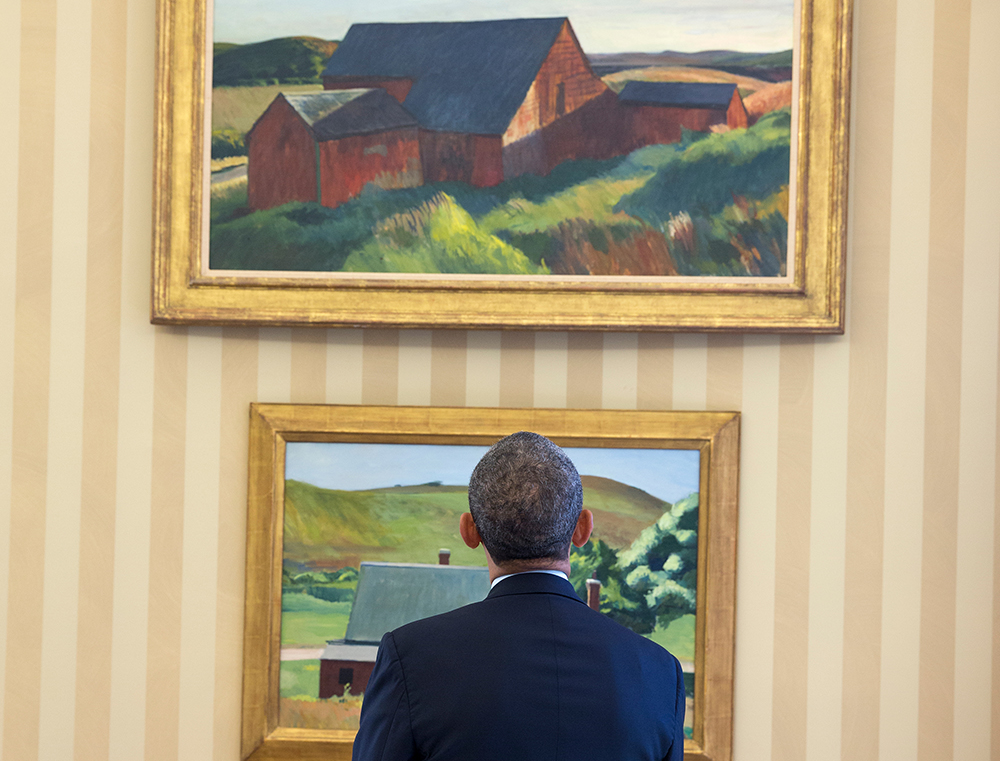 Woman in the Sun is located in the large hall next to the elevators on the sixth floor of the new Whitney Museum. The good thing is that most people go straight for the exhibition so that the space in front of the painting isn’t crowded – it gives me time to take it all in, admire its monumental proportions, the application of the paint, the geometrical shapes that structure the room and the light – and yes, the light especially, that quasi-trapezoid so dear to Hopper, cut out on the floor, light both harsh and – something else, hopeful perhaps, as if it prefigured a scene of Annunciation, making the woman’s nude body both assertive and vulnerable.

“The shadow of dark hangs over them, making whatever narratives we construct around them seem sentimental and beside the point.” ― Mark Strand.

I’ve started taking notes, as I often do in museums with paintings that I especially like. Jo is the model here, as with most female figures in Hopper’s paintings. Compensation for Ed basically sabotaging her career and undervaluing her? She looks so stark here, yet something undeniably tender, in the slope of the thighs, gaze hinting at an interiority inaccessible to us, wrist negligently holding that cigarette. Where is she? Green hills outside. Time of day? Is this her room? But it’s so bare. Is this a motel? What is she waiting for?

Hopper’s paintings always engender more questions than they can answer. In fact, they don’t answer at all, and very quickly, any tentative to wax poetic about them turns cliché, gauche, flat. What is it with those paintings that we can never seem to quite get properly into words? They’re part of our mainstream subconscious – hung across the nation in doctors’ and bankers’ and insurance firms’ offices – yet they remain remote, aloof in their supposedly familiar settings.

“Now, under a fluorescence that makes her arms appear too bare and her dress shimmer from rose to salmon to shades of red for which there’s no approximation, they’ve fallen silent.” ― Stuart Dybek

How do you say a shade of red for which no word exists? Dybek is describing the couple from Nighthawks in ‘Insomnia,’ a text included in the series “Nighthawks,” and everything always circles back to this impossibility of saying, of bridging the gap between the visual sensation and the verbal transposition. This red exists to be beheld by the eye, not to be pinned down by a word.

Writers and artists have always been fascinated by how language is inherently an approximation of things. You would have to be mad to think that every word has a specific, immovable referent, and that every thing has a specific word to describe it. Literature is born, precisely, out of the slippages between materiality and textuality, between the world and the word. When it comes to images, nothing can make them coincide with the words used to describe them – pictures are worth a thousand words, and much, much more because no amount of nouns, verbs, and adjectives can quite pinpoint the latent instability of the image.

“It wasn’t necessarily Sunday. That word was tacked on later by someone else.” ― Edward Hopper

Take Early Sunday Morning, for example. The low row of windows and storefronts, mute and opaque to the eye; the clean-cut lines separating the green walls at street level from the red brick one floor up from the sky that’s a humming shade of blue. There’s no one around; the shadows are long on the sunny sidewalk; the impression of silence is monumental. The tilt of the barber’s pole makes the scene vacillate ever so slightly; an insidiously minute sensation of vertigo infiltrates the painting.

Or take Nighthawks. This isn’t a scene rooted in any kind of reality: Jeremiah Moss tried to track down the diner that inspired Hopper, but in vain. There is no single Nighthawks diner – the painting was synthesized from many different sources. This already tips us off to a fundamental truth: Hopper isn’t trafficking in verisimilitude, but in imagination. Much has been said about the smooth continuous glass of the windowpane that makes the diner look like an aquarium, about the lack of a door to get into the diner, which enhances the feeling of entrapment, about both the archetypal quality and the remoteness of the characters depicted, which invoke no easy allegory, save for the ones lazy critics have come up with – urban loneliness, et al.

The recurring impression we get from both looking at Hopper’s paintings and reading the poems, stories, and essays that were inspired by those paintings, is that the painting systematically eludes the text. In The Art and the Artist, Gail Levin reminds us that Hopper refused to be a “narrative painter.” She explains the tremendous appeal he still has by his desire to go beyond the mere representation of reality without ever doing more than suggesting a symbolic content: symbolism is kept implicit, unstable. Something encoded deep within the painting – both its content and form – is preventing narration from coalescing around the image.

Maybe that something is desire. After all, to remain dynamic, desire calls for its own constant frustration: once sated, it no longer is desire. Hopper’s paintings make us desire a story, so we can figure out what it – the light, the pose, the colors – all means, but never give us the satisfaction of that story; they open up a thousand different possibilities, yet never resolve anything. That couple of Nighthawks could be coming from anywhere, heading anywhere, doing anything; they could have just met by chance, or they could be on a night out, or they could be reuniting after years of estrangement. Who knows?

Everything is always waiting for something here. For someone to say something, anything, goddamnit; for the barman to finish his gesture and the woman to raise her cigarette to her lips; for the wind to rattle the blinds in the silent windows; for those trapezoids of light to close – the lines rushing toward each other but never intersecting. The revelation never comes. And so we keep writing about it.