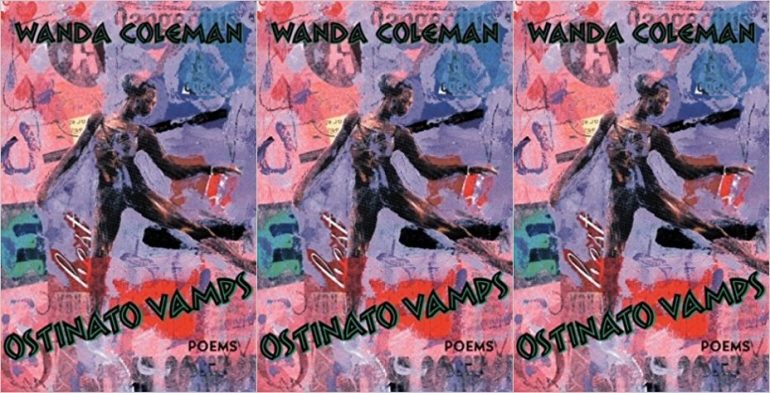 The gravitational pull of reading any of Wanda Coleman’s work is as elusive as it is startlingly raw and cathartic—the unofficial poet laureate of Los Angeles has always teetered between nuance and nihilism, between and distraction and destruction. Ostinato Vamps, a collection of her most powerful and provocative poems, was published over a decade ago and bravely explored intersectionality before it was clearly conceptualized.

Despite her previous collections garnering her awards and recognition (1983’s Imagoes snagged Coleman a National Endowment for the Arts grant and a Guggenheim Fellowship for Poetry), Ostinato Vamps is arguably her most ostentatious offering to date. Its title infers repeated musicality, and there is undeniable rhythm and lyricism in her work. However, Coleman deviates from the assumption that there is anything lighthearted and jovial about this particular compilation. Although all of Coleman’s catalog hinges on internal and external struggles, Ostinato Vamps confronts the combustibility of the inherent dangers of Black womanhood combined with poverty, oppression, and almost toxic levels of self-awareness.

The book is split into four sections: “Red Noir” houses poems that dabble in moral ambiguity; “Ostinato Vamps” explores Coleman’s tumultuous and often heart-wrenching relationship with music; “Two Fugues and a Prayer” illustrates her inevitable descent into rage and slight madness; “The Weighing of My Heart” writhes in unexpected vulnerability and provides valuable insight into the softer side of Coleman. Despite her lucid love of language (she can make the most treacherous occurrences sound borderline seductive), Coleman’s greatest gift is the way she spells out Black pain that is anchored with heavy historical context; pain that is endemic to the Black experience—pain that Coleman contextualized as constantly being forced (similar to San Francisco 49ers quarterback Colin Kaepernick and other Black athletes who are currently protesting the national anthem) to prioritize patriotism over Blackness.

Coleman and Kaepernick, despite utilizing vastly different platforms to convey their message, both personify the frustration many Black people feel in this country when it comes to the way we have been treated, abused, vilified, and destroyed. While Kaepernick chooses to express his disdain by refusing to stand for the anthem before the start of his games, his reasoning cannot simply be summed up by a single gesture. “I am not going to stand up to show pride in a flag for a country that oppresses Black people and people of color,” Kaepernick disclosed in past post-game interviews. “There are bodies in the street and people getting paid leave and getting away with murder.”

This history of the state-sanctioned executions of Black people is something that Coleman was extremely vocal about and scrutinized in Ostinato Vamps. “Thirty Seconds over America” described a woman (possibly Coleman) “sleepwalking . . . on hotbeds of racial strain” while “Revisiting Fear and Memphis” spoke of “civil war of uncivil assassination” and “sons named Osceola, daughters named Sojourner.” With “The African beneath the American,” Coleman truly expressed her contempt for the way Black people have been, and continue to be, disposable in the eyes of America. She claimed to have spoken from “noose-thickened lips” before reciting her newly formed Pledge of Allegiance: “i strive because i must / i love out of spite / i pledge allegiance to a standard of ashes, embers, and soot / this is my anthem, a strident jig in the night / to that music beyond jazz.”

While Ostinato Vamps doesn’t necessarily serve as Coleman’s magnum opus; it is a brilliant continuation of her analysis surrounding the complex issues that have plagued and continue to plague Black people. Kaepernick’s recent rebellion against the American flag only punctuates Coleman’s message about this country’s obsession with the desecration of Black bodies cloaked in acerbic nationalism; not only is it disturbing, but it also has no signs of stopping. The bravery of Coleman and Kaepernick should not only be applauded, but sustained in order for Black people to feel safe in a country that was literally built off of our backs.