Home
»
Reading
»
We miss out when US publishers lag behind in adopting global titles: an Interview with Jim Pascual Agustin 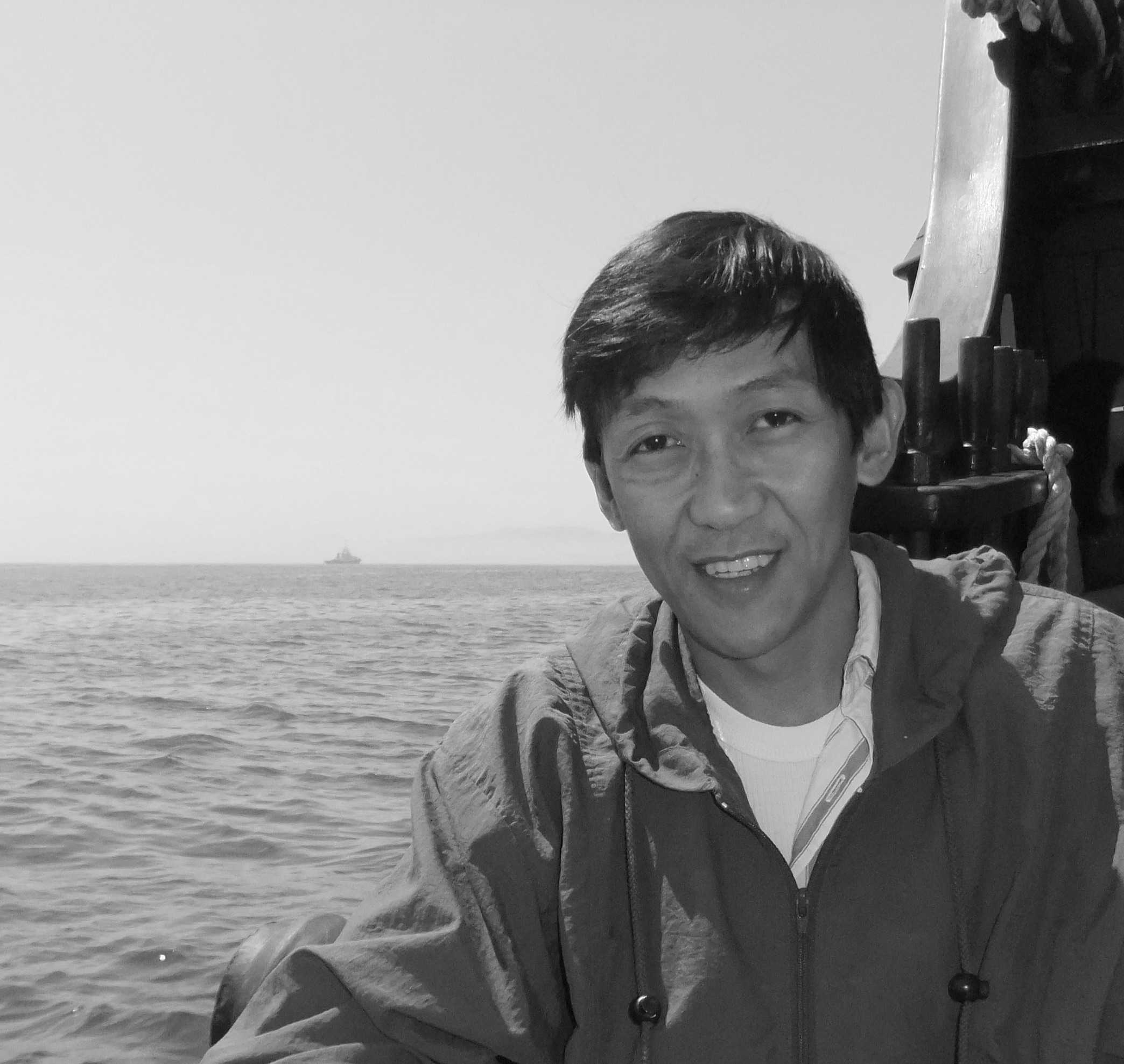 Why and when did you move from the Philippines to South Africa and how does one choose South Africa in particular?

The quick answer would be because of a girl I met on holiday in the mountainous regions Philippines of the north. When I flew to South Africa on 22 October 1994, I only meant to visit, to see her again. I always feel like a time traveler each time I try to explain how I ended up practically halfway around the planet from where my feet first touched ground. I go backwards and forwards, sometimes I get a clearer view, while at other times the weight of regret muddles the present, darkens the future. I knew close to nothing about the country before arriving, just Hollywood-manufactured images and whatever I gathered from books by JM Coetzee, Nadine Gordimer, Christopher Hope, and Dennis Brutus. The heart has its own logic, its own manner of making you do unexpected things.

In the end I didn’t really choose South Africa. Only after a few years of living here would I begin to see the land for its own captivating wonders and promise, even as I try to understand the dark past that haunts its people. You could say I left one troubled land for another. But now I have two homes, and it comes as both a gift and a burden not many may understand.

I ended up marrying this amazing girl who would change my life forever.

You have an active literary life there. Are you also published there as well as the Philippines?

It took me a while to find the courage to submit to journals here. I didn’t know where to start. There were no newspapers or weekly magazines that featured poetry pages, no journals that came out regularly, and the universities didn’t seem to have literary outlets that were open to non-students. Without admitting it to myself then, I was definitely struggling to adjust to this new world. I couldn’t just blend in no matter how hard I tried. Luckily, the written word proved a better bridge than my (strangely American) accent, the color of my skin, or the shape of my eyes. Off the top of my head, the few South African publications that have accepted my work since I started submitting are New Coin (Rhodes University), New Contrast, Aerodrome (online), The Sol Plaatje European Union Anthology, In the Heat of Shadows: Contemporary South African poetry (edited by Dennis Hirson and Robert Berold), and LitNet (online).

What are some awards and honors you’ve earned from either or any country?

Early in my writing I’ve had an uneasy feeling about awards and contests. Perhaps it’s a little unfair to have a blanket distrust of those called upon to judge the works of others. In the end it comes down to personal preferences to a large extent, which in turn depend on what one has been exposed to. Always a pinch of salt.

The only recognition I’ve ever received in the Philippines was when my poetry book in Filipino, Baha-bahagdang Karupukan, was shortlisted for the (Filipino) National Book Award in 2012. Before I left the country I entered as many competitions as I could, never winning a single thing. The poetry books I’ve published there have at least received good reviews.

I’ve had better luck in South Africa. In 2013, “Village Potter’s Wife” won the DALRO Second Prize for poetry that had appeared the previous year in New Coin. I had completely forgotten that I had submitted the poem since no one ever responded to my follow-up email queries. So when I got the email I thought for a while that it was a prank, like those messages saying you’ve won millions at a lottery you hadn’t even entered.

In 2014 and then again in 2015, I won Third Prize at the Sol Plaatje European Union Poetry Awards for the poems “Illegal, Undocumented” and “Baleka, What do You Know of Tenders and Thieves? Or Cockroaches for that Matter?” respectively.

My poem “Wood and String” was given honorable mention at a Poetry International competition where poets were asked to respond to videos posted on the website. I love poetry prompts.

In December 2015, Pirene’s Fountain editors nominated my poem “The Hand that Left the Puppet Gasping” for a Pushcart. That same poem has had a long history of being rejected by about a dozen publications, which made the nomination mean more to me.

A few times I entered competitions that required a fee and never won anything. Also the seemingly minimal fee in US dollars or whatever currency converts to quite a lot now with the SA Rand’s plummeting value, thanks to a single politician’s handiwork, so I’ve decided never again. On the matter of fees, I get taken aback by “reading fees” required by some publications. I do understand when it comes to manuscripts (although even that’s something that bothers me), but for a single poem that’s just going into a slush pile? It’s worse than entering the lottery.

You had a poem, “My Flesh is Not My Heart: A Lesson to Colonizers” published in World Literature Today. It’s one of my favorite poems of all time and I’ve taped it beside my bathroom mirror so I can read it every day. Tell us a little about that poem. How did you get it into WLT?

I wrote it over two days, starting on the 5th of April 2014. I was then an active participant of an online critique group called The Boathouse. We were asked to write to this prompt: “We don’t believe, we only fear,” a quote from an episode of Grimm. Prompts are useful in giving you a starting point. Sometimes the piece takes off and sometimes it falls flat, but that first push could just take you on an unexpected journey.

It would have been more predictable to go for a poem that kept to the horror genre, but at that point I was thinking of starting a series of poems on the American invasion of the Philippines. I decided to mix them. I recalled the title of an adult Filipino film, also set in that historical period, called “Virgin Forest” which was released when I was too young to go and see. I’ve always been fascinated by myths and legends, and how they can be used to either sow fear or hope, if not some kind of source of strength. In a way I tried to imagine a scene from a film I had never seen.

I can’t remember when I first heard of World Literature Today, but I’ve been hoping to get a poem accepted there for at least a year. I saw the call for submissions on a website somewhere, and thought this poem might just fit in. So I sent the poem along with a few others. I try to forget about a submission, although I keep a small record of when and where I submit work. Through the years I’ve learned not to hope too much. I also know that without hope you might as well not write, or live. This poem got lucky when it found the right reader in WLT.

Why not publish in South Africa or send your manuscripts to Europe, Canada, or the US rather than continue to publish in the Philippines?

The Philippine publishing landscape has changed a lot since I left. Many years ago when I was still teaching in Manila, people thought it was a novel idea that I required my students to buy poetry books by Filipino authors. In my small way I was challenging the entrenched system that put emphasis on fiction in English by foreign authors. I know that Filipino books have finally begun to capture the imagination of young readers there, but one chain of book stores continues to monopolize distribution that favors foreign books. Independent book stores are definitely growing in number and they are more supportive of publishers of local books. It’s not paradise, but independent and university-affiliated publishers regularly seek and put out poetry titles.

I’ve been wanting to put a book out in South Africa for a couple of years now, but it’s a much smaller market than the Philippines. SA readers at least have public libraries that encourage greater readership. But there are also far bigger problems like the lack of qualified teachers and widespread poverty that hold back literacy. Production of poetry books lies mostly in the hands of a few struggling and brave independent publishers. Established publishing houses generally do not accept poetry manuscripts, pushing some writers to self-publish. I may have to come up with a prose manuscript, somehow prove that there are readers for my type of writing, and then try to sell my poetry. Not sure I can pull that one off yet.

I’ve sent manuscripts to a handful of independent publishers in the US and the UK. So far nothing but rejections or not even a reply. I’ve even proposed a poetry picturebook, but the UK publisher who liked my writing said it was too sophisticated. She said I would also need to be living in London so I can promote the book four days a week at various schools. (Laughter). I will keep trying and hoping.

The going’s definitely not easy for someone like me living in this part of the world.

What difference do you think it’d make to your career if your work were published in French, Italian, or other languages and distributed in those countries?

Oh, that would be a dream! I’ve only had some poems translated and published in French, thanks to Dennis Hirson. I was surprised and delighted when he included me in the anthology Pas de blessure, pas d’historie: Poemes d’Afrique du Sud 1996-2013. It made me wish I could read the translations, and also to see my work in other languages. As I am certain something might be lost in translation, a good one will always be better than none at all. For each writer really just wants to reach as many people as possible, to somehow touch them across time and space with mere words.

What South Africans do you read?

Mostly poetry, which I tend to read more than fiction:

I’m reading Bone of Bamboo. In it one of my favorite poems is “Ghosts of Sweaty Air.” It’s an existentialist piece that weaves together thoughts on growing older and living in a foreign place. You talk about looking back on childhood and seeing now something complicated that was then simple. You talk about the physical adjustments necessary when living in another country. It reminds me of those times we as humans feel so distant from the little person who did those childhood things. It also reminds me of things I’ve done in my life that I only dreamed about or could never have fathomed as a child, such as living in multiple countries. What does that poem mean to you? How do you think it bespeaks other themes in your work?

I’m never comfortable explaining my own poems. More than others I’ve written, “Ghosts of Sweaty Air” comes too close to an autobiography. I prefer throwing together personal and imagined moments, making up narratives that never took place so that something more worthy of mere facts emerges. This poem is almost a template for longing, my longing. One carries some memory of home wherever one goes. Sometimes that weight is a stone pressed against your chest, sometimes it becomes feathers sprouting on your shoulder blades.

Who are some writers you favor or have been inspired by?

Just from memory and in no order:

How can people reading this interview access more of your work?

My completely random blog. I also have a page on Goodreads.com. And in this reading given at the Day of the Imprisoned Writer event in South Africa.