Home
»
Uncategorized
»
We The Animals 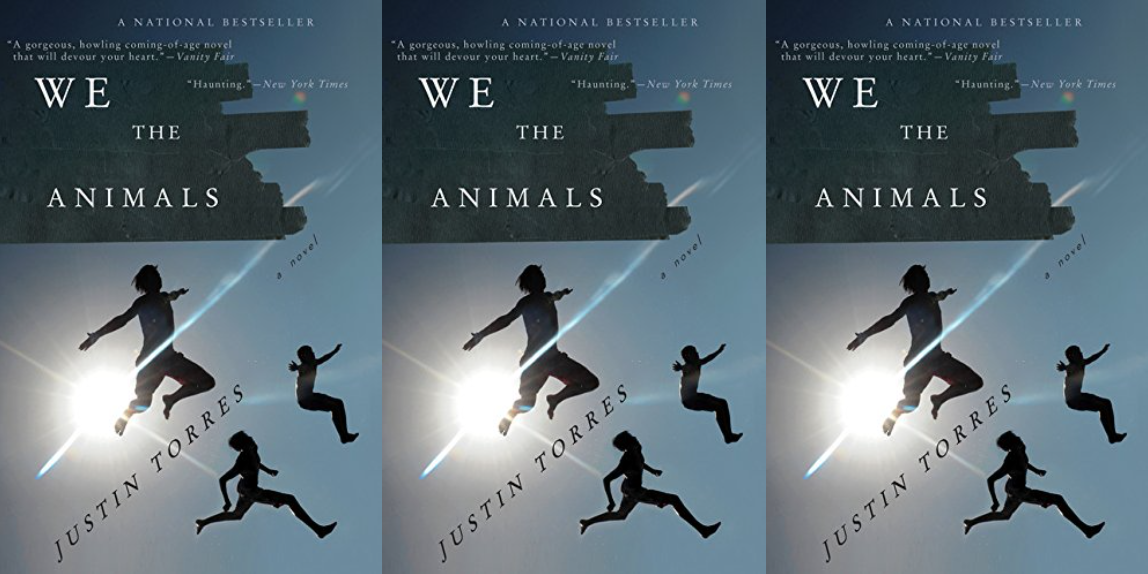 In We the Animals, Justin Torres demonstrates how crafting one tactile sentence after another can transform even the most ugly imaginations, experiences, and memories into a work beautiful to behold. In this debut semi-autobiographical novel, Torres asserts himself as a master of detail and haunting images as he orchestrates the inevitable life of a boy who is the third son of his too-young parents, uprooted from Brooklyn to upstate New York.

Torres’s language throws the reader into a family so harsh and chaotic in their love that they’re always tearing each other to pieces, or otherwise scrambling to stay together. His parents fight and his father beats them all, sometimes disappearing for weeks on end; his mother works overnight shifts and rarely knows the day or the time. The boys, meanwhile, roam free and wild like locusts: “invaders, marauders, scavengers, the devil’s army on earth… castaways, stowaways, hideaways, fugitives, punks, city slickers, bastards.”

There is a hard determinism at work here, too, that the family battles against daily, sometimes raging against it, sometimes succumbing:

“You talking about escaping?” Ma asked.
“Nobody,” Paps said. “Not us. Not them. Nobody’s ever escaping this.” He raised his head and swept his arm out in front of him. “This.”
Finally, we were silent.

Most of the time the family holds fast—the story, revealingly, is often told in the first person plural—but eventually we realize that the narrator sees life differently, that he seeks out a different way of understanding his world.

At seven, for example, he’s taught to swim, and we see the way that his “I” separates from the “we” of his brothers; for him, being brave and tough is also a matter of knowing that he belongs: “I let myself slide down and down, and when I opened my eyes what I discovered there: black-green murkiness, an underwater world, terror. I sank down for a long time, disoriented and writhing, and then suddenly I was swimming… I swam toward their bobbing mass, and there under the stars, I was wanted… They had never looked at me with such intensity and hope.”

Near the end, when the boys are little older, teenagers maybe, the rest of the family realizes that the narrator is different, too—it would be a spoiler to reveal how—and they turn in on the narrator and he against them. Yet even then the love holds strong, and they comfort him. “She watches him, and she wants to tell him that he can put all his hate on her; she will take it all, if that’s what he needs her to do. Listen, really listen, and that’s what she is saying in her silence. The boy can’t help but hear.”

Abby Travis is the editorial assistant and senior nonfiction reader at Ploughshares. She received her MFA in creative nonfiction from Emerson College, where she teaches creative writing, composition, and research writing. Her essays and reviews have appeared in the Crab Orchard Review as finalist for the John Guyon Literary Nonfiction Prize, The Rectangle, Rain Taxi Review of Books, on Powell's Books' Review-a-Day online, and elsewhere.