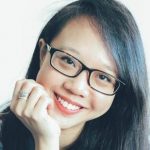 Cheryl Julia Lee is the author of the poetry collection We Were Always Eating Expired Things (Math Paper Press, Singapore), which was shortlisted for the Singapore Literature Prize in 2016. She is pursuing her PhD in contemporary fiction at Durham University, and her work has been published in Columbia Journal, Icarus, and Quarterly Literary Review Singapore, among others.

How did you arrive at writing poetry, and which writers have inspired you?

I have always been a reader and for me, reading quite naturally leads into writing. Roland Barthes puts this very nicely in The Preparation of the Novel: “The point of departure is the pleasure, the feeling of joy, of jubilation, of fulfillment that reading certain texts written by others produces in me… I write because I read.” Everything I write is a response.

So every book I read, every place I go, every person I encounter in my life becomes a potential source of inspiration. Some writers whose work I am drawn to, who perhaps have left a bigger impact on my writing than others, are Ann Quin, Vladimir Nabokov, Samuel Beckett, Louise Glück, Jeanette Winterson, Cyril Wong, Jee Leong Koh, Carol Ann Duffy, and Barthes.

And of course, there’s Pooja Nansi who in a way exceeds them all, because she was really the one who showed me that it was okay to love reading to the point of madness, to the point of writing myself.

As for why poetry: I more or less fell into that particular genre. Initially it was about stamina. Starting out, I just didn’t have the stamina to write a novel (even a short story was a struggle) and I saw poetry as less demanding in comparison. That was naive of me! Later I realized that poetry requires a different kind of stamina, which has to do with an unrelenting intensity that’s not meant to be sustained. I am thinking here of a meteor; you want to end the poem before it hits the ground and burns out.

Again, I turn to Barthes for the better way of saying: a poem that works for me is whatever makes me go, “That’s it!” I recognize something in that poem: a sense of loneliness, for instance, or an unsettling desire for Alan Davies.

The prose poems in your book titled with the Roman numerals I. to IX. in between other poems seem like section markers and also like a continuous prose poem. What was the process of structuring your manuscript like?

It’s my first collection so I really had very little sense of what I was doing, in terms of structuring the manuscript. I generally relied on my gut instincts! I wrote the prose poems as a single piece, but the narrative it describes serves as a backdrop for the entire collection, so it made sense to break that piece up and spread it throughout. I hoped that having it this way made it easier for the reader to navigate the poems.

The siblings (I am assuming) across the collection come together in a house that’s physically breaking down as they also witness neighbors and family relationships on the decline as well: “Cup lids, the chair in the study, my parents’ marriage, camera lenses, people.” Early on in the book, the speaker also writes: “Nothing embraces you better than your body. It will find ways to uncurl and stretch, though not always, and less likely with time, to the sky. We learnt to be content with air.” Does the book hold this belief through to the end?

They aren’t meant to be siblings, no, not in the strict sense of the word. Just voices with the same base note of loneliness.

I think that at the end of the last piece, with the speaker leaving home, there is a sense of No, I am not content with air. I want more. I want to swallow the ocean, I want to put a mountain in my back pocket, I want to love. The tension here is between an innate demand for grandeur of experience and the practical limits of reality. That’s why nothing embraces you better than your body: this body that tires, grows old, and decays is also the same body that houses a working imagination and a beating heart, and that generates your desire for more.

I wouldn’t say that the collection moves toward optimism, but rather toward a more nuanced attempt at understanding what it means to be human.

What are you working on now, and what’s next for your work?

I’ve started writing again so there might be a second poetry collection in the works. Because I’ve been based outside Singapore for the past couple of years, my recent writing revolves around this task of forging a life, a personal meaning away from the familiar structures of home and family. I suppose what I am trying to do now is fashion a vocabulary of loneliness.