Home
»
Critical Essays
»
We Were Strike and Instrument Both: Music and Queerness in Edinburgh 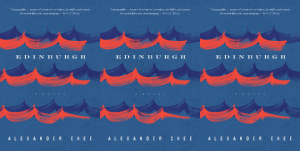 In the opening chapter of Alexander Chee’s debut novel, Edinburgh, Aphias Zee (Fee) auditions for a coveted spot in the Pine State Boys Chorus. As he sings, light streams from a stained glass window in the church. It paints the room in bold, vivid colors, and he thinks, “When I sing, I feel that I am like the wall is now. This is why I have come.” This telling statement about a body-turned-rainbow becomes an important touchstone for the book: how music defines young queerness. By utilizing song as a discovery space for the body, Chee gives insight into how Fee understands his sexuality. Music becomes a deeper question of community and belonging. Through this careful examination of the young queer body as part of a larger collective, we gather insight into something tender and difficult—a fragility that even Fee can’t immediately understand. Music becomes the conduit through which queerness is expressed. It allows readers to understand the intricate, confusing action of coming out.

Understanding your own queerness is an incremental process, a thousand tiny moments leading to a pinnacle; it is a knowing without knowing. Accompanied by puberty, this process is an extremely physical experience. It’s not only discovering your body, it’s discovering bodies around you. It is a different way of seeing. Chee writes with authority about Fee’s sexuality, allowing these self-discoveries to happen in tandem with musical experiences. Vocalization becomes the lens through which we see the body struggle to perform queerness. It is a way of understanding the self by taking control:

As my voice follows the scales while we warm up and we align our voices around the piano’s tone like muscles on a bone, I feel larger. As if the room belonged to the voices that filled it in the way my throat belongs to my voice.

This physical action allows the voice to become flesh, a thing that can be flexed, trained, and strictly controlled. When Fee sings, he gains a deeper understanding of who he is; more importantly, it gives him a way to understand himself in conjunction with other queer bodies. In one section, Fee describes his voice as he takes on a difficult solo, noting that the song fits his particular range “like a sleeve of words.” Chee writes masterfully about this kind of “fitting in,” about positioning the body for music, within the space of the choir. The body becomes part of the larger collective. It is a way of conforming in order to belong:

How to stand for hours without fainting under the hot lights, and sing: breathe from the diaphragm, tilt the head forward slightly to project sound from the throat out through the forehead, keep the knees bent slightly; feet under your shoulders, and the fingers of your hands rest on your thighs, your pointer finger pointed at your foot, along the seam of your slacks.

Chee pairs this musical preparation of the body alongside descriptions of tentative sexual discovery. Fee recognizes moments of intimacy when he interacts with his peers, but does not necessarily understand how it instructs his burgeoning sexuality or impacts his life. He focuses on the wet slickness of another boy’s partially opened mouth, ready for a kiss; he feels confusion as he wrestles with a boy on a couch, unsure if he wants to strike at the body or caress it. This process is anxiety-ridden. It is terror and ecstasy at once. By pairing connections between intimate bodies alongside musical descriptions, Chee provides deeper insight into how Fee comes to understand his sexuality:

As I sing, it feels suddenly airless, as if in taking his breath, Peter has swept the atmosphere clean away. We hit the air repeatedly with the chords in our throats and bellies, making our devotions. Peter opens his mouth. The first note pierces, the next goes inside the choir’s airborne array, and then he is there, a part of us, all our tangling voices skein the air and Peter slips up, born aloft. My jealousy scrapes off as he keeps breathing, keeps sending more air through himself. Slow fire.

When Fee interacts with Peter in the song, his longing is palpable. It’s not just Fee who hopes and wants and needs, but rather the “we” of the choir in the “airborne array.” Peter as a musical body slips up and through them, caressing the air with his bodied voice. It is a tender, important moment, but one that’s experienced out in the open, in front of everyone. In this way, Fee is able to experience intimacy with the boy he loves; he understands a part of himself and who he wants to be. Later in the book, as Fee looks back on singing and his time in the choir, he remembers what vocalizing was like and what it meant to his emotional process. His memories are bodied; he describes how he functioned alone and vulnerable, but also alongside the choir. The body becomes a collective:

When I was a boy and I sang, my voice felt to me like a leak sprung from a small and secret star hidden somewhere in my chest and whatever there was about me that was fragile disappeared. We learned, we were prisons for our voices […] We weren’t something struck to make a tone. We were strike and instrument both.

To be struck while simultaneously striking is a powerful image. There is violence implicit in it, but there is also the beauty of looking at the object while becoming the object. It presents the body as resonant—fulsome and whole. By utilizing music as a conduit for a young man’s journey through his sexuality, Chee sets up a beautiful dynamic between the physical and the emotional. Fee’s “small and secret star” opens to allow him access to a secret self. Music, an act of creation that allows for vulnerability, also provides him with strength and self-ownership. Fee’s fragility disappears when he sings. Inside the collective, he loses and finds himself again. He becomes part of the larger song. He is struck and striking both.