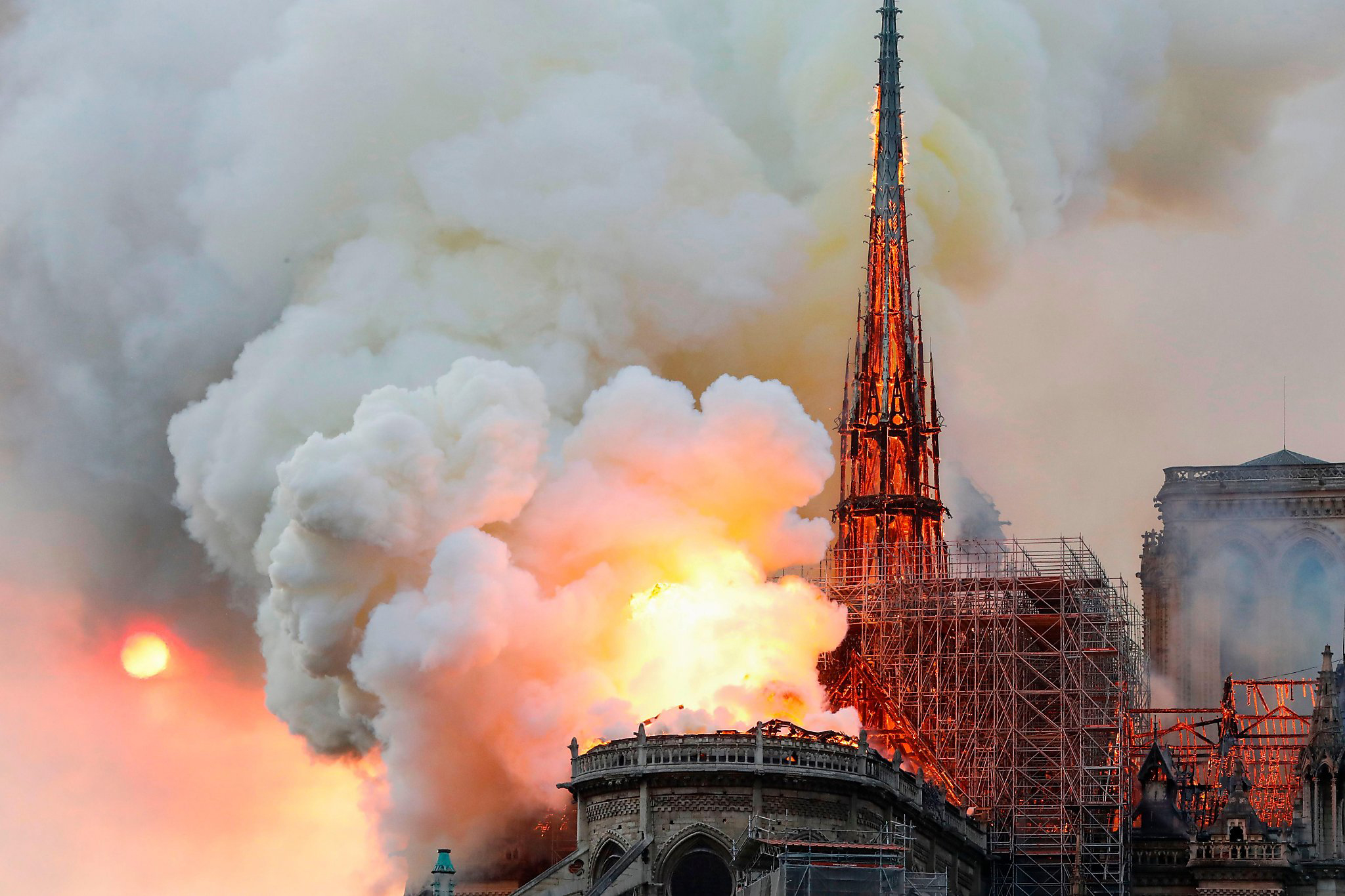 My sister’s dress waved as she stood, holding her iPhone over her head to search for reception, then fell as she sank into the folding chair beneath her. The loose black twill slipped over the metal, rippling like pond water.

We were all in black—cheap dresses purchased at Target a few days before. Now, after my mother’s funeral, beige foods pushed to the edges of the paper plate in front of me and an assortment of casseroles congealing in my stomach, I took in the video that was stuttering to life on my sister’s phone screen.

Folding tables filled my uncle’s basement; resting on them were solo cups filled with Jim Beam and Diet Coke momentarily without hands, the odd set of keys to someone’s truck, dieting aunts’ desserts abandoned five bites in. The low murmur of conversation was punctured by the occasional cry of “Shit!” as someone threw a boss in euchre.

And there on the screen, Notre Dame was burning.

This was the first sunny day in Northern Indiana in over a week, but the cold April air and the wet grass made for a chill. CBS played on a loop one clip of black smoke wafting through the cathedral’s exposed hatched beams. The Paris wind carried the fire higher and higher before finally, as if in a sigh of exhaustion, the spire fell.

People love to say, That’s just a coincidence. Those words try to pare down the event while simultaneously acknowledging—and brushing off—its meaning. Empty or not, the poetry of Notre Dame burning, the steeple falling—we watched it again and again.

And as I watched, heavy with the grief of losing my mother, I thought Good, or at least, That makes sense.

I spent the next months remaking my life, newly defined by being parentless. I had the odd sensation that, though I didn’t quite feel of the proper age, I had jumped the line. My childhood was squarely behind me and death would come for me next. Even upon returning to the place I lived, a thousand miles away from Indiana, I felt like I couldn’t quite put things back into place the way they had been before my mother’s death. Distance didn’t change anything.

It was autumn when I thought again about the cathedral—six months later, roughly. Time was counted differently now, split into before and after. I had taken my mother’s old watch to the jeweler to be repaired so I could keep track. It was October when a friend described what was lost when Notre Dame burned—reverberation and resonance that reached across the centuries. When it still stood intact, had you moved a single stone, the quality of sound made within would have changed. Its burning meant it could never be recreated as it was. The fire was a black line cut into time; now, sound rings out a little differently.

The past is never quiet, though. It tends to come back. Your own voice reaching you again from across a canyon or sometimes more like a shout in the night that startles you awake, gone before you’re certain it was ever there.

When I was a child I believed I saw a ghost stalking across my bedroom, drifting in black between my sister’s bed and mine. I barely slept the year I was in fourth grade and sang instead. I believed singing kept ghosts away. I’m not sure if I read this somewhere or it sprung into my head and took place alongside all the other superstitions and spells that catechism and Catholic mass instilled in me.

When I told my mother about the ghost, she asked me questions about its shape, its texture, its movement. She never told me what I saw wasn’t there or dismissed my experience as anything less than real. Her quiet, careful attention to my experience nurtured the writer in me.

The ghost that drifted into my childhood room and the onset of my sleepless nights came a few months after the death of my father. My mother brewed nightly mugs of Sleepytime Tea those days, and one night, as I perched on her bed, anxious about the spirits that awaited me, she said, “Do you think it’s your father?”

I said no, wishing it was the other way.

I’m not sure now if I saw the ghost or not. In my memory, its form is remade and dissolves as I try to put words to its height, its gait, or what it felt like to be both in my bed and on its path. It feels half invented. I try to conjure all this in the here and now, in a different bedroom where I sit typing, and I have to pause to listen, certain that I hear footsteps down the hallway.

But there is something certain here: the sharpness of a moment that is felt first, the action and the image coming second. My mother, one winter when I still lived at home, calling down the hallway to my sisters and me in an urgent whisper, Girls, come here! She stood in her nightgown in the darkness of her bedroom, the floodlights outside her window on, capturing the chaos of falling snow. No more than two feet away but oblivious on the other side of the glass, a doe stood plucking still-green leaves from the vine growing up the stone veneer.

Writing is like that. You realize you’ve bidden something, summoned it almost accidentally by working the words around it. The past returns, just for a little while. An echo finally reaching you across the years.

Against all my writerly inclinations to remember, the recording was at first an anecdote against forgetting, not it’s all that’s left.

When I play that tape, do I hear my dad? Or do I hear magnetic film spooled through plastic wheels that, in one moment, sensed his intrusion and recorded the pattern of his question? Hamburgers or cheeeeseburgers? This is what endures. Not the thing itself, but a shade of it; the sketch of a question that’s meaningless now. It’s not quite the voice of my dad, though it cuts the same shape when you go searching for him, a man gone now for 26 years.

Those five seconds of audio, the simple question of a father to his daughters, feel like a line in a movie I’ve seen a hundred times—tired for their use, but haunting just the same. They’re looped on the tape and in my mind, inescapable and giving rise to all the other feelings of having this enduring object but not the substance of the thing that makes it precious.

There is a closer link between sound and sensation than many of us realize. Some hauntings are thought to spring from soundwaves below 20 Hertz, below the range of hearing human ears. These sounds arrive at our bodies as something sensed instead of heard. Infrasound, also called “the fear frequency,” is thought to cause discomfort, dizziness, blurred vision, shortness of breath, and—in all its variety—fear.

Why wouldn’t it? Sound enters us, traveling to meet us through physical space and ringing through the most tender parts of our bodies. We’re instruments at the ready, receptive to the pitch of a room and the play of an environment. Sounds vibrate our bones and flesh—the eardrum, the skull. Perhaps every sense is pure embodied feeling, but does any sense reverberate quite like the words you’ve been waiting to hear? Or a hymn? Or bad news? A tape that conjures both my dad’s presence in the room and his absence from the world?

Writing has long been my way of insulating myself from the feeling of total loss—to never forget, to record it all, to put shape to experience with words, the best stand-in I can manage for the thing itself. But how can I inoculate myself against forgetting a sound, something that never stays long enough to be definite? Something that is always just passing through?

They say that in the right space, a space like a cathedral, that is designed for sound, you can build up so much resonance that the air is thick with it. It tingles on the skin and lingers long after the last note is played. We trust that something remains, even after we’ve forgotten the opening chords, even after the first sound has long decayed. The past is never quiet, but what’s here now is a reflection, an echo—not to be outrun, but simply to let ring out.