Home
»
Critical Essays
»
What Endures: 25 Years After the Onset of the Bosnian War 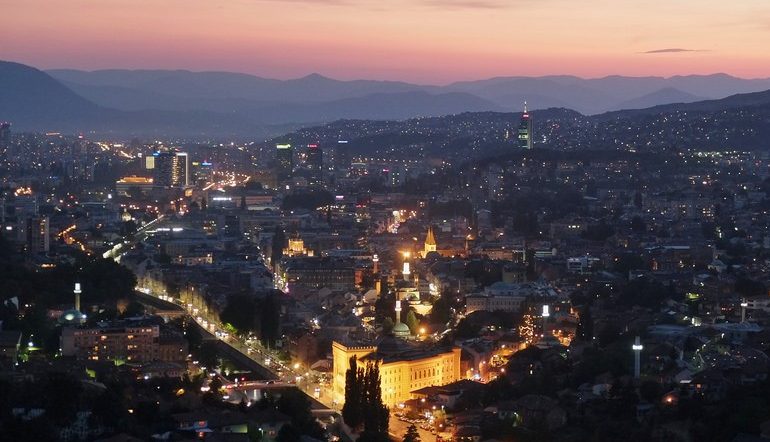 A few weeks ago, I stood on a hillside taking in the view of Sarajevo in the valley below me. Following the east-west outline of the Miljacka River, I could make out the old Ottoman quarter with its numerous shops and outdoor cafes, the grand Austro-Hungarian-style buildings lining the river banks, and shiny new towers rising alongside the canary-yellow Holiday Inn at the city center. To the west I could see neat rows of high-rises, and across the valley, the bubble-shaped television tower atop the hill where I once lived.

On that crisp October day when the city gleamed in sunlight and the sounds of church bells and the call to prayer mingled in the breeze along with a gentle rustling of leaves, it was difficult to imagine the hell that this city, and the country as a whole, endured not too long ago. The country lost more than 100,000 lives during the 1992-1996 conflict, and Sarajevo suffered under a siege for 1,425 days cut off from regular access to electricity, food, water, medicine, and the outside world. The spot where I stood on Mt. Trebevic was one of the sniper nests of the Bosnian Serbs under the command of Radovan Karadzic and Ratko Mladic. They launched an estimated average of 329 shells daily upon the civilian population, including on schools, hospitals, crowded markets and bread lines; on the worst day, more than 3,000 shells bombarded Sarajevo. Even now, the remnants of war are visible in the still-pockmarked buildings from bullets and mortar shells and in the array of white grave markers crowding fields and perimeters of the city.

Twenty-five years after the war began, the path toward recovery remains complicated and the idea of justice elusive. While many view the latest verdict out of the International Criminal Tribunal for the former Yugoslavia–finding Ratko Mladic guilty of 10 counts of genocide, war crimes, and crimes against humanity, and sentencing him to life in prison–as a step in the right direction, most Bosnians I know see these proceedings as too little, too late. Nationalist politics still reign, high unemployment persists, and the complex system of government set up by the Dayton Accord toward the end of the war remains dysfunctional. Opposing sides cannot agree to the facts of the war, or even when and how to commemorate national holidays; war criminals on one side are hailed as heroes by some on the other side.

Where leaders and the international community have failed, however, the people of Bosnia have found their own ways to reach toward a semblance of truth and reconciliation. Artists risked their lives to tell their stories during the war and continue to do so in this fragile peacetime. The Sarajevo War Theatre began during the first month of the siege of Sarajevo in 1992, advertising by word of mouth and performing by candlelight, and the first annual Sarajevo Film Festival began in 1995, powered by car batteries rigged to projectors. A group of artists known as TRIO produced iconic pop art images of the war inspired by punk culture to raise awareness of Bosnia’s plight. And in post-war years, sculptors and architects have worked to build bridges, public parks, and monuments that educate about the war and honor victims.

Writers have given voice to the Bosnian wartime experience as well. It was 12-year-old Zlata Filipovic who described so powerfully the view from her besieged neighborhood, in her since-published diary, that garnered international attention:

When I look through my shattered window, I see a completely different picture than when the window was in one piece… There are no trees; people have cut them down to survive through the winter. I see people who are lucky or maybe unlucky to stay alive. Everyone has been tortured, and many have become invalids without hands or legs. They are joined by the children, who in reality aren’t children anymore. Each has had his or her childhood stolen, and there can be no children without childhoods. They are now little big people. They recognize death and horror, and know that everything has been stolen from them […]

Journalist Zlatko Dizdarevic captured the madness of life under siege in his daily dispatches for the newspaper Oslobodenje, now collected in his book, Sarajevo: A War Journal. In a November 1992 entry, he wrote about the constant threat of sniper fire while crossing the street, highlighting the despair and resignation setting in: “More and more of us don’t feel like running across such streets anymore. We’re fed up with running, hiding, bending, taking cover.” Remarkably, despite repeated shelling of the newspaper’s offices and the deaths of many of his friends, Dizdarevic and his surviving colleagues managed to publish the newspaper daily during the war. Distributed by fax and couriers, posted on storefront facades, and read over radio airwaves, the dispatches served as a vital (and sometimes the only) means of communication throughout the city and beyond.

International journalists helped reveal the horrors of Bosnia to the outside world, and to great personal risk too; some lost their lives and many of them suffered personal injuries and long-term trauma from all they witnessed. Janine di Giovanni, although she would go on to cover other conflicts around the world, remained haunted by the images of Bosnia, among them the deprivation and cruelty of the Sarajevo siege. As she remembers during a return visit several years ago in this Granta piece:

It was a time of great darkness for the people. Inside the city, which was surrounded by mountains, there was no water, electricity, heating, petrol, food or comforts. Packs of hungry wild dogs roamed the streets, picking up pieces of human flesh. Hundreds, sometimes thousands of artillery shells fell on the once-beautiful city on the river, which was smashed to pieces, and evil snipers perched on hillside mounts, taking aim at women and children running across the street. The soft flesh of knees and thighs was particularly vulnerable: easier to hit.

Surgeons operated by candlelight, or with miners’ flashlights attached on their heads, and tried to keep their hands steady as the artillery rocked the foundation of the hospitals. People burned their books to keep warm and gathered twigs in the city parks. The elderly died in their beds, freezing to death, alone, clutching at dirty sheets.

There are many more deeply personal accounts of the war, such as The Bosnia List, Kenan Trebincevic’s stunning memoir of his family’s ordeal in the northern town of Brcko when Serb troops and paramilitaries tried to drive out or kill the non-Serb population. Journalist Barbara Demick chronicles the grim wartime realities of several Sarajevo families in Logavina Street: Life and Death in a Sarajevo Neighborhood. Yet others detail mass killings and rapes in Srebrenica, Foca, and beyond. As heart-wrenching and difficult to read as these accounts are, there is a healing in the telling for the survivors, as well as a crucial message to the rest of the world to never forget and to never allow these horrors to happen again.

One of my last stops during my recent visit to Sarajevo was to the newly renovated National Library, Vijecnica, where more than 2 million books and rare manuscripts burned in the war. The building’s columns and arches in distinctive Moorish architecture have been restored to their original glory, and an exhibit inside guides visitors through Bosnian history up through the 1990s. I also stopped at the War Childhood Museum, which opened in January and features recollections of children who grew up during the Bosnian war. I read and heard testimonies of hunger, fear, and longing for normalcy, and saw everyday items of wartime life on display: a makeshift oven, toys, rationed food, a pair of ballet shoes that the war rendered useless, and a bright blue “dress of spite” worn to defy the snipers taking aim in the streets. They were reminders of the humanity the survivors of Bosnia clung to despite all odds.

As I boarded my plane to leave Sarajevo once again, I could see the surrounding mountains in the distance dusted in snow; the start of a new season was in the air. This winter will bring the closing of ICTY, concluding one phase in the long process of trying to achieve justice for what happened in Bosnia. Twenty-five years after a descent into madness, and it seems reconciliation has only begun. My visit this time reminded me how much more there is left to recover after the war, how much suffering and hardship remain, and even how out of reach true justice might be. But there is also this: how the power in those voices young and old–and in the rebuilding of a majestic place to house their stories–endures.