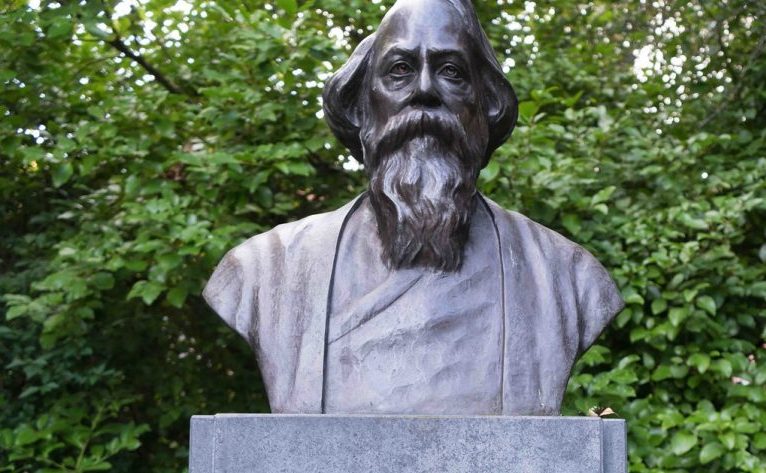 You could visit India and never hear the name Rabindranath Tagore. In fact, if you don’t live in India, you may well have never known Rabindranath Tagore existed. But this was not always the case: recipient of the Nobel Prize in Literature in 1913, Rabindranath Tagore became one of the major influences in the formation of the India we know today. All the while, he wasn’t identified as a politician, social leader, or revolutionary: he was a poet. Or, as his contemporary Gandhi noted, The Poet.

And Tagore didn’t write poetry only either: he wrote the national anthems for both India and Bengal, he composed plays, gave speeches, and, in his later life, took up painting. He frequently traveled to Europe and other parts of Asia to lecture; he met with Einstein. So why does his name no longer resonant, especially among younger Indian poets and artists?

When I was living in India last fall, I talked to professors, poets, artists, and booksellers looking for an answer to this question. Partially I was curious because Rabindranath Tagore is one of the few Indian poets known by people who primarily study English literature. But I also wanted to know why nearly everyone in India recognized who Rabindranath Tagore was (a poet, a painter, at the very least an important historical figure) and yet the interest stopped there. Literature and history professors from the University of Delhi to the University of Calcutta would admit that, yes, Tagore’s life and work merited a good deal of consideration but, personally, they weren’t very interested in his work. One such academic claimed: “Everyone has a copy of Gitanjali on their shelf if they fancy themselves an ‘intellectual.’ But very few could recite any of the songs.”

Tagore has become, then, a kind of symbol of Indian culture seen dispassionately. In Delhi and Jaipur, many told me to visit Calcutta, where Tagore was born and died, and specifically Santiniketan, a school Tagore founded that still flourishes in the arts. Taking the train into Santiniketan, a town lined with streetsellers hawking candy bars next to miniature portraits of “The Poet” up to the main stretch of the university, I thought that Tagore would be everywhere, ever present, that any person I talked to would have something to say, a song to recite, or even just a personal memory to share. Instead, I found that Tagore was the forgotten old founder: a person of great significance whose portrait could be found in almost every building, and yet no one would give a second glimpse at his brow wrinkled in serious thought, his beard filling the bottom of the frame. Tagore became, even in the institution he raised up, a part of the background, a symbol signifying a literary past no longer present. Students at Santiniketan would merely shrug their shoulders at the mention of Tagore, similar to how a student at George Washington University might react if someone arrived on campus eager to discuss the founding father.

Tagore remains everywhere: all bookshops carry at least one of his books, no serious professor of literature or poet has not studied him, and painters view his work with a certain regard that suggests Tagore might’ve been better to stick to writing poems. Yet his presence is only so present. At a library in Calcutta, a giant portrait of the poet greets every patron entering the building. And he stands there as a ghostly gatekeeper, inviting readers to explore the literature of India even if he knows that, in the process, his own status will fade.