Home
»
Critical Essays
»
What Is a Story Before It Becomes Words?: Lynda Barry’s What It Is 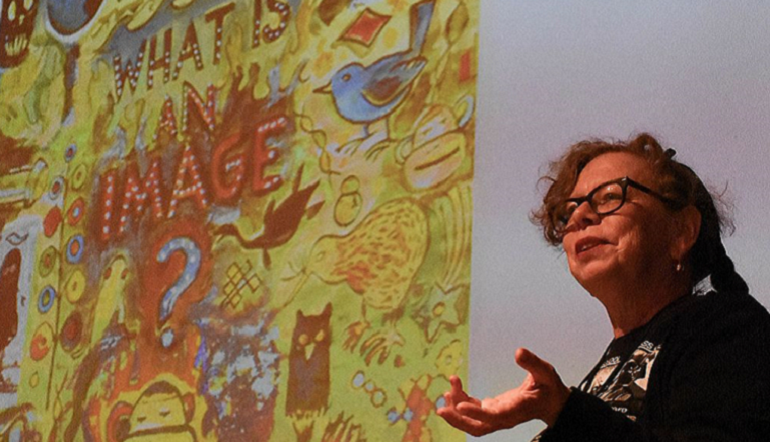 Among the pernicious myths about writing and creativity, the one that may hold the most sway over novices and experts alike is the disputable lie that writing cannot be taught. This myth is fluid, gaseous; it sloshes out of one conversation and into others, and versions of it boil up when we talk about MFA programs, genre, or whether the publishing industry ought to be more or less democratic, more or less accessible to (depending on your tastes) mavericks, egotists, genius outsiders, hyperprolific cranks. The argument persists because the tools of storytelling—language, music, pictures, play—are essentially universally accessible. Also universally accessible is the experience we’ve all had, at one time or another, of being forced to endure someone else’s mediocre shit.

So, if “writing” is an activity we can all do (and have done), if the idea of institutionalizing its instruction seems at best like snobbish gatekeeping or, at worst, a racket—if “anyone can do it,” but we nevertheless have all encountered art that has swept us away as well as art that has bored us, or infuriated us, or made us laugh when we weren’t supposed to—then it is only natural how many people assume that it indeed cannot be taught, or at least not in a classroom. Having agreed on this point, the camps now separate: some writers and readers proclaim a higher echelon of genius, a sort of literary frozen chosen; others argue for an authenticity that can only be found outside the staid canon.

Into this fray, enter Lynda Barry, whose challenging graphic novel What It Is approaches its tenth anniversary and remains one of the most original and instructive works about the creative process ever written (Barry also wrote two excellent follow-ups: Picture This and Syllabus). As both artist and writer, Barry’s an excellent choice for this particular sort of iconoclasm. She’s a lauded cult artist whose signature work, Ernie Pook’s Comeek, was launched with the help of her friend Matt Groening; she’s since written acclaimed illustrated novels like Cruddy.

What It Is is expressionistic and difficult. Before the techniques are imparted (and they are, eventually) Barry spends more than one hundred pages blending comic panels, short passages of autobiography, and gorgeous, bizarre full page collages that explore the fundamentals of craft and creativity. These collages, shaped around koan-like “essay questions” such as Is a dream autobiography or fiction? or Why are monsters in so many old stories? or Can an image exist without thinking? comprise the book’s visual center of gravity. Barry pieces her own art alongside excerpts from old letters or childhood primers, and the effect is poignant, unsettling, and exacting. “What happens if you cross,” reads a smeared scrap of paper on a page headed “To follow a wandering mind means having to get lost.” On another collage, centered around Barry’s statement “An image can pass through time intact,” an old group photo has been painted over with ghostly hues of indigo, royal blue, and black, and red cartoon eyes peer back from every figure.

This first half of What It Is isn’t meant to give answers, but to make the reader comfortable with ignorance and question-asking—even, I’m sure Barry wouldn’t object, to quarreling with the authority of any writer or artist, including Barry herself. The passages of autobiography are welcome islands of coherence and clarity, and the collages span a wide range of complexity: a few are simple enough to enjoy on their own merits (“What is playing? What are Toys?”), others are deeper but agreeably open-ended (“Why do we remember things we are trying to forget? Why do we forget things we want to remember?”). But a great many of the pieces, especially the stranger details and scraps that embroider the pages like marginalia, are deep dives into negative capability—the artistic virtue of confusion and uncertainty. It occurred to me in the middle of this section that I wasn’t even sure how Barry meant for me to read the book. Like a student who’d botched a homework assignment, at one point I asked myself—“Damn, was I supposed to be answering these questions as I go?” And how was I supposed to move through each page? Clockwise? Left to right? Top down, or center-outward? (The sense I had while reading became less of the “left to right” sensation of reading across a flat cartoon panel, and more of moving forward, through something that surrounded me.) Barry’s compilation is tediously long for this reason. It gives every reader time enough to let the nagging sense that we are doing something wrong fall away.

This sense of doing something wrong, Barry argues, is at the heart of writer’s block and self-doubt. “When did you first notice you were bad at something?” she asks. “And then what happened?” In her own autobiography, she recounts the classroom contests, the prizes, the insults, and the encroaching “rules” that transformed common childhood play into another academic discipline that one could get “right” or “wrong.” “By fifth grade, most of us knew it was already too late,” she laments. Ultimately, after the circuitous journey through her subconscious (and your own), Barry warns of the two questions that sap the joy out of writers and artists: “Is this good?” and “Does this suck?” The answer, she assures us, is “I don’t know.” Keep writing, keep drawing, and keep participating in the process.

This may seem like Barry is leading us down a path that has frustrated many novice writers seeking concrete advice. Is she joining those ranks of well-meaning instructors who argue, helpfully but uselessly, that nothing more than healthy self-esteem is needed to churn out whatever pieces of art are waiting to be born inside of you? Fortunately, the answer is no. Barry delivers what few others have accomplished: honest-to-God practical techniques that can be used by anyone, in any genre. In line with her conviction that imagination is linked to memory (think David Hume), she walks her readers, step by step, through infinitely repeatable exercises that use nouns and verbs to revisit vivid memories and use their vitality to create “images” (Barry uses the word to mean uniquely emotive creative experiences that are more than description but not quite a scene). There are no rules or conventions, and there is no “right” or “wrong”—but there is very disciplined note-taking and meditative practice that goes above and beyond the stage of insipid encouragement that is where many similar works end. As Barry herself has said, of the techniques she learned from her professor Marilyn Frasca: “The lessons I learned from her when I was nineteen or twenty, I still use every day and have never been able to wear out.”

Barry insists that we scrap our notion of “art” as the finished product itself—in both What It Is and its follow up, Syllabus, she describes this inert thing (painting or novel or film), lovely though it may be, as merely the “side-effect” or “by-product” of a process: the dirty dishes after the splendid meal, the footprints on the ground after the dance. For the creator, the pleasure comes from participation, regardless of whether it is documented or how it is shared. Barry actively encourages us to “waste” time and materials, all the better to unlearn our ingrained attitudes of “waste.” She quotes the social philosopher Mary Parker Follett: “The activity of creating is all. It is only by being this activity that we grasp it.”

Tags:Lynda Barry, What It Is