Home
»
Reading
»
What Is It About the Literature of War? 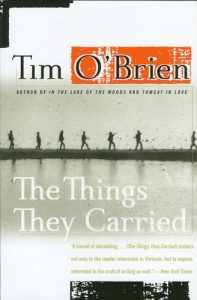 Up until that short story workshop I took my junior year of college, my TBR pile was made up of a bizarre mix of Stephen King, Barbara Kingsolver, and Bill Bryson. Then my professor passed around photocopied packets containing stories by Lorrie Moore, Grace Paley, and Tim O’Brien, and I realized there was more to life than homicidal clowns and humor writing.

“The Things They Carried,” a staple in college classrooms across the country, started me in on a love affair with O’Brien’s work. It wasn’t necessarily the subject matter that appealed to me. I had never before been interested in historical fiction in any form. Rather, it was the beauty and artistry with which he strung his words together. That coupled with his quiet, quirky sense of humor.

Heck, I enjoyed July, July (a novel set at a high school reunion, having absolutely nothing to do with war) almost as much as I enjoyed Going After Cacciato.

But then his books became a gateway to other war literature. Catch-22. All Quiet on the Western Front. The Thin Red Line.

I ate them all up.

But what was it about these books?

Looking back, it seems that they echoed my own, ambivalent feelings about war. The authors of these books cast a critical eye on America’s military history, but also simultaneously humanized those who were in the thick of it. And they did it with a sense of humor that was not overt, but which nevertheless broke the tension and added a sense of levity in the midst of obvious gravity.

Because of this bit of humor, no matter how grounded in reality I knew these books to be, they felt like classics to me. Far removed from my own experience not only in place but also in time. Pieces of art I enjoyed more than pieces of cultural commentary. Accounts of events that had happened at a point that felt impossibly far away.

But now there is a new crop of war literature, written by those who have seen combat in Iraq and Afghanistan. And something about these newcomers to the literary landscape makes me feel squeamish in a way I never felt before.

Kevin Powers’s The Yellow Birds follows two young privates trying to stay alive in Al Tafar, Iraq. David Abrams’s Fobbit, perhaps the Catch-22 of our time, is a satire set on a military base in an active war zone. Ben Fountain’s Billy Lynn’s Long Halftime Walk focuses in on a single stop in the heroic Bravo Squad’s media tour before they head back into combat. The Matt Gallagher–edited Fire and Forget is an anthology of stories by military veterans. Marine veteran Phil Klay’s Redeployment is a short story collection inspired by his own experiences in Iraq. And on the nonfiction side of things, Jon Krakauer’s Where Men Win Glory (published back in 2008) explores how Pat Tillman’s death was used as a symbol of American heroism.

In much the same way my previous reads did, these books cast a critical eye on our military activity, while also drawing readers intimately close to the inner landscape of those who have lived through the experience. Still, something feels different. While I felt far removed from the war literature I began reading back in college, reading the books and stories for pleasure more than anything else, these works are more immediate, breathing down my neck, forcing me to face things head on. As I recline in bed late in the evening, flipping through pages or pressing forward on my e-reader, they whisper to me.

This, they say. This is what has happened. Is still happening.

This is proof that we’ve learned nothing.

This is what people are experiencing while you loll about in your air conditioned home office, wearing yoga pants and cat slippers, they say. People you know. People you love.

As I read these books, I think of my cousins. Two of my cousins—brothers—have each served several tours in Iraq and Afghanistan. Their little sister, just starting her third year at West Point, is about to commit the next seven years of her life to the army. Seeing her brothers flinch at firecrackers and struggle with post-combat life makes me want something different for her. A life that’s safer. A life more like my own.

But I can’t presume to know what the right choices are. All I can do is read the latest additions war literature and try to better understand.