Home
»
Uncategorized
»
What Is Your Ideal Space to Create? 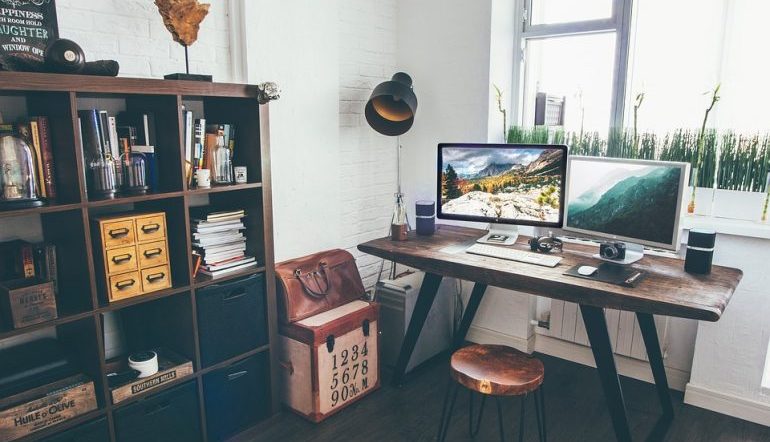 This is the first year since I started teaching at SUNY-Fredonia–nine years ago now–that I didn’t leave my house to go on a writing retreat (awarded or self-imposed). I have an office at home painted my favorite shade of robin’s-egg blue with red accents and it houses almost all of my poetry and non-fiction books in one space. In winters, it’s the warmest room in the house, as it is right above the furnace, and in summers, all I need is to crack open the windows for a bit of breezy peony perfume. Pine trees shade this side of the house so even on the few truly hot days of Western NY where even strawberries seem to melt into the ground, not even a box fan is needed–there’s always the faintest of breeze, enough to have me still use the almost-all-but-extinct paperweight on my desk when I work.
During the school year, I know I won’t want to be too far away from my infant child when I do write, so my husband and I have lined up two stellar former students to come over and give us the gift of two to three hours a day where we can hole up away in our respective offices while we scratch out a few lines or pages of a story. Just knowing I could walk down the hall if I need to (or if my baby needs me) is all the assurance and confidence I need to balance those heady first months with a newborn.
Since we already had a room designated and decorated as a nursery from my elder son, I spent much of my pregnancy putting together my “room of one’s own”–especially since I found out I will be the only woman in a house of boys and a man. It was important for me to have a space I could call mine and close the door if and when I need to, but also to have it as an open space where my boys could wander in and find drawerfuls of paper and markers (and M&Ms if they are lucky!) and browse the bookshelves I have full of writers of all colors and genders.
I want them to have a space where they could eventually retreat to and get lost. As Virginia Woolf notes in her famous essay, “Life for both sexes–and I look at them, shouldering their way along the pavement–is arduous, difficult, a perpetual struggle. It calls for gigantic courage and strength. More than anything, perhaps, creatures of illusion that we are, it calls for confidence in oneself.”
My favorite space to write has a glass-topped table with my Grandfather’s old typewriter that still works. It’s the very typewriter that he used to write pithy but meticulous observations about life in his small town in India to his American granddaughter since she was just five years old and never stopped until his death when I was a junior in high school.
How I loved to spy the blue and red envelopes or thin blue aerogrammes in the day’s stack of mail–I knew there would be a whole world of pineapple thieves and cobra catchers detailed and waiting just for me inside. I write longhand in a spiral journal first, then transfer it to my iMac days or weeks later, after I have had time to tumble those words around a bit longer in my head. There’s a postcard of Marion MacDowell (of the famed and much-appreciated MacDowell Colony that has given me a beautiful workspace in the New Hampshire woods twice now) “watching over me,” as my friend put it, as if she is also helping to protect my space. Also of note is a picture of one of the whale sharks I swam with during my sabbatical in Atlanta, a shadowy force to be reckoned with.

I often laugh with my parents when we wonder how on earth I ever became a writer–we did go to libraries often, there was no limit on how many times my tired and exhausted parents would drive us there, even after a twelve-or-more-hour shift at the hospital–but there was hardly any paper in the house. The “literature” left on bookshelves low enough for my sister and me to reach and read consisted of various Physician’s Desk References or such dazzlingly intriguing titles such as Visual Manuel of Skin Diseases, Diagnostic and Statistical Manual of Mental Disorders, or The Pill Book. And sometimes, if we were lucky, my dad would bring home some Reader’s Digests or the occasional outdated and waxy National Geographic for us girls.

Aimee Nezhukumatathil is the author of three collections of poetry, most recently, LUCKY FISH (Tupelo Press). A recipient of a fellowship from the NEA and the Pushcart Prize, she is associate professor of English at SUNY-Fredonia.