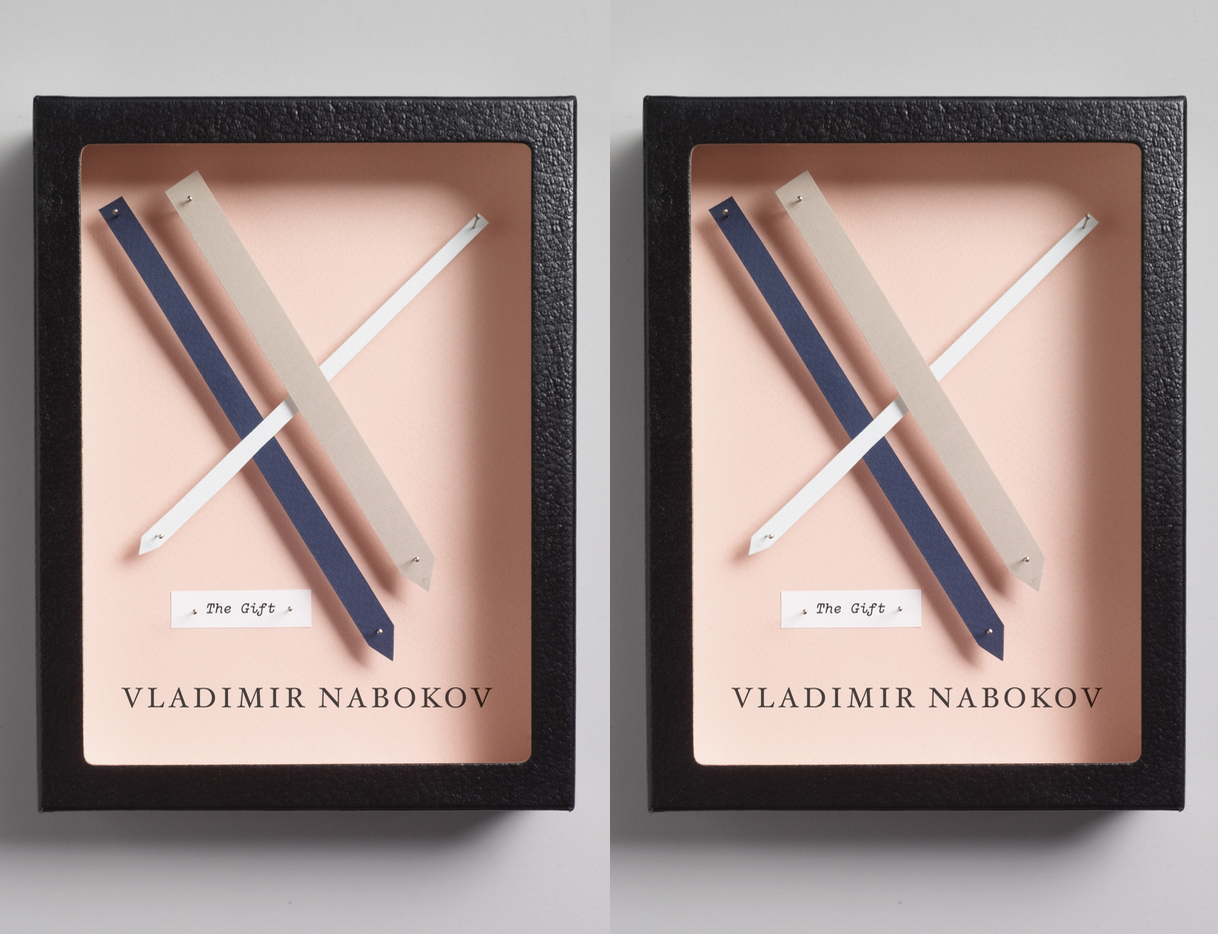 Vladimir Nabokov wrote English prose so piercing and pristine that we now ask ourselves if it was even ethical for him to write Lolita the way he did, with sentences that dazzled. It bears remembering then that English was not his native language, that he claimed to feel hemmed in by it in fact. “My private tragedy,” he wrote, “which cannot, indeed should not, be anybody’s concern, is that I had to abandon my natural idiom, my untrammeled, rich, and infinitely docile Russian tongue for a second-rate brand of English.”

Having read Nabokov in both English and Russian, I would hesitate to use the words “infinitely docile” to describe anything written or uttered by the acerbic Nabokov, who when pressed to say something kind about Ernest Hemingway could only muster “the description of the iridescent fish and rhythmic urination in his famous fish story is superb.” But Nabokov had in fact “abandoned” his mother tongue and with it his prolific career as a Russian language novelist. Between 1926 and 1938, Nabokov completed nine novels and novellas in Russian, including the one he held in highest regard, his Kafkaesque tale Invitation to a Beheading (1935). Nabokov’s works were banned in the Soviet Union, and the Russian speaking diaspora in Western Europe was small and limited in its tastes. To find new readers, Nabokov had to turn to the English language, an idiom that would connect him to readers (and paying publishers) in America and England.

But it was not just the Russian language that Nabokov left behind: above all, he had to give up the warm familiarity of cultural shorthand and the common referents he shared with his Russian readers. His English, he complained, “was devoid of any of those apparatuses” he enjoyed in Russian, “the implied associations and traditions—which the native illusionist, frat-tails flying, can magically use to transcend the heritage in his own way.” Perhaps it’s unsurprising then that his last novel published in Russian, 1938’s The Gift, has been described by scholars and critics as the writer’s “farewell” to the Russian language. The Gift, arguably Nabokov’s most personal novel, is at once a compendium of references to the great Russian writers of the nineteenth century as well as a heartbreaking meditation on what it means to say goodbye to a language.

Nabokov was born in 1899 into an aristocratic family in Saint Petersburg who fled shortly after the Russian Revolution. By 1920, they settled in Berlin where a thriving enclave of Russian emigres had taken shape. Nabokov, having lost his tremendous wealth in the revolution, lived modestly (he at one point made extra money by giving boxing lessons). He also began to make a considerable name for himself as a writer, publishing in expat journals under the pseudonym Vladimir Sirin. It was this chapter of his life, and the world of Russian speaking literati living in Berlin, that served as the setting for The Gift. The novel follows Fyodor Godunov-Cherdyntsev, a young Russian émigré writer living in Berlin who feels he is destined to write a great novel one day, a sense all the more edified when his first collection of poems, titled simply Poems, is well-reviewed. In this way, Nabokov differed sharply from his novel’s hero; when the acclaimed Russian poet, Zinaida Gippius read some of Nabokov’s early poems, she told Nabokov’s father: “Please tell your son he will never, never be a writer.”

“[The Gift] is the last novel I wrote, or ever shall write, in Russian,” Nabokov stated in the foreword to the novel’s 1952 English edition, adding that the novel’s heroine “is not Zina” (referring to Fyodor’s love interest Zina Mertz) “but Russian literature.” Indeed, the novel is filled with references and obvious borrowings from the great Russian writers of the nineteenth century, especially Alexander Pushkin and Nikolai Gogol. The novel is also filled with keys: people losing keys, taking the wrong keys, reminding others to return keys. Their role in the story comes into sharp focus when Fyodor writes his mother in Paris and tells her that he is able to bear life away from Russia because he has taken with him “the keys to her.” Keys become for Nabokov a way of thinking through the ways we hold onto the places (and languages) we have left behind. This becomes especially poignant by the end of The Gift, as we read pages that we know will be Nabokov’s last in his native tongue, when Fyodor, having lost his keys, is locked out of his apartment.

Nabokov is part of a class of writers who work outside their native languages. “Exophonic” writers, as they are increasingly being called, are motivated to adopt new idioms for a myriad of reasons, some political, some primal. Yoko Tawada, author of Memoirs of a Polar Bear (2011), writes in both her native Japanese and in German (a language she began learning at age 22) as a way to resist easy narratives about minority writers. When one of the polar bears in her novel, a “native” speaker of Russian, wants to publish her memoirs in German, her publisher is exasperated, worrying it will complicate the image of her as an “ethnic minority” writer. Then there is Jhumpa Lahiri, who grew up speaking English and Bengali, who is now publishing in Italian, an experience she wrote about in her 2016 book, In Other Words as being born out of sheer irrational compulsion: “I don’t have a real need to know this language. I don’t live in Italy, I don’t have Italian friends. I have only the desire. Yet ultimately a desire is nothing but a crazy need.” Some like Nigerian writer Chinua Achebe, who wrote his 1958 novel Things Fall Apart in English (and not in his native Igbo) did so to mark the experience of life under British colonialism. Facing critiques from other postcolonial writers, Achebe responded, acknowledging certain contradictions but insisting that English united Nigerians with other commonwealth countries. In his essay “The African Writer and the English Language” (1965), he wrote: “Is it right that a man should abandon his mother tongue for someone else’s? It looks like a dreadful betrayal and produces a guilty feeling. But, for me, there is no other choice. I have been given this language and I intend to use it.”

The exophonic writer Nabokov is most often compared to was his rival, the Polish author Józef Teodor Konrad Korzeniowski, or as he is better known to English audiences, Joseph Conrad. Two Slavic writers who ended up writing English better than many of their native-speaker contemporaries, it was irresistible for critics to draw parallels. Nabokov resented the comparison, telling Playboy magazine, “I cannot abide Conrad’s souvenir-shop style, and bottled ships and shell necklaces of romanticist clichés.”

I first read The Gift as a freshman in college in a class on twentieth-century Russian literature. Except for vodka, everything about Russia was completely new to me then. And so it was odd to be saying hello to a literature and language while reading Nabokov as he wished it all farewell. Just as Fyodor was being locked out, I suddenly was being guided in. I wondered then whether or not language is just that: a set of keys we all exchange. As I was getting the key to a new country, a new culture, a new alphabet, someone else had misplaced theirs, finding their Russian disappearing, feeling less familiar, growing rusty beyond repair.

I was perhaps not far off in my theory. When Nabokov returned years later to translate Lolita into Russian, he found himself exasperated and locked out anew:

“Alas that ‘marvelous Russian language’ that I thought had awaited me somewhere, blossoming like a faithful springtime behind a tightly locked gate whose key I had kept safe for so many years, proved to be nonexistent, and beyond the gate are nothing but charred stumps and the hopeless autumnal vista, and the key in my hand is more like a jimmy.”