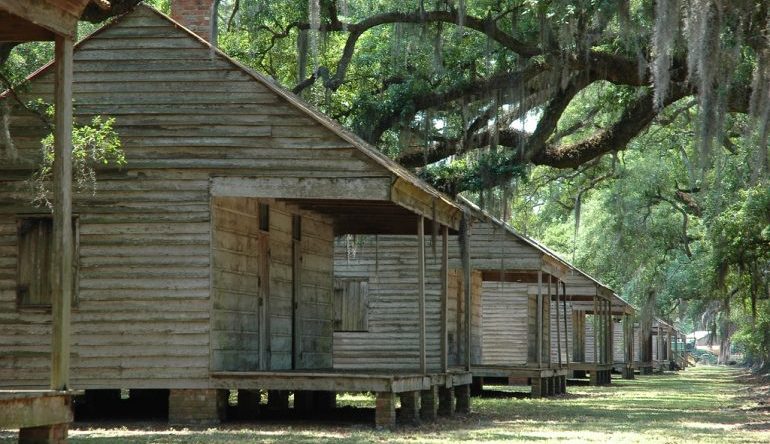 Angela Flournoy’s short story “The Miss April Houses,” published by Tin House, focuses on a committee that is in charge of determining the language displayed at a set of historical buildings on a college campus. The buildings, which were used as slave quarters, are named after Miss April, a woman born in one of the buildings in 1902. The committee is tasked with determining how the college acknowledges its history with slavery, and the conclusion appears quickly: they won’t.

The story is told through two perspectives: the official language of the committee’s documents and a woman of color who is a member of the committee. These voices are distinct—the committee writes in stilted legalese, while the first-person narrator is direct and to the point—but both perspectives have one thing in common: they leave part of the truth unsaid. Sometimes silence is more powerful than words, and Flournoy uses this device deliberately throughout the story. It’s the moments where it’s clear that both narrators are leaving out critical information that bring the most attention to the issues at hand.

The committee member is new to campus, the town, and the state; she’s still getting used to her new surroundings when she is asked to join the committee. It was explained to her that the committee needed a librarian, but she intuits: “That wasn’t the only reason I was there, I suspected, but it was a fancier job than I’d had before and fancy jobs always have their particular requirements.” The narrator then moves on without answering the question brought up in the reader’s mind. What is the other reason? The reader is left wondering what the committee’s ulterior motives are until the oldest tenured black professor becomes sick and must quit the committee. He is replaced by Nnamdi Watson, a visiting lecturer in African American studies who has been at the college for eight years, to which the narrator says, “Nnamdi was there to keep our number at a respectable two, we both figured.” Tokenism is the answer to the reader’s question, the word not being said.

The committee’s tendency to talk around the truth is present from the very beginning of the story. In the introduction, we learn that it has a recommendation on using certain words: “In literature associated with the property, prior occupants of the ‘Miss April Houses’ should be referred to as ‘people’ or ‘inhabitants.’” In special cases, the passage goes on, these people can be called “workers,” but they cannot be referred to in any other way. One can infer, then, that the committee is deliberating avoiding other language. And Flournoy soon reveals what word has been erased—“slave”—when a community member submits a petition stating that the houses’ historical markers should include information about the transatlantic slave trade (the majority of the committee votes that such language is outside the goals of the restoration project). In trying to distance themselves from any mention of slavery, Flournoy makes clear that the absence of words can be as destructive as words themselves. By not including the word “slave” in the historical documentation relating to the college’s campus, part of the stories of Miss April and the other slaves who lived in those quarters are erased.