Home
»
Book Reviews
»
Poetry
»
When (And Why) A Poem Goes Viral 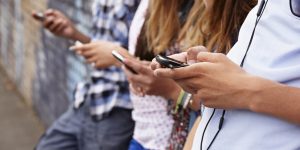 Why is everyone posting poetry?

Poets don’t expect to be famous. We may fantasize about it of course—what if Terrance Hayes were to appear on Jimmy Fallon or Ada Limón had her own reality show? What if NBC televised the Poetry Society of America award ceremonies? What if John Ashbery and W. S. Merwin had a hip YouTube channel with more followers than Justin Bieber?

While I’m not convinced many poets actually want celebrity or fame, I do think it is fair to say that poets want readers. We imagine the far-flung bottle of our poems washing up on more than an isolated shore. Increasingly, many poets also hope that in some way our work can become part of a larger conversation. A couple of years ago, Juan Vidal lamented the fact that American poets were not taking on cultural issues, were not making poetry a site of civic engagement. In my response to Vidal, I argued that American poets are and have been on the front lines of political inquiry and social commentary but that poetry, at least in the United States, has not always been taken seriously as a venue for such discourse. However, in the last few months, we’ve seen poems do important cultural work that suggests the tide might be changing. I don’t think any of us are expecting a call from Oprah, but non-poets and non-writers seem to be looking to poetry to communicate ideas, emotions, solutions, lament, anger, and solace not available elsewhere.

When Matthew Olzman’s “Letter Beginning with Two Lines by Czeslaw Milosz,” appeared on the Academy of American Poets’ Poem-A-Day site in early January, it rippled. A thoughtful, insightful, and personal letter in response to escalating American gun violence, Olzman’s poem distilled the complexities of our collective emotions and somehow gave them voice. Everyone was sharing it, and everyone was talking about it, as Gabrielle Calvocoressi correctly notes in a post on Facebook from that day: “I feel like today is a day when a poem became an event. Walking around I kept hearing students, faculty, people asking, ‘Have you read Matthew Olzmann’s poem?’ I can’t remember the last time a poem moved off social media and just into the urgent non-virtual lives and breath of everybody. . . A poem as an event. . . A poem that devastates people on such an intimate level they have to tell someone.” Gaby’s claim that the poem was an event rings true to me. Poems are great at capturing the internal world, but we don’t often look to them to capture the external world. And though the poem is not reportage, the poem is a report, a missive, a communiqué, on the complicated Venn diagram of internal and external.

More recently, Maggie Smith’s “Good Bones” went bonkers (within minutes it seemed) after it was published in the online journal Waxwing on June 15, three days after the Orlando massacre at the Pulse nightclub. Smith’s engaging sonnet+ touches on the delicate issues of parenting, fear, hope, the world’s dangers, and the possibility of making everything a little better. People around the world were posting, sharing, tweeting, reprinting, and even translating it. I have to say, I’ve never seen a poem spread so fast, so ferociously, and so far. Most miraculous of all—almost immediately it went up on the Poetry Foundation Website, officially solidifying its street cred as poetry not just as a phenomenon. Google the poem and stories return with headlines like “Read this viral poem and try not to cry.” So popular is the poem that Tupelo Press actually made an advance announcement that they would be doing a broadside of the poem.

When is the last time you heard about a broadside in advance?

There are also scores of interviews with Smith about her reaction to the viralness of the poem, as though everyone knows a poem is precisely the thing that should not go viral. But then again, the recent meme a la William Carlos Williams’s “This Is Just To Say,” suggests otherwise.

So, what makes these sent and resent, posted and re-posted poems unique?

As it turns out, they do have a number of things in common. First, both come on the heels of violent tragedies. Neither are elegies exactly but both are elegiac. Second, both poems foreground children, which, for better or worse, raises the sentiment stakes. There is something about the future at work in these poems, a fear not just for this generation but also for the next. Third, both are accessible. The tone of each poem is spot on. Smith’s is actually a little humorous as well. That combination of the wry and the dark is hard to execute but here, it is perfectly done. And because Olzman frames his poem as a letter, it feels particularly relevant—as though it wants—it needs—to communicate. It has an audience. It is written to someone. Maybe, like, you, for instance, or me.

Lastly, these strike a chord because they are good poems in their own right—their appearance overlaps with an event that made their messages particularly salient at a specific moment, but any reader knows she or he can revisit this poem later and still find it resonant.

The popularity of these poems is not only great for Olzman and Smith but great for poetry. Perhaps they remind readers that poetry is an appropriate form for giving voice to public grief. Poems are secular prayers.

I was thinking about this as I watched Lin-Manuel Miranda read his sonnet at the Tony Awards, a poem that also took off. I kept wondering why he chose not just a poem but a sonnet to express horror and hope. I think it goes back to poetry not being popular, to it not being commercial. A poem sanctifies an emotion; it solemnifies a moment. It lifts.

Poetry makes everything less common, more reverent. And in times of the world’s night, we need—even just a little—the holy.