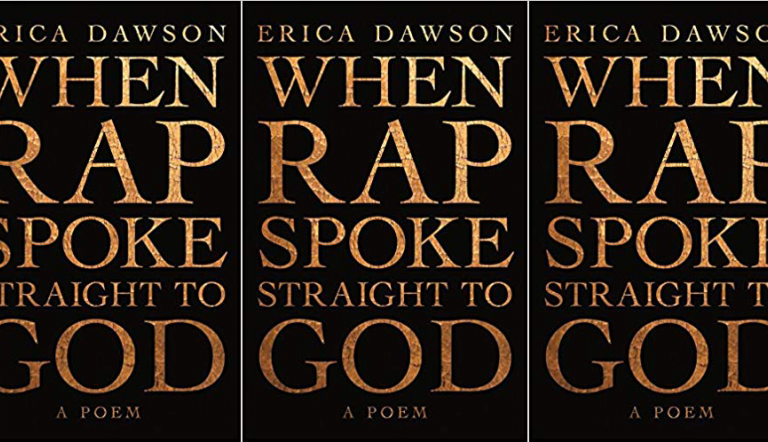 Dreamlike, polyphonic, multivoiced, sacred, and profane—Erica Dawson’s book-length poem When Rap Spoke Straight to God encapsulates the multifaceted presence of black womanhood in America. In a book that feels both lyrically reminiscent of the past’s formal poetry and distinctly of this moment, Dawson reclaims the black female body through a layered chorus of allusions and voices ancient and modern. The lyric turns of phrase—one minute sounding as if intoned from a pulpit, the next from a dazzlingly lit stage or from a bedroom at night, the narrator exhorting herself or whispering to a lover—beg to be read aloud, and, like an ancient tapestry, the poem holds many hidden meanings woven into its tight brocade.

From the beginning, the poem reads like a reclamation. “Hallelujah,” the second page begins. “I’m ready / to go searching for that mysterious dark.” One of the many motifs entwined in Dawson’s poem is the subversion of the traditional trope that portrays white as positive and black as negative. The subversion of this trope is essential to the multivoiced narrator’s act of seizing back the black body from violence and oppression.

Toward the end, the phrase “I see the exodus of light” is repeated three times, close to the line “Let there / be black never absorbing white.” The departure of the light comes with a feeling of release, and the announcement of blackness with triumph. So, the “mysterious dark” the narrator sets off seeking can have many meanings; but in the overall context of the poem, it is positive, and it can be read as a metaphor for self-discovery and as a declaration of strength, personhood, and rights.

However, the black body cannot be separated from the female one in the reading of this poem. Readers must view it from an intersectional lens—regarding the impact on the narrative voices of the white gaze, the male gaze, and the gaze of the self—in order to fully experience the poem’s nuances.

Dawson introduces the concept of the body as a possible adversary early in the poem. “I was only half of thirty / when my body had its way with me,” she writes. The choice of the age of fifteen marks this line as a metaphor for puberty and all the baggage that comes with it, especially for women. When women develop secondary sex characteristics (and even sometimes before), their bodies come into public possession, available to be rated, criticized, and controlled.

At times, Dawson addresses the narrative voices’ relationship to the body obliquely, metaphorically. Other times, she lets the gritty anger of the present political moment flow freely:

What if I let my body testify
even after learning that some select
people can say grab them by the pussy?        I,
With my rights and privileges, there, undo and elect
to sew my labia closed, using a butterfly
loop and Pantone’s Black 7 thread. It’s then
I’m most colored.

Beyond the most obvious part of this passage—we all know who said “grab them by the pussy”—there is a lot to unpack here. The narrator wants to send a message with her body, a body which, as a black woman, is already doubly weighted by the expectations of womanhood and by traumas past and present. But what is that message? The sewing of a labia shut is a closing of a door: nothing gets in, nothing comes out. This act of bodily mutilation is an abdication from what many of the “grab them by the pussy” side believe is the holiest function of womanhood: to take in and create new life.

Dawson personifies rap many times in the poem, including, of course, in the title. In this particular stanza, it is especially loaded with meaning. “Rap” possibly acts as a stand-in for black America, crying out, loud against the “dirt” that has deafened (hence the inner ear metaphor) America against the brutality of its own history.

The many voices of When Rap Spoke Straight to God echo the myriad stories of black America: art and struggle, past and present—and future. Consider the following:

and rap remembers
its recurring dream—the swim to Africa
where disembodied voices yell, There’s no
room for a hiraeth in your bones. But in
marrow, there’s substance, healing, narrow passage.

Hiraeth is a Welsh word that doesn’t have a direct translation in English but means something akin to a combination of longing, yearning, and homesickness. In this stanza, Africa tells black America as rap that there is no room for homesickness. However, there is healing in the act of being, “in / marrow, there’s substance,” and as Dawson’s potent lyric tells us, reclaiming the physical black, female body is an act of rebellion itself.