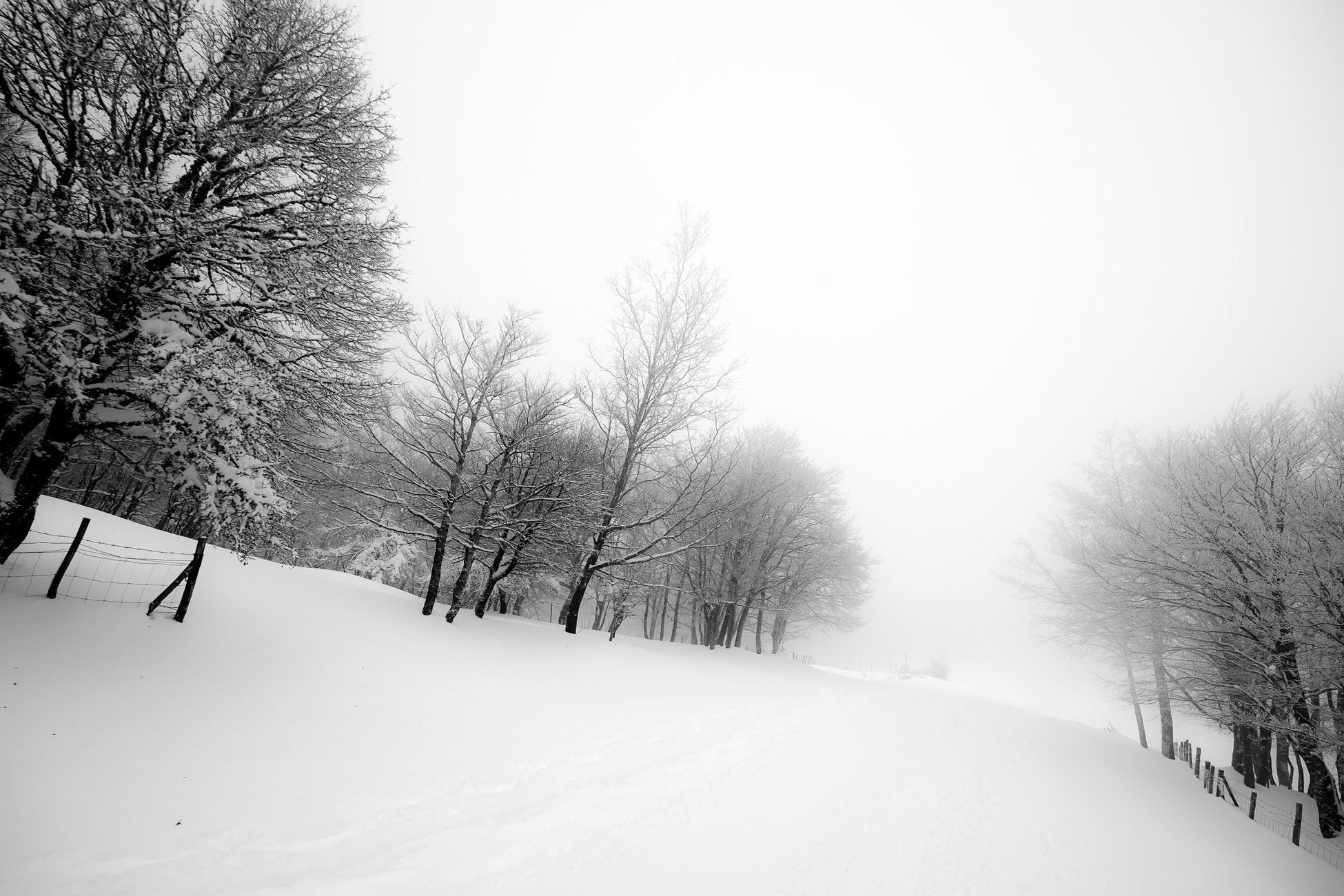 It’s snowing again, and the world contracts, like my heel’s screws in the cold. The sky and ground reflect one another, white-gray, and the space between the two becomes more tangible, more intimate in the precipitation’s revelation of how far it has to go. In the distance, the mountain is a white whisper in a loud room. Even as the world seems smaller, it enlarges into a horizon-swallowing plain, connected through its erasure, and the white-out re-founds my imagination on mysteries, the world’s unknowns, a bewildering unfamiliarity, excluding particulars and the contemporary moment. Gaston Bachelard called winter “the oldest of seasons,” and my instincts for warmth, for meat and cream, and for the soul-spinning reflection my doctor charted as SAD feel like they belong to pre-history, witnessed ever by the winter-thriving black-green conifers, the mosses, and the lichen, some of our planet’s oldest flora. Last year, driving to work one morning, I looked up at the roadside embankment, a forested hill, the background and foreground tangled, confused with tree branches. My eyes struggled to focus, and I saw what looked, through a sun-spurred squint, like a poem laid out horizontally: wet, black trunks against snow. For an instant, as I drove the empty black road looking out the driver’s side window, it felt like I was “reading” the shape of a poem, line by line.

I interrogated this impression for some time, rolling it over and over like a sphere eddied under a waterfall. I knew there was a deeper connection between the tree trunks in the snow and poetry than just their analogous shape, something related to poetry’s capabilities for scale and scope. Many poets talk about the “architecture” of a poem, that is its shape, how its been built on the page—what it looks like. Less frequently, I’ve heard the act of formatting the poem called “landscaping,” which sounds to me more like planting pollinator-friendly perennials than moving mountains, the latter of which is more akin to my feeling of finding the right form of a poem. Once, at a writers’ conference, I asked my workshop to draft a poem on a poster board instead of using their usual drafting medium. All participants, including myself, found that they wrote differently when they wrote in large handwriting, on a larger space. As I wrote, the page seemed like an avalanche I had to dig the poem out of. I found myself writing more abstractly, like an aerial view that allows one to see the crop circles. The poem that resulted, called “Scar,” takes on the very literal and tangible scar on my right cheek and allows it to be more—meaningful, abstract, figurative—than it is: “Sometimes it’s / bigger than my / body…as if I’m // a frame for / it, as if it / continues beyond // my end.”

When I’m writing in my little leather-bound writing journal or on a word processor, my poems tend toward more concrete details and language. They connect to the tactile, the minutiae of the subject matter as my hands connect to the page or the keyboard. When I compose aloud, as I often do when I’m on long car trips or walking the dog in our local arboretum, my poems become much more rhetorical and musical. They argue. They speech the poem. My ear listens. When I composed on a large poster board, my poem zoomed out, used its wide angle lens, lost its gravitational orbit on the literal. For me, at least, the composition medium holds great sway over the content’s scale and scope.

For years now, I’ve been obsessed and concerned with the medium of my engagement with the news, with tragic events. Does seeing a photo of obliterated Aleppo on my cell phone miniaturize my concern? If I watch a video of a police officer shooting an unarmed black man on a Facebook thread, does the medium in any way lessen or diminish my capacity for empathy and witness? These questions have also led me to interrogate whether “staying informed” can sometimes become an act of consumption; how one can not only watch but witness; and how a poem can approach its subject matter without diminishing its importance through the scale of its art.

Short poems run the risk of miniaturizing their content, thereby simplifying the dramatic situations and lessening their reader’s emotional impact. In the “Miniature” section of On Longing, Susan Stewart writes:

In writing, description must serve the function of context. The locus of speech and action must be ‘filled in’ for the reader, who suffers from the exteriority of print; the distance between situation of reading and the situation of the depiction is bridged by description, the use of a field of familiar signs. What disappears in writing is the body and what the body knows—the visual, tactile, and aural knowledge of lived experience.  . . . the reader is not in either world [that in which one experiences the text and that in which the text takes place], but rather moves between them, and thereby moves between varieties of partial and transcendent vision. Situation within situation, world within world—there is a vacillation between the text as microcosm and the situation of the reader as microcosm.

It’s perhaps not too far off to suggest that all poems are miniatures of their dramatic situation, a kind of tableau or diorama of the real or imagined situation which they portray; the reader, then, makes sense of the miniaturized situation by imaginatively enlarging the action and images to a pretense of 1:1 scale. The problem, of course, is that all of this takes place in the mind of the reader, caught in the purgatory between the microcosm of the text and the microcosm of the reading situation. The body, perhaps, fails to actively experience the situation and, instead, only reacts, if it does at all, to imagined experiences cobbled-together from lived memories and projected semblances.

So how does a poem engage the body directly, so that the poem’s concerns are as large as bodily experience? First, sound must appeal to the body’s sympathetic faculties, and, as Stewart suggests, description must “fill in” the reader’s experience, but perhaps lacking from Stewart’s argument is the consideration of the page and the poem’s use of it. In much the same way that my content changes when I change how I use—or don’t use—the page in the drafting process, the way a poem uses the poetic page also gives the reader a sense of scale and scope of the poem, how much of an investment to make in the poem’s experience.

I’ve long admired the work of Dana Levin, especially in how she mitigates the scale and scope of her poems’ content with the scale and scope of the poems’ forms. Two poems from Levin’s new collection Banana Palace demonstrate two different, even opposite, approaches to using the page to encourage the reader to see consequence in the poem and to engineer depth. “Fortune Cookie” is composed of two lines, and it’s a poem mimicking another form—the small forecast on a slip of paper instead a wonton-shaped cookie.

For the inexpert poet, a two-line poem surrounded by an almost-blank page might seem to suggest that a reader should have a low engagement with the poem, that it requires little effort—little empathy and imagination—to experience it. Instead, the intimacy of the second-person “You” as the first word of the poem, its pretense of specificity, and the ending of the first line on “death” automatically situates the reader as a crash-test dummy in the showboating of existential crises. For the non-terminal living, death is always plural—it’s a shape-shifter. As a reader, that death in my system boggarts into all its likely—and, if my dread is as strong as hooch that day, all its remote—forms. The white space on this page allows room for that scope, that scale of the reader’s projected authorship. “Fortune Cookie” is a small poem with a large scale.

In “By the Waters of Lethe,” a longer poem, Levin allows the page to cameo forms of what the speaker wants to forget—the body gone to age, the blood to vinegar, the world to disaster. She wants to get out of the body, to abstract soul from the “meat / suit.” Here’s the opening of the poem: 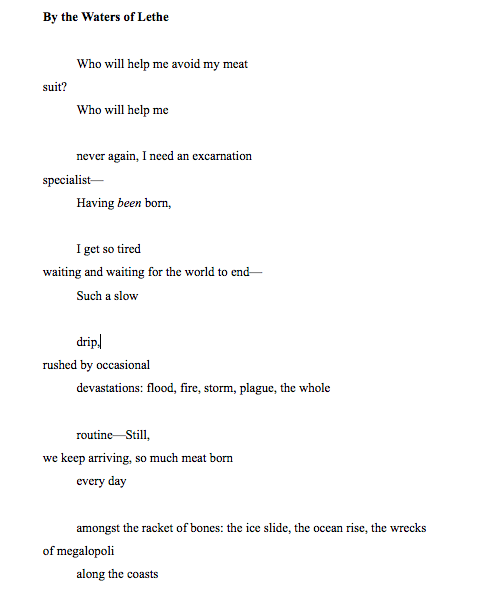 The white space of the page acts like letterpress leading, those blank pieces of lead that go between the raised letters—the white space supports, scaffolds, even cushions the text, revealing its form and its shape. In this way, the format reminds me of a kind of unzipping, a stepping out of, a lens’s long exposure showing us the movement of long-gone light. In this way, the poem’s scale is one of focus—this image, then this image, then this—and its scope is one that allows for an anachronistic now, for all of these things to happen at once in the poem.

“Fortune Cookie,” then, allows the white space to mimic the scale and scope of the poem, whereas “By the Waters of Lethe” uses white space to delineate that scale and scope—a small distinction, but one that could have a major effect on the ambience of the poem and, therefore, the reader’s ability to sympathetically engage in the imaginative act of realizing the poem. All that being said, Stewart points out the problems with any kind of 1:1 scale of the scale of the poem and scale of the poem’s content. “[L]anguage can imitate only language,” she writes. “[D]epiction and representation of the physical world in language are matters of concealed suture” that maintain “the fiction of linguistic representation.” Every poem, then, is a loose translation of experience, and every act of reading is a suspension of disbelief, an engagement of fiction, the willed ignorance of the sutures that hold the world of the poem and the world of the reader together; the page, a snow that reveals only what it cannot bury.