Home
»
Critical Essays
»
Whitman and Dickinson and the Civil War 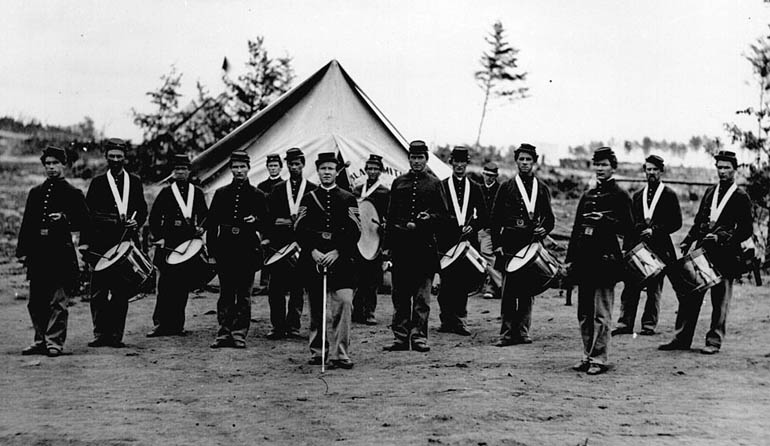 Contemporary American poetry was born in the context of the Civil War, the war that claimed more Americans than ever before or since. Whitman and Dickinson, two of America’s seminal poets, were alive and writing poetry during the Civil War. Their work has had lasting relevance outside of that context, as somehow, learning to read Whitman and Dickinson doesn’t require knowledge of the Civil War. Of course, if their work were only specific to their historical climate, it would not have resonated beyond its time and place, and ultimately helped to shape the voices of American poetry.

Whitman was already a well-known writer, an anti-slavery, pro-Union journalist, at the outset of the war. When he received news that his younger brother was injured in battle in Fredricksburg, Virginia, he left home to find him. He found his brother safe and healthy, only superficially wounded, but after seeing the hospitals that tended to soldiers Whitman was compelled to stay and volunteer. During the course of the war Whitman visited soldiers in hospitals frequently, writing letters home for them, playing cards, and offering some companionship. Whitman recorded his encounters with soldiers in “Specimen Days,” and there are multitudes of references to the war throughout his body of work, including many very obviously socially and even patriotically motivated words, as in the final stanza of “Beat! Beat! Drums!”:

Beat! beat! drums!—blow! bugles! blow!
Make no parley—stop for no expostulation,
Mind not the timid—mind not the weeper or prayer,
Mind not the old man beseeching the young man,
Let not the child’s voice be heard, nor the mother’s entreaties,
Make even the trestles to shake the dead where they lie awaiting the hearses,
So strong you thump O terrible drums—so loud you bugles blow.

The famously reclusive Dickinson did not interact with the world around her the way Whitman did, yet half of her surviving body of work was written during the Civil War. Whether or not Dickinson largely internalized the war and used it as a metaphor for her own conflicts or wrote explicitly about it seems less important than acknowledging the larger context for the originality of her voice. Dickinson’s work seems mostly concerned with how we might internalize war. One of Dickinson’s more well-known poems about the war opens: “lt feels a shame to be Alive —/ When Men so brave — are dead —” drawing a question clearly around the value of life and death in war.

Dickinson’s brother paid five hundred dollars to have someone enlist as a substitute, her father was a known abolitionist, and she referenced the war in many of her letters. Even someone like Dickinson, so famously sequestered, did not avoid the war. Dickinson, master of the interiority of imagination, describes the psyche of a nation as the sum of its divided populations, “Do we deserve — a Thing —/ That lives — like Dollars — must be piled / Before we may obtain?” When Dickinson’s poems contain a response to the war, there’s less patriotism and more moral conflict. In her humanistic way, Dickinson wonders what virtues, after all of this death, are still virtues?

Between 600,000 and 700,00 soldiers died during the Civil War. If you project that number onto the current population of the United States it would be something like six to seven million casualties. Disease was by far the most common cause of death. The infrastructure of our society during the Civil War could not handle the carnage. Every family and every community was affected.

One in three or four Confederate soldiers died in the war, and one in nine or ten Union soldiers died. There was no system in place to identify the dead: there were no dog tags. Undertakers followed the troops, and while officers were often sent home in caskets, soldiers who lost their lives were interred beneath hasty markings in makeshift cemeteries near to where they fell. After the battle of Gettysburg, residents carried bottles of peppermint oil to help alleviate the stench of the corpses of men and horses rotting in the July heat. The realities of daily life during the Civil War and its aftermath are hard to imagine, yet somehow easy to overlook when approaching literature from that era.

The losses sustained from 1861 to 1865 impacted our society in ways we have not seen since. It’s not surprising that the human response to such devastation included not just advances in medicine and technology, and new ideas of society and nationhood, but also formative literature.

I’ve seen it written and heard it said that American poetry stems in two directions, from Whitman and Dickinson, but when the historical narrative is set behind Whitman and Dickinson’s work there is so much more to gain, not just as part of the canon, but as a small piece, just two voices, set within a world we are still trying to understand.