Home
»
Interviews
»
Whose America? A Conversation with Hanif Willis-Abdurraqib on poetry after Trump 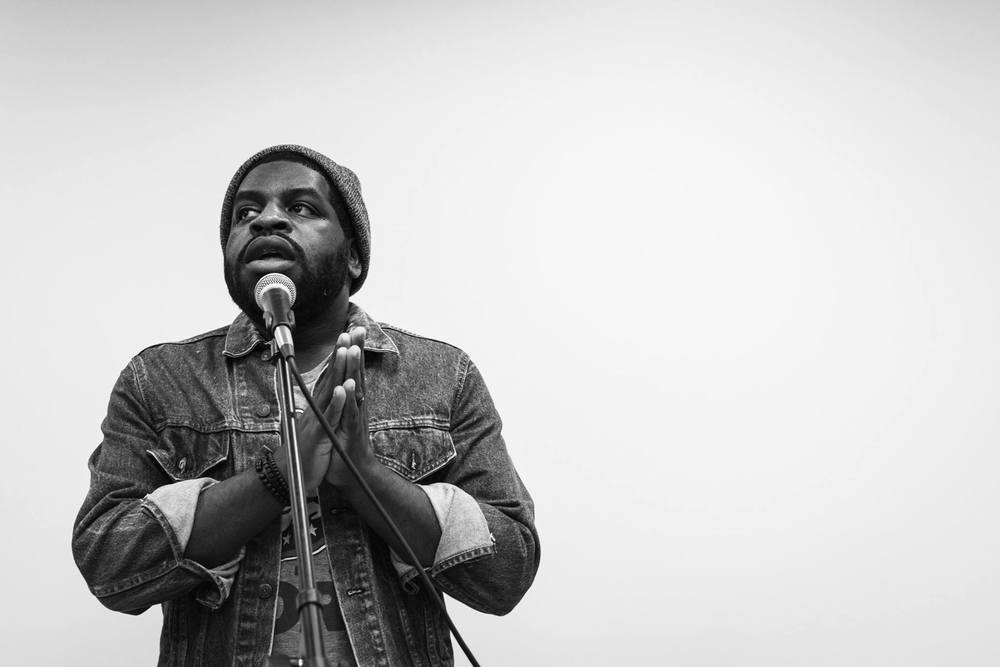 In the two weeks since Donald Trump’s election, people from around the country, and from all walks of life, have been debating each other online. How exactly did Trump get elected? Everyone’s got a theory. Those who caught Tom Hanks in the role of a Trump supporter on Saturday Night Live’s rendition of “Black Jeopardy” caught, if not exactly a theory on Trump’s election, a series of surprisingly acute insights into the overlapping interests of seemingly opposed demographics of the national voting body: Trump supporters and black people.

In the sketch, Hanks’ character, “Doug” stuns the other Black Jeopardy contestants, “Keeley” (Sasheer Zamata) and “Shanice” (Leslie Jones), and even the show’s host, “Darnell Hayes” played by Kenan Thompson, with his correct answers. “Skinny women can do this for you,” says Darnell Hayes, reading off a question from the “Big Girls” category. Given in typical Jeopardy question-format, Doug’s response, “What is: not a goddamn thing” sends the audience into cheers while the show host laughs and nods in affirmation. But the contestants’ newfound camaraderie ends when the final Jeopardy category comes up on screen: “Lives That Matter.” Darnell can’t help himself giggling while Doug stands paralyzed with fear.

Poet Hanif Willis-Abdurraqib tells me about this SNL sketch during a recent conversation, while addressing whether or not there exists a singular America and who will tell the stories of the people he grew up with if he doesn’t. Willis Abdurraqib’s book, The Crown Ain’t Worth Much speaks to the concerns of the writer’s loved ones and those beloved to them. “It’s about the generational violence of gentrification and those who suffered from it,” he explains. “What is it like for me to, in my writing, build a utopia where people I love can live and never have their homes torn down?”

Anaïs Duplan: I read your essay on why we needed Marvin Gaye on the day after the election. In light of this election, I’ve been thinking about fear and optimism—how they interact with each other and whether we can use music or poetry to help us.

Hanif Willis-Abdurraqib: That essay was about reflecting on old music that has set a path to this kind of thing already. Some of us, we’ve been writing into this feeling for years. We’ve been writing into these anxieties and fears for a long time. My call to people is to think about how they’ve been engaging with the art that’s [already] existed and think about changing that engagement going forward.

AD: I had a conversation with a group of poets recently. We were talking about how we might get, for a while, a lot of bad art. You can’t write an elegy immediately after a death because you’re so full of loss and maybe aren’t as critical as you need to be of yourself. I’m still trying to articulate to myself exactly what the use of bad art is, though I do think it is useful. Do you have a sense of what we can use bad art for?

HWA: There are levels to that. Do I have use for art that is harmful or so problematic that it incites danger? No, I don’t really believe in the use of that art. But art that is aspiring for something and failing, I have great use for. To see an unpolished version of something, especially done by a young person, is thrilling and reminds to me to get back to the work.

AD: Part of the work must be to find spaces to uphold that kind of work. I’m wondering if, on a national scale, there is a place for Black and POC voices to work in that unfinished, unpolished way?

HWA: I don’t think there are nearly enough. A lot of times, as artists of color, or artists from marginalized communities, we have to be twice as good and the burden that puts on us is that there’s less of an emphasis on presenting unfinished, unpolished versions of work outside of an immediate circle. I love a space that is present for our failures and holds us up just as high as our successes. […] If art will shift in any way in the next year, couple years, four years, I think it will be in the urgency with which we present it. When it feels like everything can be taken from you at any point, you have to create a living archive as rapidly as possible.

AD: There’s this anthemic quality that a lot of your poems have—and this is very cheesy that I’m saying this—in the way that, say, a guitar solo surges forward. There’s this building-up and trying to reach back to the urgency or immediacy of the moment.

HWA:  I grew up in the intersection of hip-hop and punk. There’s something about punk songs that try to get as much done in as little time as possible. It’s all rooted in how quickly you can either build to a moment or decelerate from a moment.

AD:  Something that surprises me about the way that you’re able to do that is that there isn’t ever really a moment when that feels like too much to ask.

HWA: There are some poems [in The Crown Ain’t Worth Much] that meditate and slowly attempt to draw out a feeling, but the majority of the book is very much—a reader knows something’s coming at all times. It’s like in a horror film when the music starts playing, and a character is watching the door handle, waiting for it to turn. That’s the emotional urgency I felt when I was writing the book.

AD: You enter into a contract with the poems. You make that easy for us. You make that inviting and alluring, in the way that the pop ballad does, so that you don’t really mind the intense emotionality of it.

HWA: I’m in a place where I’m interested in writing about the joy after the wreckage. I wrote a book that zeroed in on what can be torn down, and I’m interested in poems that do a type of rebuilding now. The Crown Ain’t Worth Much has joy involved in it but when I pick the bones, when I strip down to the bones of it, it’s about the generational violence of gentrification and those who suffered from it. Now I’m wondering what it’s like to write a utopia that can never be torn down. What is it like for me to, in my writing, build a utopia where people I love can live and never have their homes torn down? What is it like if I create a space that is impenetrable by any other empire?

HWA: There was recently that Saturday Night Live sketch where they have Tom Hanks play a Trump supporter. The whole joke was that black people and Trump supporters have things in common, like they don’t trust the government and the type of food they might like, but when it came to “Do black lives matter—yes or no?” that’s where we diverge. The singular America that Bruce Springsteen presents is an interesting one because it’s rooted in all these things that I can connect to, due to my upbringing as a poor black person in America and [that] poor white people can also connect to and middle class people. This triumph over struggle through this idea of labor that is romanticized and worshiped. I refuse to believe in a singular America outside of the musical spaces that I can romanticize because I know too well what’s happening outside, or even in the minds of some of the people there. The rhetoric that Trump ran on was narrowing the vision of America to fit people who never really see black people as human or marginalized people as human. That’s the narrative that they want to live in. That’s the narrative that they were told they were of, by the generations that have come up before them. When you narrow that scope, then there’s only one America. Then it becomes one single America and it’s the one you feel like you’re entitled to and why are these people who don’t look like me telling me I can’t have it again? For me, that’s not the move. […] And this isn’t me saying we need unity with people who don’t see us as human, but I’m saying that for those who wish to resist, everyone has a role to play. It’s going to require turning to our people and finding out what that role is. If we can turn to our people and say, “What do you need?” and then take that knowledge back to our corners of the world, I think that is where the work starts for me.

AD: I totally agree that we have to ask what the movement needs but I wonder where the answers come from. Can you say more about that?

HWA: Let’s keep it real, at least for me, I cannot be an accomplice or ally or whatever to people who don’t identify as I am if I don’t know or actively love people who don’t identify as I am. I can’t be out here like, I’m going to hold men accountable in my life and advocate for women if I don’t really love women or I don’t really love folks from queer communities or trans communities. If you love these people, you have turn to them and ask what they need and then go back to the movement with that knowledge. People who are not able-bodied have needs, undocumented people have needs, indigenous communities have needs—and their needs are all varied, depending on where they live, depending on what accesses they have or don’t. There are people facing different levels of violence and we can’t forget.