Home
»
Uncategorized
»
Why I Reread Lithium for Medea 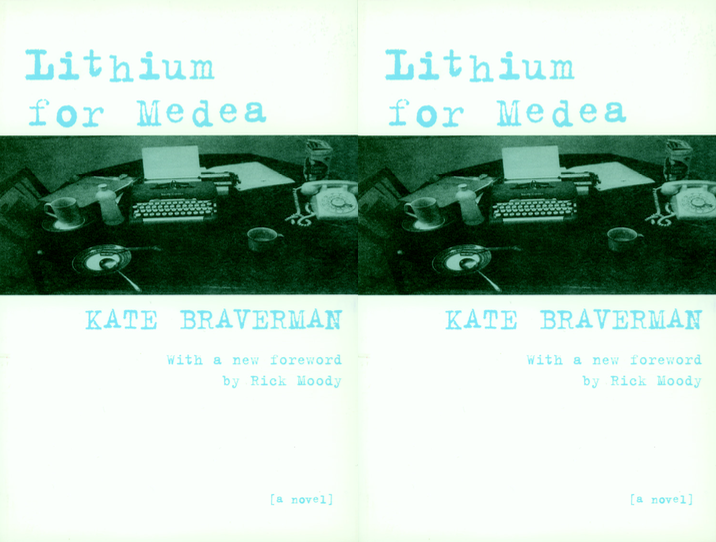 I came to Kate Braverman through her story “Tall Tales from the Mekong Delta,” which appears in the collection Squandering the Blue and was chosen for the Best American Short Stories in 1991. In 1991 I was still in college, which is to say a tiny, evangelical college in a tiny, Protestant evangelical town in rural Kentucky. Same town in which I was raised. At that time I’d never been to Los Angeles, never lived on the West Coast, never written any stories of my own, never met any Jews, even, except the Jews for Jesus who came through and put on a show at the Methodist church.

“Tall Tales” seemed like it had the power to transport me to a world where…women lived on their own in apartments, for example (that modest dream!). Interacted with men their families hadn’t met. Used language in an incantatory, non-Protestant way. Protestants are famous for plain-spoken practicality. They ousted all that nonsense iconography. All those paintings. Images of God? Offensive detractions from his unimaginable reality. (But you should have seen our hand-lettered felt banners on Easter Sunday!)

Braverman, as she will let you know if you meet her, is impossible to pigeonhole. A lot of her contemporaries are minimalists, and she is their joyful opposite. Hyperactive, hot with fever, brilliant.  To say I admire her language, her use of language, isn’t quite right. I rarely find myself praising the “use of language” which so often means, lately, the decorated sentence that emerges from many an MFA program—the clever simile, the detail nailed so accurately and self-consciously that it calls attention away from the story and character. I’m old fashioned.

But theorists talk about the seduction of the text, and seduced is how I feel when Braverman’s language is operating on me. I try to maintain my native crabbiness with languagy-writers but instead I feel completely taken in. Perhaps other readers resist a paragraph like this:

I married him in Las Vegas, two days after we shared a mescaline picnic in a Colorado blizzard. We climbed partway up a hill blanketed by new soft snow before the drug overwhelmed us and we collapsed laughing on the cold white ground. Snow fell like arrows shooting down, like meteors, gorged flowers, mandalas with mirror eyes. Our laughter shook the stiff mountainside. Our footprints were like craters in the snow.

But I don’t resist it (and it doesn’t let up, ever). Maybe because I don’t feel, through the words, Braverman trying to be a good writer. I don’t feel any obedience, any subscription, to anything outside her own sensibility. I feel a mescaline high and the attendant sharpened attention and the hopeful new love remembered in light of its miserable outcome.

Braverman writes about drugs a lot, and memory, and family, and loss. She is an emotional writer. At one time, I would have said, aren’t we all? But we all aren’t. And, as noted, I am a cranky reader, and maybe, like a good Protestant, I need a reason for all the intensity of language, all the revelry in its precision. A narrator on drugs definitely provides a… reason for language virtuosity, but the interior lives of Braverman’s characters—their intelligence, their willing vulnerability, their throbbing edges—absolutely demands it.

Jean Rhys. She may be a little like Jean Rhys—beautiful, brave, and dirty. Too smart for this world, too strange for commerce, but love-driven and stuck here all the same.

I did meet Kate Braverman years ago at a party in El Cerrito. She called me the next day and invited me to her house for dinner. And told me I could be beautiful if I lost the last ten pounds. And gave me a signed copy of Lithium for Medea, the only book I had been giving away over and over for 10 years, 20 now, to friends, colleagues and certain heartbreaking students.