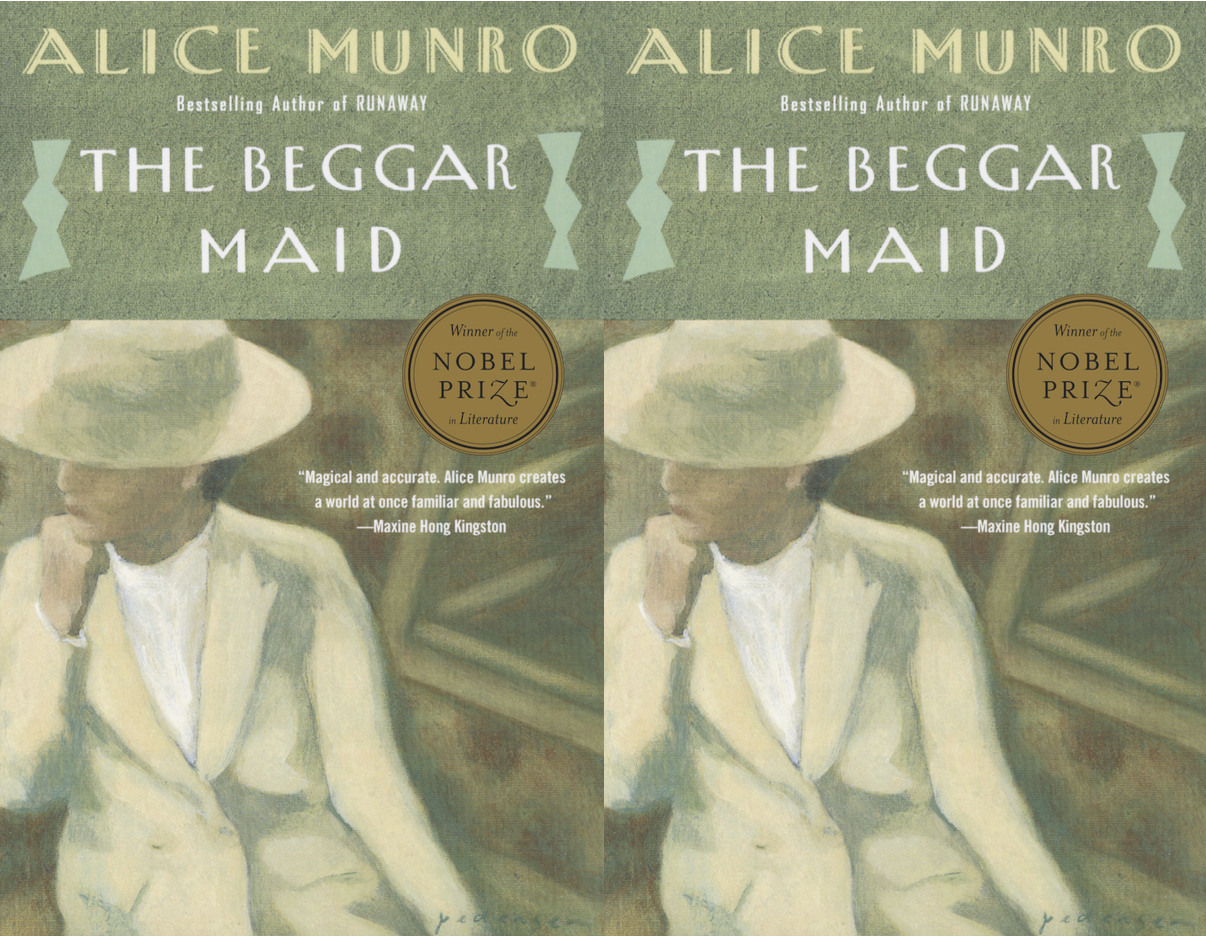 Alice Munro has been a popular literary writer of short stories for decades. She moves from subtle interior discomfort to the most blatant of coincidences without apology. “Simon’s Luck” is a short story from the book that could be called her only novel: The Beggar Maid. The book could also be called a collection of linked stories, all centering around a character named Rose and sometimes around her stepmother, Flo. I love the whole book, from “Royal Beatings” at the beginning to its ending with “Who Do You Think You Are,” but “Simon’s Luck” is the story I most often end up recommending—and for some reason the main time I make unsolicited recommendations of books or stories, this blog excepted, is when a friend is going through a divorce or breakup. “Simon’s Luck” is kind of a brief, painful tour of what Munro talks about when she talks about love.

At the point in the book where this story appears, Rose has made a small name for herself as an actress, but to pay the bills she has taken a temporary gig at a community college. She is young-ish but aging, attractive enough and just famous enough for her relationships with students to be complicated and hostile. At a college party she meets a classicist named Simon, who saves her from a mean-spirited confrontation (a former student responds to her exaggerated tale about accidentally killing her cat with “Now you won’t be able to fuck the cat,” etc.,) and follows her home for the weekend. What follows are five pages of falling in love—all the rolling out of each others’ past, all the first gestures of caretaking, all the ways the life she’s living –  “country life” – comes alive for her when she displays it, detail by detail, for Simon’s amusement. She spins drama from small events, she turns neighbors into characters, she even exposes herself with brave vulnerability, saying about the situation at the party,

It’s good that you’re here…otherwise I’d be spending my time thinking about that boy. I’d be trying not to, but it would keep coming at me. In unprotected moments. I would have been in a state of humiliation.

It’s a live five pages, vibrant with a quality of infatuated attention that spreads out from the beloved to light up the rest of the world, too. And it’s followed by an unbearably empty week of no communication—none from Simon and none, because Rose is very proud, initiated by her. When he has not arrived by the next Friday, all that has been fascinating about country life has turned tedious without him. It rains for three days while she imagines possible scenarios. He is in the hospital, or he has forgotten her, or he is going to be married to someone else. This middle-aged woman who knows from breakups is not going to sit around for another disappointment. After a long, wet weekend of imagining, she packs her car and heads out for good, community college and country life be damned.

She ends up scoring a decent television job. A year or so later, the show is filming on the west coast and a woman from the party at the community college, a world away, introduces herself again to Rose on set. The woman reveals that Simon has died of the pancreatic cancer he’d suffered with for a long time—long enough, we can assume, to include his passionate weekend with Rose. The preposterous possibility, familiar to anyone who will admit to having hoped on the hospital when the phone didn’t ring, turns out, in this case, to be the most likely.

What I return to in the story is the way Munro details the painful tide of infatuation. The sharpening of one’s senses with love, the universally dull obsession of its wake, and the painful, beautiful return to oneself when one has given up the ghost. Munro manages to capture the longing for both states at once, while offering her characters evidence that such an extended ambivalence is impossible—we get one or the other, but not both. But in true Munro style, this evidence is called into question at the end of my favorite paragraph with a three word fragment:

In a prairie town within sight of the Cypress Hills she recognized the change. She had driven all night until the sun came up behind her and she felt calm and clearheaded as you do at such times. She went into a café and ordered coffee and fried eggs. She sat at the counter looking at the usual things there are behind café counters—the coffeepots and the bright, probably stale pieces of lemon and raspberry pie, the thick glass dishes they put ice cream or jello in. It was those dishes that told her of her changed state. She could not have said she found them shapely, or eloquent, without misstating the case. All she could have said was that she saw them in a way that wouldn’t be possible to a person in any stage of love. She felt their solidity with a convalescent gratitude whose weight settled comfortably into her brains and feet…she thought how love removes the world for you, and just as surely when it’s going well as when it’s going badly. This shouldn’t have been, and wasn’t, a surprise to her; the surprise was that she so much wanted, required, everything to be there for her, thick and plain as ice cream dishes, so that it seemed to her it might not be the disappointment, the losses, the dissolution, she had been running from, any more than the opposite of those things: the celebration and shock of love, the dazzling alteration. Even if that was safe, she couldn’t accept it. Either way you were robbed of something—a private balance spring, a little dry kernel of probity. So she thought.

The last three words of this paragraph are a kicker. The story has relieved us of both the fever of love and the numbness of rejection; it has led us to a point where we believe we are better off without the whole shebang. But then the story calls into question what we really love when we are in love—something outside ourselves or merely (well, perhaps not merely) some version of ourselves projected back to us, to which we become addicted and in the face of which, like Narcissus in front of his reflection, we are powerless. With “so she thought,” and the forthcoming information about Simon’s death, we are forced to review our narcissistic assumptions; we glimpse the possibility of a loophole to what has been a grim cycle of sturm und drang. And with that, Munro leaves us with nothing less than the complicated philosophies of the self and the perpetual conundrum of hope.