Home
»
Uncategorized
»
Why I Reread the Sun Also Rises 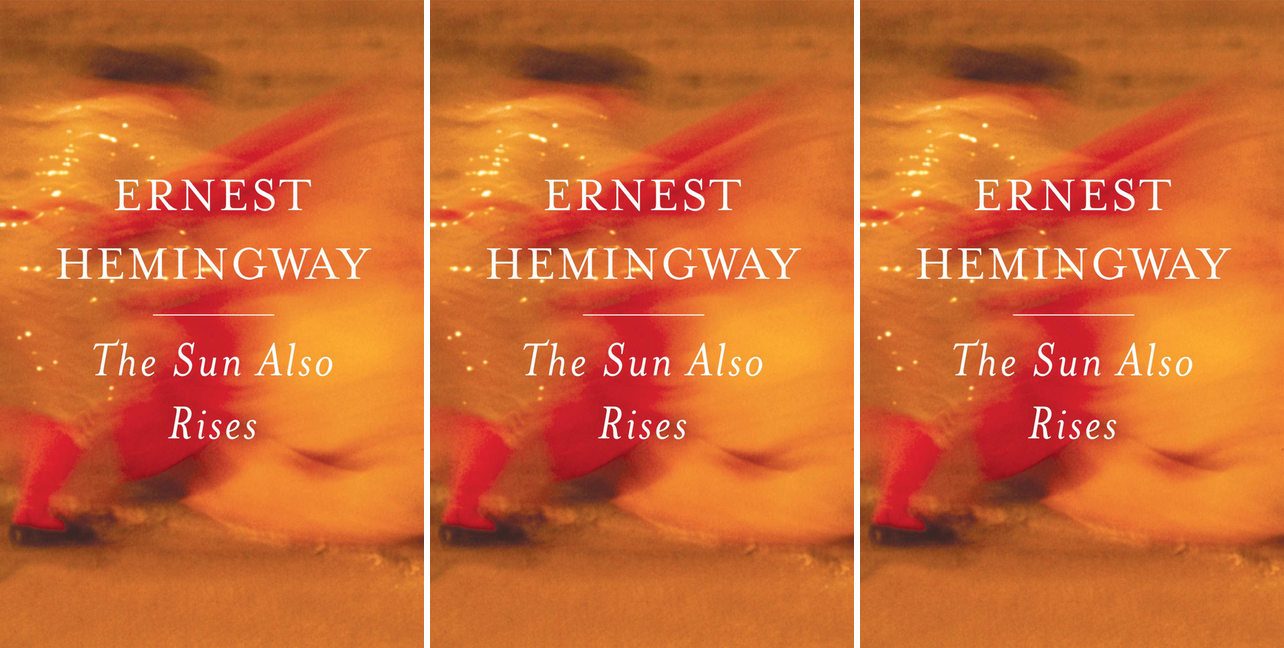 I first read The Sun Also Rises in college, in a survey course of the American Novel. I don’t know if such survey courses even exist anymore, or if Hemingway is still taught to our undergraduates. But I took this class during springtime in Kentucky, which is long and warm, and I would read the book on the largest campus lawn and then shuffle into class with grass stains on my skirt (we had to wear skirts) and listen to my favorite professor tell me what critics had to say about Hemingway’s biography, his writing style, his personal politics, his views on women and Jews. I would dutifully underline the passages the professor read aloud. Sometimes I would take margin notes and sometimes I wouldn’t, leaving me a little confused, now, as I look over the same dog-eared paperback copy, of underlined passages like the following conversation between Jake Barnes, Brett Ashley, and the count:

The count stood up, unbuttoned his vest, and opened his shirt. He pulled up the undershirt onto his chest and stood, his chest black, and big stomach muscles bulging under the light.

Below the line where his ribs stopped were two raised white welts. “See on the back where they come out.” Above the small of the back were the same two scars, raised as thick as a finger.

I remember liking the book a lot, and letting the unfamiliar place names wash over me—all those streets in Paris, all those cafes in Spain. I had zero orientation to Europe, especially Europe in another time, and I might as well have been reading about aliens. I doubt I could have told you what war they were all referencing. If memory serves, and if we can figure out WHAT it serves, then I have to say that, remarkably, I don’t remember registering the impotence issue. At all.

Fast forward a few years to the second time I read The Sun Also Rises.  This was in my MFA program, which shared required literary theory classes with PhD students. The idea was to somehow escape reading literature as a consumer—which means, I guess, that you don’t consume literature without thinking and acknowledging its means of production. We read the book as a text, produced no differently than other texts except that it courted the dangerous reputation, like all art, of having been inspired. A concept we unpacked post-haste. I resisted this approach but have since come to appreciate it, with its conclusion that art/literature may be set apart by its ability to seduce readers into imagining a kind of transcendent experience, which temporarily assumes a unity around the assumptions a text sets out. Powerful, seductive, blind, and destructive. But other things, too. Kind of like how sex occupies a space that can be great or awful because of the junction it creates between humans, all the power relations.

There are other things I remember about reading The Sun Also Rises a second time. My pleasure in the character of Brett Ashley, that Hemingway-imagined combination of impeccable class and fraternal bon vie. The way the impotence issue suddenly seemed obvious, clarifying for me a good deal of the dialogue as well as Jake’s brief forays into interiority. And by that time I had become interested in all the fictional versions of living as a writer. Jake is a journalist, after all, and the novel is peppered with novelists like Robert Cohn and Bill Gorton. I was curious about the way they shuttled between Europe and the United States and didn’t seem to let the money issues get to them. The money issues are there, by the way, always in the background. We understand a lot about Cohn’s finances, and even get Jake’s checkbook balance, before and after he pays his bills.

Years later I went to Paris for the first time, alone. I spent five weeks there. Walking, mostly. And I reread The Sun Also Rises because I found an English copy of it at one of those stalls on the Seine. I saw all those streets I read about in college, all the Rues. I saw a few of the cafes, some with different names. I crossed the bridges that Jake Barnes says he loves to cross in Paris. I regarded the squatting silhouette of Notre Dame (Hemingway’s words). I read the book, mostly, in Luxembourg Gardens, and I found myself marveling at the emotional pressure that builds up behind all his brief, layered observations.

I thought of what another professor, a jaded traveler and deconstructionist, had told me about Paris—that it’s used up, that it’s just like America only with better light. That if you want to have a real travel experience you go somewhere Sephora hasn’t reached. I had thought about that before I booked the trip, wondering if it wasn’t hopelessly conventional of me to want to see Europe, that tired old continent. But I saw it, and have seen it since, and it doesn’t get old for me, really. And neither does The Sun Also Rises, whether or not Hemingway is imitated, constantly and poorly. Whether or not he is a stylist. I thought a lot about the danger of studying things before you experience them, and all the things that interfere with the way you experience something—to enhance the thing or detract from the thing, whichever. And that may be the beauty of rereading a book or revisiting a place. Some of the interferences of your past experience are illuminated for you, and maybe you can begin to believe that the future holds more of the same illumination, if you’re lucky. Hemingway might say it’s pretty to think so.