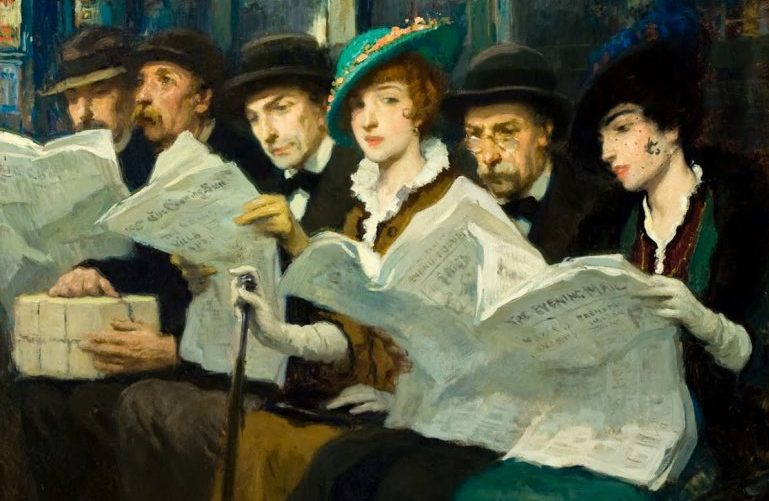 Abigail Williams’ compelling new book, The Social Life of Books, opens with an account from Dorothy Wordsworth’s journal about time spent with her brother William in April of 1802. After a walk among the daffodils that would ultimately inspire lines from Wordsworth’s well-known poem “I Wandered Lonely as a Cloud,” the Wordsworth siblings retired to a tavern, ate dinner, then joined one another by the fire to read aloud a few choice literary passages. Abigail Williams highlights a particularly heartwarming passage from Dorothy’s journal:

William was sitting by a bright fire when I came downstairs. He soon made his way to a library piled up in a corner of the window. He brought out a volume of Enfield’s Speaker, another miscellany, & an odd volume of Congreve’s plays. We had a glass of warm rum and water—we enjoyed ourselves and wished for Mary.

Among the many paradoxes of life in the tech-obsessed 21st century is the fact that we sometimes find ourselves yearning for an outdated simplicity precisely because we’re so tied to innovations in entertainment and social media that constantly hold our attention. For this reason there’s a market for “digital detoxes” and “tech-free vacations,” expensive ways of “unplugging” us and separating us from our tech. We even have software that prevents us from accessing “online distractions.”

This is also a curious paradox of capitalism, the idea that we’re willing to pay someone to draw us away from something we desperately want. It suggests a form of acquiescence or powerlessness that perhaps we’re too ready to embrace.

Even with so many entertainment and tech distractions available to us, I can imagine the fireside scene that Dorothy Wordsworth recounts sounds at least as appealing in the 21st century as it does antiquated. Sitting by the fire, sharing a cup of something warm and gently inebriating, and reading aloud could be something out of a Christmas commercial, an image designed to move us to feelings of warmth and comfort and romantic simplicity. To the extent that these things are marketable, they’re indicators of some very real desires, particularly the desire to have “unplugged” and relaxed social experiences.

Perhaps it’s the coziness of the Wordsworths’ scenario that appeals more than its literariness; but even the concept of sharing narrative miscellany, or even piecemeal phrases that delight or mystify or intrigue, has contemporary resonance. More than a few times I’ve found myself at a party that has either evolved or degenerated into a “YouTube party,” where merry gatherers take turns pulling up funny or creative or horrifying YouTube videos to share and react to with others. Relatively new phone and camera technology certainly enables the ubiquity of YouTube videos drawn from the otherwise unremarkable circumstances that give rise to them: the run-of-the-mill local newscast that becomes legendary when something goes awry, or the candid shots of children or pets that fueled 90s TV hits like America’s Funniest Home Videos. But technology as such is not what engenders the desire to watch these clips together, without pretense.

It’s important to recognize, then, that reaction—not discussion—is at the heart of these kinds of social practices, whether oriented around text, as in the case of the Wordsworths, or around video, in the case of the YouTube party. We certainly have book clubs today, discussion-based groups for which the reading happens silently and alone before the meeting. And we have public readings, at which an audience gathers to hear a kind of prepared performance. Slam poetry, poetry readings, and book tours all involve hearing the sound of language in group or public settings, though none of these is quite the same as what Dorothy Wordsworth describes. Likewise, when we gather to react to YouTube videos, the point is not to have a conversation about or to analyze what we’re seeing, nor to esteem the video as a performance, to appreciate its cinematic qualities. The point, rather, is to socialize around a common stimulus.

My question, then, is why we don’t participate more often in this form of social reading. If gathering around the hearth with tipple and Thoreau sounds appealing, even if it also sounds antiquated, why don’t we do more of it?

That the technology of the book (or the technology of print, even digital print) has to some extent given way to other technologies, such that video narratives and miscellany—like what we find on YouTube—are at least as ubiquitously shared as textual passages, is too easy an answer. As Williams tells us in The Social Life of Books, part of the value of social reading was the ability to share stories and snippets aloud with those who couldn’t read, and thus to broaden the sphere of participation in reading. Today, by analogy, access to literature remains unequal, even if basic literacy is more widespread now than it was in the eighteenth-century. Access to technology is unequal as well, though online “content” is arguably more commonly accessible—or feels more widely familiar—than literary passages.

To the extent this is true, it’s a shame. Not only because assumptions about the “high cultural” value of literature are barriers to what could be the genuinely pleasurable experience of social reading aloud, but also because—in a catch-22 kind of way—bringing literature more seamlessly out of the classroom or the “public reading” and into the social realm is a powerful means of weakening barriers to accessibility. As we find ourselves amid the holiday season, consider spending some time with your favorite people reading some of your favorite things aloud. Despite advances in technology, social reading is still fun.