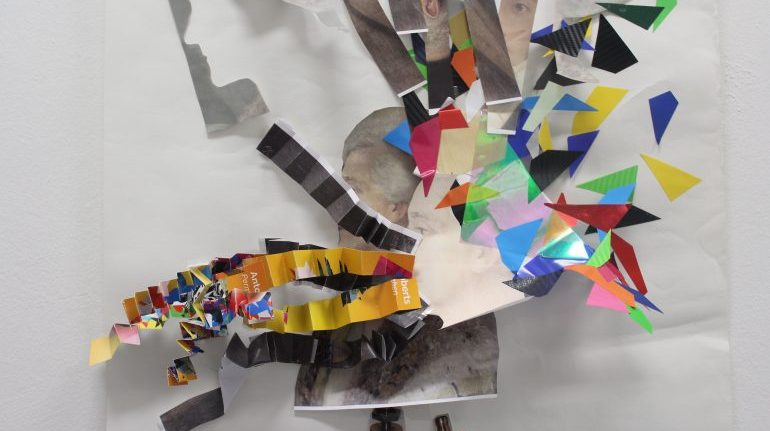 The first time I took part in an Exquisite Corpse, I was an undergrad in Lisa Russ Spaar’s workshop at UVA. I like to imagine she performed the exercise with her mentor, and he with his, and on and on in a long lineage of collaboration and gifting that befits the exercise itself. Here’s how one variation works: each student writes the first line of a poem on a sheet of paper. (Fiction and visual art are fair game, too.) The line can be long or short, full or fragmentary. Students are given a minute or so before passing the paper to the left; now holding her partner’s paper containing the first line, the student writes a second. Then – here’s the fun – that student folds the paper so the first line is concealed and only her line is visible. And the paper moves like this around the room, the classroom a factory of folding and writing, until our original paper comes back around as a poem to which each student has contributed a line.

The point is to create, not to publish what we’ve made. This exercise is vital for the writer who feels that the latter is master to the former. (Repeat after me, people: publication will not make me, rejection will not break me. Publication will not make me, rejection…) And the Exquisite Corpse is joyful creation. That’s reason enough for all writers to practice it. The only time my students have cried from laughter is during the Exquisite Corpse – even students in my prison class. Those kinds of tears, of course, are seldom shed in that universe. We laugh because we experience surprise, humor’s main ingredient. Afterwards we read the poems aloud to our fellow writers whose mouths are agape in waiting to hear with what clamor or harmony our lines speak to each other. Every poem should hold us this captive. A fresh image is an unexpected image, and a defied expectation transforms us, or should. A person caught off guard must reflect on their belief system – define what it was, and how it’s changed – and grow to fit its new shape.

The Exquisite Corpse goes to work on the fear-slash-hatred some may harbor toward poetry. The inevitable mischievous laughter from the corner of the room that’s putting out witty or slightly vulgar lines is the sound of bad blood being soothed. Words that can be cruel can also be used for delight. Language is multivalent. This awareness is among the first steps in being a poet, and could be the beginning of a long courtship, perhaps a hard falling in love with poems.

Whatever lines they produce, participants are forced not to consider the poem’s overall “message.” The unit of a poem, the Exquisite Corpse whispers, is the line. It nudges us toward concretion. Keep the ‘truth’ and ‘fate’ out of it. Bombastic lines that “sound poetic” are the ones we roll our eyes at. We want desperately to clamber out of the “abyss of the soul” or slither free from the grimy, veiny “hands of time.” We learn what works and what doesn’t by listening, collectively.

Each poem, by putting several heads together, enacts a mind that one alone can never possess: associative, wildly imaginative, often schizophrenic. The French Surrealists, authors of the exercise, were in the business of trying to get at our true statement, “outside all aesthetic and moral preoccupations” and uncensored by “reason.” Exquisite Corpse poems may stagger from “Lilies sweet as wine” to “Getting drunk off wine” to “In the moonlight the man pisses off the boardwalk” in three lines flat. But sometimes the poem coheres, poignantly, as if a connective spirit ghosted the classroom. Thus we have no choice but to believe for a moment in the possibility of actual unity.

Participants start to understand that any group working together can produce a composition like this. We start to see people as potential collaborators. “I could play this back at the dorm.” We realize we’ve built something like a house, each line a slat, in which we all live for the time it takes to write and read and remember the poem. Our communal work is written on the page itself as vestiges of folds. Afterwards, touching the material object transports me back to the prison classroom. Each line’s handwriting conjures the particular student. Performing the exercise echoes Lisa Russ Spaar, the French surrealists. The paper evokes the tree from which it was pulped and pressed. And so on.

Reading and listening to our poems, we work to find sense in them. Meaning-making is our most beautiful MO, and with enough imaginative flexing (which is the source of the poem itself), we see the connection among each line. The whole poem is metaphor: it puts eighteen unlike things in relationship with each other. This is the Exquisite Corpse’s gift. It shows us that to live in the world together means to co-create.