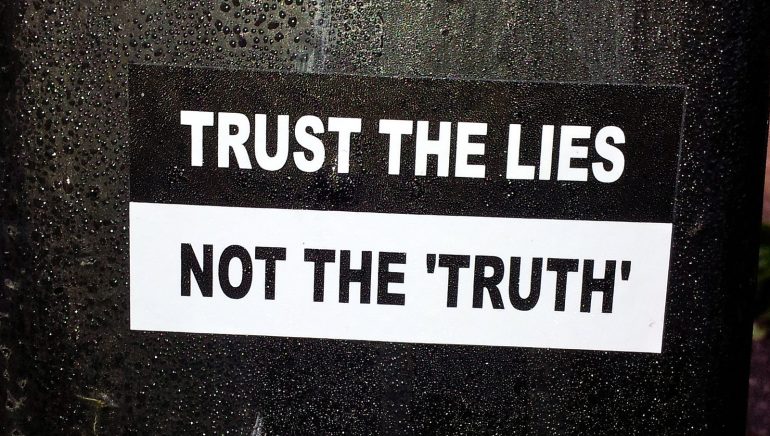 The truth: we’re toeing the lines of what it is and is not as well as how much does it matter and whether or not there’s anything to do about it, as if to say a collective conscious and subconscious onslaught is being fought seven billion ways, seven billion times a day, every day, always.

The only “truth” I’ve come across consistently amongst varying individuals of varying demographics is that we decide truth for ourselves. To put truth into units so freely calls for a measuring system or scale, and who’s to say one truth is more or less true than another for another? Where does a truth begin and end? Is it something to be possessed? Does its length, magnitude, depth, girth, whatever have anything to do with its impact, clarifying quality, virtue, whatever on anyone? Does the sharing, and therefore the extent of that sharing, of any given truth determine its truthiness? Take this lyric from Manchester Orchestra’s “Simple Math” into consideration:

What if I was wrong and you had never questioned it?
What if it was true that all we thought was right was wrong?
Simple math, the truth cannot be fractioned
I imply I’ve got to get it back then

The real battle is seemingly universally internal. And with seven billion different ways to tell the truth, it’s no wonder we’re often told to rely on ourselves to find and define it. Thus, consider this yet another call to broaden the diversity of your book shelf/record collection/film catalogue/etc.—if truth lies within, the need for inclusive exposure is becoming increasingly urgent simply for the fate of truth itself.

This is “We need to diversify the canon!” emphasized and extended—for women, for PoC, for LGBTQ+, for the poor, for anyone lacking representation in classrooms, on stages, in the credits, for the sake of lineage and therefore the sake of the future. This is to say historical texts, and not just their existence but our commitment to their lessons, need to exist and deserve the same commitment as Harry Potter and the [insert your favorite], On the Road, Jane Eyre, and Uncle Tom’s Cabin.

This is a call for the creation of Newspeak’s decoding enigma before the doubleplusungood reduction of funds and access to knowledge. When Frederick Douglass wrote that he would not expose the route he trekked out of Baltimore into New York knowing a largely white audience was reading, he demonstrated that knowledge is power in the face of foes—Calvino writes, in “The Form of Space,” similarly and differently the same sentiment: “I was the one at whom the future smiled.” Is the future smiling at you?

“Listen, I’ve read everything in your file,” she said. “Why don’t we just take you in for the procedure right now, and we can talk afterwards.” She walked beside me down the hall where a nurse guided me into a room, and twenty minutes later, it was over. I took a cab back to the apartment, and before the long night’s sleep that followed, I promised myself I would plan the rest of my life in the morning.

It comes from online literary magazine ROAR, whose dedication to “literature and revolution by feminist people” provides a platform for stories written by the people whose lives are directly impacted by current issues that sometimes receive completely false representation or treatment from the media, the White House, anyone-else-who-doesn’t-experience-those-things, etc. This is from ROAR’s abortion series, written by Betty Hafner, story number 173. These are the stories as visceral and raw as they come, for you to make an assumption for yourself with the story between what you believe and what you hear in the news.

Now, reading 173 stories on abortion will not make you an expert on it, nor will it suddenly make your voice more prominent when it comes to how that topic is dealt with by the government or the media or whoever else other than yourself. Nor will reading every book dedicated to the criminal justice system suddenly qualify you to be the department’s chief. This is still a call for all of us to diversify our catalogues, as that continues to be an underlying issue, but we all know actions speak louder than words.

Perhaps the core difficulty in discovering truth exists in lieu of our inability to trust.

Every protagonist has been somewhere you and I haven’t, whether they are a maid or a slave or a school boy or a sailor. Every historical text introduces us to communities in which we perhaps could see ourselves living, absent of what it was actually like. But we are also the protagonists of our own lives, the bodies in the pages of the books about our cities. To cherish their existence, their connectivity with everything around them as a part and as a whole, is in part a form of trusting such lives are worth living, such struggles are capable of overcoming, such fights will be fought and such outcomes can be attained.

To believe the truth is in hiding and worth finding is merely a case of having motivation—to trust it will come, despite all unfavorable odds, takes the perseverance of manning a tiny boat against tall waves, a hobbit at the clasp of all of life’s power, a neighborhood in despair creating a musical mecca out of its only bar, even simply maintaining an individual mind in a society where such an act is punishable by death.

And if we are to set the bounds of our own truths, perhaps we too must trust ourselves first, and trust others, to do so together.