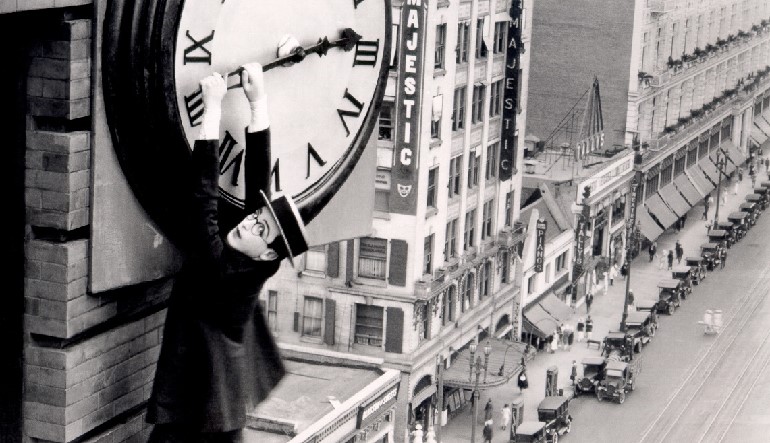 One theory on the nature of laughter is that it is the moment we’re released from fear: the shadowy figure in the corner is a broom, the monster is a friend wearing a mask. Dread and confusion build, and then we’re dropped, joyously, back into harmless reality. Tragedies end with everybody dead; comedies end with a wedding. Laughter is a celebration of safety, and of things making sense. It also leaves us, if only briefly, defenseless.

The very boisterousness of laughter is innately social. It’s communicative, and maybe even serves an evolutionary purpose. The reason it’s so loud, that our faces contort and turn red and tears stream from our eyes, is because it’s meant to be shared; we’re telling everyone else that a threat has evaporated. Jokes take advantage of this journey from uncertainty to release—this is where we get the structure of setup and punchline.

I think about jokes a lot when I read Wislawa Szymborska. Her poems build the way jokes do, with irony, misdirection, and distraction: setups that leave you completely unprepared for her disorienting final verses. Instead of leading to certainty, they take you somewhere else entirely. Her poems swell calmly, with melancholy insight or wry humor, but the last lines are regularly moments of shocking collision. In the wreckage of mood and language, meaning pivots and surprising conclusions are drawn. The floor falls out from beneath you, but you don’t land safely. Sometimes it feels like you don’t land at all. When I first read Szymborska’s work, I struggled to explain to other people what made it so uniquely astonishing. “It’s like her poems have punchlines,” was the best I could come up with, “but they aren’t funny.”

Wislawa Szymborska was born in Poland in 1923. She was sixteen when the Nazis invaded, and twenty-two when the war ended. She began writing poems in the early 1940s, and many of these were overtly political—she disavowed them, and they’re rarely included even in the most comprehensive collections. To say something along the lines of “the war cast a shadow over her life and work” would be a cliché, and not entirely correct—her poetry is unflinching without being grim, and though torture and hatred are repeated themes, she’s just as likely to examine mortality in a poem about first love, or a cat who doesn’t realize that its owner has died. But it is true that her work reckons seriously with the juxtaposition of happiness and tragedy, of consciousness’s possibilities and its limits, and of the measure of individual life against the vastness of human history in a way that point you unavoidably to her personal and national biography. She writes with a clear-eyed humanistic spirit, reminding herself why she wants to live even when she knows her choice doesn’t matter to anything greater than herself (Robert Hass said she was “a joy—though it is a dark kind of joy—to read”).

One of her most representative poems, “The End and the Beginning,” begins with frank and immediate detail:

After every war
someone has to tidy up.
[ . . . ]
Someone has to shove
the rubble to the roadsides
so the carts loaded with corpses
can get by.

Someone has to trudge
through the sludge and ashes,
through the sofa springs,
the shards of glass,
bloody rags.

As the poem continues, the war grows remote: “All the cameras have gone / to other wars,” and citizens “are bound to be bustling nearby / who’ll find all that / a little boring.” In the final verse, she says, “Someone has to lie there / in the grass that covers up / the causes and effects / with a cornstalk in his teeth, / gawking at clouds.”

Though her tone may seem aloof, it’s a deceptive lightness (“Don’t bear me ill will, speech, that I borrow weighty words / then labor heavily so that they may seem light” is the closing couplet of “Under One Small Star”). If she appears on occasion to hold tragedy at arm’s length it’s because the world, with distance and time, holds it considerably further. In fact, the way she structures her poetry is a reaction to how certain observations have dulled with decades of overuse. “A Contribution to Statistics” makes up percentages about the human race that range from the sarcastic to the poignant: “those who always know better / —fifty-two” is followed by “living in constant fear / of someone or something / —seventy-seven” and “capable of happiness / —twenty-something tops.” But in the end, she concludes: “mortal / —a hundred out of a hundred. / Thus far this figure still remains unchanged.”

Szymborska’s poems meander deceptively, exploring their themes through digressions before delivering a summation in powerfully few words. Though “Born” and “Absence” were written thirty-eight years apart, they follow this structure closely. In “Born,” the narrator meets her partner’s mother and is struck by the dissonance between the woman’s maternity and her frailty; the shock leads her to reflect not just on mortality but on the private lengths we take to forget its inevitability. In “Absence,” a woman considers the other daughters her parents would have had if they hadn’t married each other, a simultaneously lovely and chilling example of one of Szymborska’s most recurrent themes: amazement at existence itself. But following such distractingly lyrical ruminations, both poems close with lines so short and sudden and laden with meaning that they deliver the jolt of a book slamming shut: “‘This is my mother’ / was all he said,” and “Yes sir, that’s all.”

Not surprisingly, many of Szymborska’s poems end on the idea of humor—even if they are not themselves funny. The final lines of both “Reality Demands” and “Slapstick” contain the word (depending on the translation) “laugh,” “laughing,” or “laughter”; the last line of the poem “Example” contains the word “joke.” Every instance is juxtaposed ironically with words like “blood” and “violence,” or references to sites like Hiroshima or Guernica. Perhaps nothing else highlights Szymborska’s own awareness of, and admission to, this unusual poetic device—as well as the way she turned it into an obverse of itself. The poems in question aren’t funny—with the possible exception of the more cartoonish “Slapstick”—they’re bittersweet, reflective, their sadness laced with optimism (or vice versa). They’re about the distance between joy and pain, and the way that neither ever completely erases the other.

In her 1972 poem “Theatre Impressions,” she describes the sensation of reading her poetry better than anyone else ever could: “For me the tragedy’s most important act is the sixth” is the opening line. This is the final stanza:

But the curtain’s fall is the most uplifting part,
the things you see before it hits the floor:
here one hand quickly reaches for a flower,
there another hand picks up a fallen sword.
Only then, one last, unseen, hand
does its duty
and grabs me by the throat.