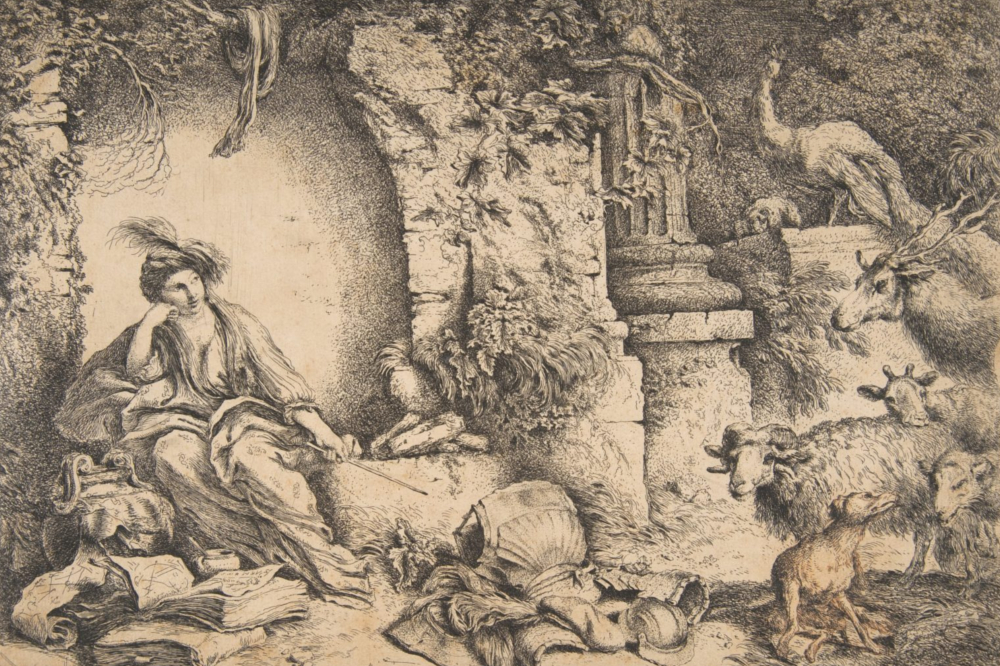 In such ancient stories as The Odyssey, women, who are often archetypes and who typically exist in the margins, are enlivened when their stories are told by contemporary writers, freeing them from their limited roles (mother, wife, evil temptress bent on bringing about the downfall of men). Retellings of these stories, too, are rich with contemporary themes that contribute to the reader’s understanding of the weight of their release, such as the injustices and double standards women face in a patriarchal society. Retellings by Margaret Atwood (The Penelopiad), Madeline Miller (Circe), and Colm Tóibín (House of Names), in particular, give voice to silenced women.

In The Odyssey, the subject of Atwood’s 2005 novel, Penelope is famed far and wide for her faithfulness, purity, and well-intended scheming to preserve these qualities when besieged by a pack of suitors clamoring for her hand. She is a beautiful “radiant woman” with “lovely cheeks” who is skilled at weaving. She constantly weeps for her husband and virtuously keeps mostly to her chambers so that she can shield herself from those debauched suitors. But beyond these details, we see little else of her. Atwood’s Penelope, on the other hand, surprises with more nuanced character traits and an enhanced history. She is less calm, cool, and collected, and not considered beautiful at all. Instead, she’s somewhat insecure and fearful, and her intelligence, rather than her beauty, is her primary feature.

Nevertheless, she’s still recognizably Penelope—chaste and loyal—but she is not the patient wife swept off her feet by Odysseus’ stories of glory, merely accepting her husband’s infidelity and general misbehavior during the two decades he’s been away. Penelope admits,

I knew he was tricky and a liar. I just didn’t think he would play his tricks and try out his lies on me. Hadn’t I been faithful? Hadn’t I waited, and waited, and waited, despite the temptation – almost the compulsion – to do otherwise? And what did it amount to, once the official version gained ground? An edifying legend. A stick used to beat other women with.

Atwood’s Penelope is angry, pushing against the archetype she’s become, frustrated that men are using it against other women and resenting her own unintended complicity.

Perhaps where Atwood’s Penelope gains the most agency is at Odysseus’ homecoming. Right from the start, she recognizes Odysseus through his disguise as a beggar. She says,

I didn’t let on I knew. It would have been dangerous for him. Also, if a man takes pride in his disguising skills, it would be a foolish wife who would claim to recognise him: it’s always an imprudence to step between a man and the reflection of his own cleverness.

She takes pleasure in letting this disguise slide while Odysseus picks off all the suitors and bonds with his son in doing so, and then she delights in teasing Odysseus when he reveals himself to her. “The hardness of my heart was a notion I was glad to foster,” she says, putting off the moment when she will throw herself at Odysseus and “shed a satisfactory number of tears.” Here, Penelope is more than the dutiful, stricken, tearful wife. Yes, she sheds tears, but she is also tricky in her own right and has a sense of humor about the situation, too.

Just as the archetypal mother and wife is livened in The Penelopiad, Miller renders a more complete Circe, the archetypal temptress. Miller, whose book was published last August, debunks the version of the goddess who—“her heart aswirl with evil”—changes Odysseus’ men into pigs, although they are “all innocence,” then screams and falls to the floor, clutching at Odysseus’ knees when he charges her with his sword. In Circe, the nymph is more pitiable than sinister; she is the unloved and oft ignored child of Helios and Perse. With her voice of a mortal, she is undesirable and loathed. When she confesses to using magic to change Scylla from nymph to monster out of jealousy, Zeus and Helios agree that Circe must be banished. “I should say goodbye,” Circe thinks. “But my cousins flowed away from me like water around a rock. I heard their sneering whispers as they passed.” Her grandmother turns away from her, and even her mother acts affronted that Circe should try to say goodbye. Nobody loves her.

Perhaps most pivotal in Miller’s version of the myth is that Circe is not the evil witch who changes men into swine simply to suit her evil will, as Odysseus paints her in The Odyssey. The first time sailors wash up onto Aiaia’s shore, Miller’s Circe is eager to host them, throwing open her door and finding pleasure in seeing them well fed. “I could not stop smiling,” she says. “The fragility of mortals bred kindness and good grace. They knew how to value friendship and an open hand. If only more of them would come.” Her naiveté can’t last, though, and when she sees them noticing her lavish goods and her aloneness, she takes precautions, mixing their wine with a potion. But before she can even speak the spell to change them, the captain brutally rapes her; when he is finished, another man clamors to be second. It is then that Circe is able to utter the spell, turning the men into the pigs they have proven themselves to be. The damage has been done—when more sailors come, she sees the evil glimmer in every one of their eyes and changes them all.

So, by the time Odysseus and his men arrive on the island, changing men into swine is old hat for Miller’s Circe. She’s accustomed to men’s barbarism, and Odysseus’ crew proves to be no exception, even by his own admission. When the great captain comes to save his crew, Circe sees that Odysseus isn’t like the others. He talks openly about his wife and doesn’t look at Circe with violent lust. He doesn’t rush Circe with his sword, although he thinks about it. Instead, they’re civil as they make an agreement, and, in the year that follows, the two relish their time together as peers, sharing stories and a bed. Eventually, unbeknownst to Odysseus, Circe becomes pregnant with Odysseus’ child, and when the baby is born, she becomes the fiercest of mothers.

In the end, goddess though she may be, Miller’s depiction of Circe is—intentionally—radically humanizing. She is a woman like any other who yearns for connection and suffers when denied it. Up to a point, she finds meaning in her solitude, gardening, weaving, and making potions for good or self-defense. She fines great purpose in motherhood. She is a woman who wants a husband and a family. In other words, she is far from the evil witch Odysseus makes her out to be in The Odyssey.

Clytemnestra, too, finds some salvation in the hands of a contemporary author. Clytemnestra is Penelope’s foil in The Odyssey and widely recognized—and reviled—as such. Where Penelope is pure and faithful and admirable, Clytemnestra is adulterous and scheming and evil. She resists Aegisthus for a time, then he sweeps her off to his house, and they leave as “lover lusting for lover,” which makes her complicit in the adultery. Her infidelity is unforgivable. Her husband, Agamemnon, calls her “accursed,” “treacherous,” and “that whore.” He tells Odysseus when Odysseus encounters him in the Underworld, “there’s nothing more deadly, bestial than a woman / set on works like these—what a monstrous thing / she plotted, slaughtered her own lawful husband!” Clytemnestra’s deceit is enough to tarnish all women, even the honest ones, in Agamemnon’s eyes.

Tóibín’s 2016 novel doesn’t work to merely correct the double standards inherent in the story Agamemnon tells Odysseus—it reveals Clytemnestra’s justifiable anger. For Tóibín’s Clytemnestra, Agamemnon is not the great, proud war hero he appears to be (and indeed, he’s painted in a poor light in Pat Barker’s recent The Silence of the Girls, another novel that claims agency for ancient women). He is pompous, callous, cowardly, and even naïve for being so righteous. That he would willingly submit his daughter to sacrifice, simply to secure a fair wind from the gods, is unpardonable. He won’t even look at his wife and daughter after his deceit is made clear. Instead, he jousts with his young son, Orestes. “The longer the jousting went on, the more I realized that he was afraid of us,” Clytemnestra acknowledges, “or afraid of what he would have to say to us when it stopped…He was, as he continued the game, not a brave man.” For the sacrifice, he has his daughter and wife gagged, although he quickly orders that Clytemnestra be shut in a hole so small she can neither lie down nor stand, and she is kept there for three days with no food and little water. When he sets off for war, he sends Clytemnestra, still weak from her imprisonment, back to the palace with four guards, and after retreating to her chambers, she wakes the next morning realizing she is a prisoner. Grieving the death of her daughter and her own mistreatment, it is not surprising, then, that Clytemnestra turns against her husband.

Upon his return from war, when her husband approaches with Cassandra shining in a dress of deep red by his side, Clytemnestra turns the other cheek. “Even when I saw that in his chariot there was a woman standing with him and she was young and beautiful,” Clytemnestra says, “I gave a grand, distant smile to both of them and then let it soften into warmth.” Cassandra surveys her surroundings “as though this were a country that in her dreams had always belonged to her” and catches Clytemnestra’s eye “haughtily…as if [she] had been on earth to serve her.” Still, Clytemnestra does not react, which is exactly what Agamemnon expects of her, and he says only that Cassandra is part of the spoils of war, although it is clear that the relationship between the two is much more, particularly so when Agamemnon demands that Cassandra be quartered near him. Yes, Tóibín acknowledges, Clytemnestra commits heinous acts, but her acts are no less heinous than those of her husband.

Motherhood proves to be crucial in the stories of all three of these women. It fulfills Circe. Penelope holds on to her one true companion, her son, when she is so far from home and husband. Clytemnestra’s daughter’s murder prompts her anger toward her husband and acts as a catalyst for her every move thereafter. “A mother’s life is sacred,” Penelope asserts in The Penelopiad. “Even a badly behaved mother’s life is sacred – witness my foul cousin Clytemnestra, adulteress, butcher of her husband.” In Atwood’s retelling, Clytemnestra’s crimes are not pardoned by the injustice she’s suffered at the hands of her husband, but she still gets some grace.

I have felt so frustrated by the briefest snippets we get of these women in The Odyssey. They are flat, mentioned only in passing and only as functions in a man’s story. Even though liberties are taken in these retellings, as they must be, I relish the portraits these writers paint: they unearth these women as people. These stories reclaim voices that were silenced in their time, reviving them in ours.